Via Twitter, Tor Books have confirmed that they anticipating publishing the fifth Sword of Shadows novel by J.V. Jones, provisionally entitled Endlords, in 2015. 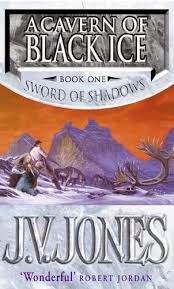 In response to a request for an update by a fan, Tor replied:


"J. V. Jones is currently hard at work on the 5th Sword of Shadows novel, which we're hoping to bring you sometime next year!"

The previous volume in the series, Watcher of the Dead, was published in 2010. Jones her not updated her website or her Twitter since 2011, leaving readers pondering the fate of the series. However, lengthy gaps between volumes are not unusual: the third volume, A Sword from Red Ice, was published in 2007 five years after the second, A Cavern of Black Ice.
Posted by Adam Whitehead at 17:26

Yay! I hope we get more than 400 pages this time.
Fantastic series.

Good to hear! I quite enjoyed the first 2 novels but have held off on the rest, not wanting to commit any deeper to what was starting to look like a 'dead' series.

Time to cross the fingers and start catching up.

Nice. I'm glad I waited til last year to begin this series, so I shouldn't have to do a complete re-read before this comes out.

Wert, any word on if Endlords is officially still the final book in the series?

It was, then it wasn't, then I think it was suggested it was again.

Right now I'm assuming it's the penultimate volume and it's still a six-volume series. If it is the last one, then great.

Yay. I've been waiting for a long time for news on this. Thanks wert.

I devoured these books.

That seems like a non-update update. Given that we're in March, "sometime next year" is pretty vague and seems more like a reasonably safe guess than it does a basis for new information.

Thanks for sharing this news! :-)

@Bonzi: I disagree, as many fans (including myself) have been clamoring for any news AT ALL, considering JV's silence these past 2-3 years. I for one am excited to hear that everything seems to be okay with her and she's still working on the series.

Glad to hear something is happening even if it's still that we have to wait so, so, long but agree that it's kind of a non-update. Saying it's being worked on is kind of a given (i.e. we damn well hope so!)- so I'd expect a little more in terms of news TBH, considering it's being so spartan as to be nil. I'm kind of sad to say I don't have any impetus or urgency around this series anymore, it's like a fire that's almost burned right down to the embers...:(

Im over it too....it seems JV Jones doesn't give a rats A about the people who bought the previous books in good faith......its very poor form to write at the beginning books that were gripping and exciting and then fizzle out.....if you have no intentions of writing in reasonable time frames Jones, don't bloody write at all....just dangle the carrot take the cash then P off...there are other authors that respect their readers unlike you!

I keep hoping that this isn't a Captal's Tower a la Melanie Rawn. That was so very disappointing. I have held on to the fact that J V took years before. While I would in one sense like to write it off and say never mind I cannot. I have to know. For one things I want to see if Ash meets Simon. Dear old Dad is magic too.

Books of this calibre take time to write. I am looking forward to Book 5 with eager anticipation, and I am sure it will be worth the wait. I had to wait 12 years for one of Jean M Auels "Earth's Children" books!

I too waited years for the conclusion of Jean Auel's earths children series (my kids reached adulthood by the time the last book was published)so by comparison the wait for each J V book is not so bad but I do get annoyed with the lack of news. If I know I have to wait 2 Years for the next one, I can be patient. I e.mailed the GB publisher who had no information and directed me to the US publisher. Bit of a slog. Please J V at least update your own web site. Hope the author and the readers live to see publication! Poor Chedd

at least she is still alive !

Just read watcher of the dead, which was really a breeze after reading the Malazan book of the fallen series by Erikson. So I am ready for more. Meanwhile some Patrick Rothfuss and after that maybe finally the last wheel of time volume. When it is out before George RR Martins next ASOIAF (another long wait) I'll be happy.

This is one of my favorite (if not the favorite) series. It’s rare to get such quality. I’d gladly wait another five years for this kind of writing. (still hope it won’t take that long.)

Wow. 2015. When I started reading this series the first three were finished and the book I bought said a 3 part series. I don't like to start a series that isn't finished. I was happy I could finish the series. The stories and writing were very good. Got to the end of book 3 and realized it wasn't the end of the story. Fortunately book 4 was published shortly after. Now the wait has been so long I barely remember the story. Who is Simon? Sure wish the author didn't go into radio silence for the past 4 years. I even wrote to the publishers but never heard back. Glad someone did so we will at least know Jones will write one more. But if it's not the final one I won't buy it until the series is finished. I'm going to have to read all of them again to remember it anyway.

Didn't they say that last year...?

Thanks for your writing, j.v. My wife brought home Vol 2 from the library; we read it and went out and bought vols 1, 3, & 4. I haven't done something like that since Jordan's Wheel of Time series (started with vol 3 or 4, and have re-read the series close to 10 times) and George R R Martin's Game of Thrones (only read once but am watching dvd's of the series.)

Your quality is good enough that i'm more than willing to wait for vol. 5 whenever you can get it to us. Ditto for vol 6 if there is going to be one.

Where/how did you get all the knowledge of the world of ice? Pouring water along the door to both block the wind and make it hard to open ....., exploding trees in the way-below zero cold, the ruggedness of far North lake ice, and more. (i miss the warmth/coziness of igloos tho)

Back when a while, Harry Harrison wrote the Stainless Steel Rat series. I think it was in that series (this is a 15 year old memory)that he started a book something like this: "He piloted his escape craft into the planet's atmosphere, frantically dodging the shots of the space ship chasing him. He set the autopilot and then ejected. As his parachute opened and slowed him, a ricochet hit the chute and his ejection seat tumbled to an awkward landing on the top of a hill. Then, things started to get exciting."

Your characters seem to lead equally exciting lives. And we're enjoying your wordsmithing. Oh -- where did you find such words as "tang" for pillars and a few other obscure old or middle English words.

And also, i like the way you've created Raina as a woman doing womanly things till Vol 4 where she becomes a both a leader AND a shero in her own right, respected and admired by the testosterone- heavy male warriors.

Just finished reading book 1 to 4 back to back. Great read. Very happy to hear the fifth is on the way. I do have one comment for Orbit Publishing though and that is they should get themselves a decent proof reader. Typos all the way through, even naming the wrong character in two places in book 4.

Well I'll wait till final book published, as no trust left with this author. Maybe Sanderson can finish this series as well? ;-)

I don't mind waiting, but this is ridiculous. Still I suppose I can re read the whole lot if they ever publish more!Not holding my breath. P*ssed off!
Iain

Love the series but I'm not getting any younger J.V

Any update at all?

Finished Watcher last night... just read all these comments. Hummph. Its hard work weaving all these story threads into a saturated climax and resolution in 350 pages. I await JV.s ENDLORDS. Hey, if you can't wait imagine your own ending. CA Reader

JVJ has just updated her website saying that work on volume 5 has meant she's not updated her journal in a number of years but she hopes to remedy that soon.

Isn't that the same message that's been up for about two years now?

It's now Feb. 2016. Any words from Orbit UK or Tor US on publishing dates?

Frustrated as i might be, as i have just purchased the fourth book in my exitement, (thinking it was endlords)..

I shall continue to wait and read more novels similar to Watcher of the dead once again.

I'm French, and I wait the new book of J.V Jones. Anyone know when the new book of the serie will be released ? because a translation in French takes time and I am increasingly impatient.

Concerned and soon to be dead reader said...

I think George, Patrick and JV have all sold there souls and are living off the publishers advances. Enough of the carrot guys more stick is needed, lots more.