In his disguise as commander of the Dendarii mercenary fleet, Miles Vorkosigan is dispatched by Barrayaran intelligence to rendezvous with a defector on the anarchic world of Jackson's Whole. However, it isn't long before Miles is up to his neck in political intrigue between three feuding houses, with the defector, a mutant and a werewolf to worry about... 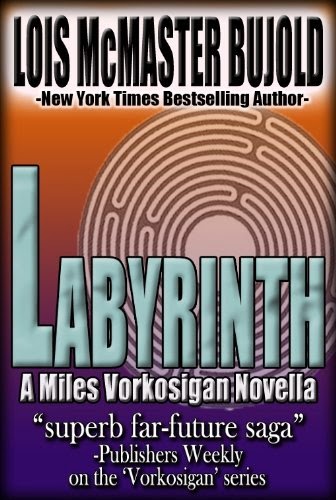 Labyrinth is a short novella featuring Lois McMaster Bujold's signature character of Miles Vorkosigan, once again up to his neck in trouble after a simple mission goes wrong (as they usually do). It's a fun little piece, featuring lots of Miles getting captured, smart-talking his way through interrogations and then escaping whilst throwing an entire world into turmoil but retaining deniability for Barrayar.

Whilst it's good, it's slight. There's some interesting stuff about genetic engineering, not to mention the first appearance in the Miles timeline of the quaddies, people who have had their legs replaced with arms to better cope with life in zero-gee. Between the quaddie, the werewolf (actually a genetically-altered super-soldier), the dwarf (Miles) and the hermaphrodite (recurring character Bel Thorne), the novella can be said to be about people who are outcast from some societies due to unthinking prejudice. Unfortunately, the novella's short length prevents Bujold from exploring any of the issues in any real great depth, especially as the fascinating sociological stuff is put on hold for most of the story as we instead follow Miles trying to break out of a prison.

That said, Labyrinth (***) is a fun read which cracks along fairly smartly and packs a fair amount of character development and action into a short page count. It's just a shame that Bujold didn't flesh the story out into a full novel, as it feels like the characters and issues being explored could have warranted it. Without that exploration, the novella ultimately feels too slight and disposable. The novella is available now in the UK and USA as part of the Miles, Mystery and Mayhem omnibus. Oddly, it is also reprinted in the Miles, Mutants and Microbes omnibus as well.
Posted by Adam Whitehead at 18:29

There's an unfortunate habit of repeating some of the stories in the omnibus, so anyone wanting to collect the omnibus volumes are going to have some repetition.

I'm surprised you didn't mention that "Labyrinth" is also part of the so-called novel Borders of Infinity, where it and 2 other novellas are connected through a frame story.