The world of Umayma is divided between two warring superpowers, Nasheen and Chenja, and a whole host of  neutral nations surrounding them. The nations are divided by religion, each preaching a different version of their holy book split along gender lines. Nyx is a native of Nasheen, a bel dame assassin sent out to do dirty undercover missions too dangerous to entrust to standard law enforcement. When Nyx gets in over her head, she ends up in prison and is eventually released as a free agent, a mercenary for hire. When the Queen of Nasheen gives her a special mission that can set her and her team up for life, Nyx jumps at it...only to find herself trapped behind Chenjan lines unsure of who is the enemy and whom she can trust. 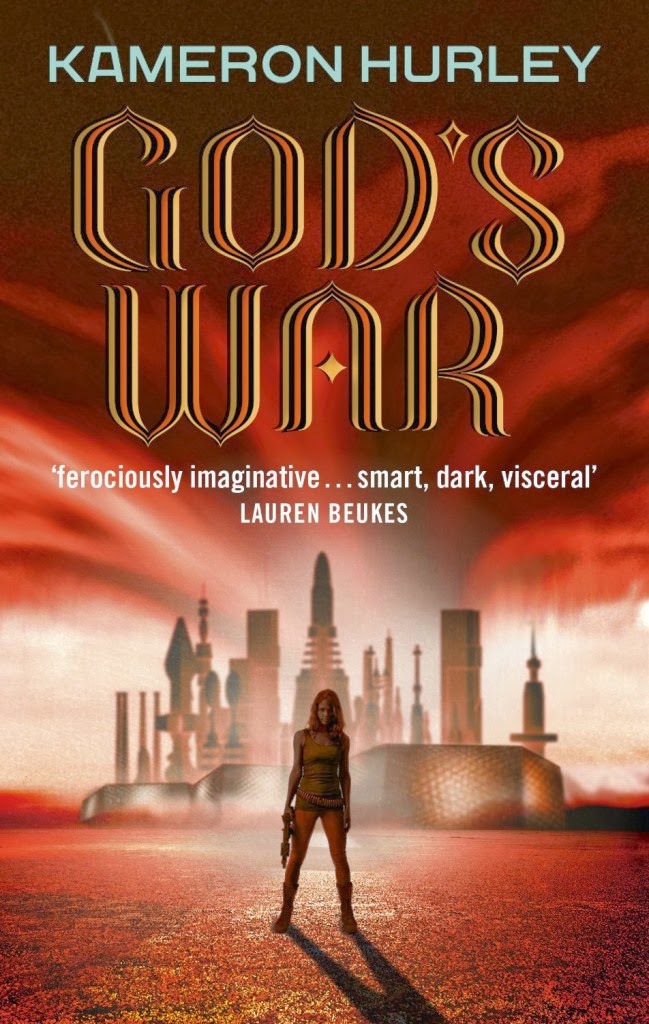 God's War is the opening volume - volley may be a better term - of The Bel Dame Apocrypha. This is an SF take on the New Weird, set on a planet well over 3,000 years in the future where the natives practice different forms of Islam that have evolved from the various present-day versions of the religion, but along very different lines. Nasheen is a matriarchy where women have the power and do everything from ruling to fighting (either on the front or in boxing rings). Chenja is a more conservative and repressive nation where women are kept firmly in the home and not allowed much in the way of freedom.

The New Weird elements creep in the form of technology. For reasons not really explained in this opening volume, the colonists on Umayma does not use traditional power sources. Instead everything from lights to weapons to computer consoles are powered by bugs of varying size and capability. Special types of people, 'magicians', can manipulate these bugs for offensive and defensive purposes, sometimes to devastating effect. Also, there's other people who can transform themselves into animals, somehow. This isn't really explained either, although one revelation suggests it's a form of long-forgotten genetic engineering.

Kameron Hurley is also not an author particularly interested in exposition or infodumping. The novel opens in media res and leaves the reader scrambling to keep up with what the hell is going on. Chapters alternate between Nyx, a bel dame assassin who later turns independent contractor, and Rhys, a Chenjan refugee and magician who reluctantly teams up with Nyx for protection from her racist countrymen (and women), as well as employment. There are occasional chapters from the POV of other members of Nyx's team, but for the most part the novel is a two-hander alternated between these two very different characters and their worldviews. Rhys and Nyx are studies in contrasts, with him being religious, a man of deep conviction and faith, whilst Nyx is all but an atheist with occasional forays into depression and nihilism, whose answer to most problems is violence. Oddly, they complement one another well and most of the setbacks they face come about when they are separated. 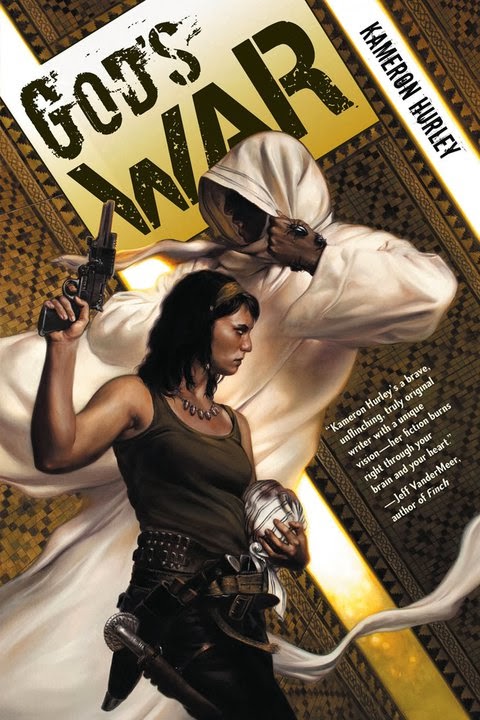 Hurley is balancing a huge number of issues and ideas in this novel: religion, politics, gender issues, war, science and morality all play their parts against the backdrop of a mystery thriller plot. Occasionally the book staggers under the weight of these elements and bogs down. There's a few too many times when our 'heroes' are betrayed, captured and interrogated before escaping/being rescued, like an unusually violent episode of mid-1970s Doctor Who. Hurley's prose is razor-sharp and intelligent, but sometimes bogs down in quieter moments between the action into repetitive character introspection, giving a somewhat stodgy feel to some passages.

But when God's War catches fire, it catches fire like petrol thrown on a bonfire. There's a fearsome mixture of violence, attitude, politics, religion and action at work here, resulting in the most caustic and driven SF debut novel since Altered Carbon. But whilst that novel didn't seem to know quite what to do with its attitude and drive beyond fuel a mildly diverting techno-thriller, Kameron directs her writing skills here in much more productive directions. This is an exhausting, nerve-shredding and vital novel.

God's War (****) is an action-packed, smart book which occasionally stutters in its pacing and is a bit too often just confusing. But it also brims with attitude and verve and represents the arrival of a refreshing new voice in SFF. It is available now in the UK and USA.
Posted by Adam Whitehead at 16:48

I started to bounce off the weird tech in the novel (and still would have liked more detail) when I read it. The other virtues of the novel, though, especially when the ultra-violence rears its head in the action scenes, really pulled me through it.