Dr. Alan Farragut and his team from the Centre for Disease Control are deployed to a remote, high-tech base in the Arctic to investigate the outbreak of a potentially lethal virus. People on the base are dying, others are being driven insane and base commander Dr. Hiroshi Hatake is less than cooperative. As the crisis escalates, it becomes clear that the virus is getting out of the control of those who created it, and they are willing to take drastic steps to ensure the truth never gets out. 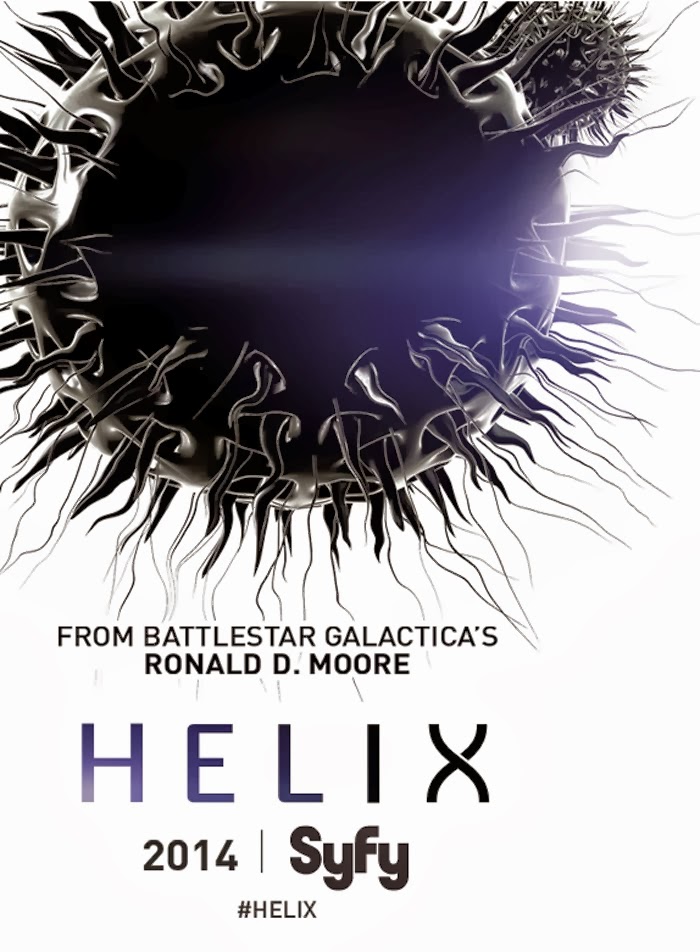 Note: Ronald D. Moore only acted as a creative consultant during the planning of the series and has zero day-to-day involvement in its making, so SyFy were taking liberties with its marketing here.

Helix is a science fiction medical thriller which mixes influences from medical shows, The Thing and zombie thrillers. It's an attempt to create a show in which there is more scientific accuracy (or at least more use of the real scientific method) than in most series and which mixes moments of character introspection with scenes of action and horror. It is also a near-unmitigated failure.

Helix has some of the ingredients needed for success: a charismatic and superbly-played antagonist in Hatake (played with gravitas by the always-splendid Hiroyuki Sanada), some interested backstory mysteries and a plot which makes sense of hitherto implausible coincidences as it goes along. There are also some very good make-up effects for the infected. Also, and by the sixth episode this was pretty much why I was still watching, it has some awesome corridor design. The top-level corridors of the Arctic base in Helix are chunky, futuristic, cool but also practical. It's rather a shame that the series spends so much time down in the bowels of the base which looks like the corridors of an abandoned hospital, but those top-level corridors were great.

On the downside, and this could get long, we have some quite staggeringly badly-paced scripts. Events unfold with all the grace and inertia of a sloth on tranquilisers. Entire episodes go by in which characters seem to do nothing but yell at how they're not getting any answers and then go running around corridors and/or air vents for a bit. The CGI is just plain embarrassing: a few establishing night-time shots of the base are good, but everything else is abysmal (especially scenes where the CG virus strands breaking out of their containers are in the same shot as actors). There is zero sexual tension between Billy Campbell's appallingly wooden lead and Jordan Hayes's character, Sarah (who is better-acted but has almost nothing to do). Kyra Zagorsky's Dr. Walker shows a lot of promise but she spends most of these first six episodes cowering in the corner of an office having hallucinations. Meegwun Fairbrother's character has all the facial expression, charisma and presence of a particularly dull brick. And all to often the writers fall back on a comically badly-used device where jaunty music is played over scenes of dramatic tension, apparently to exploit tonal dissonance, but instead it just looks ridiculous.


Helix's first six episodes (*) are nothing short of appalling. Badly-written, badly-paced, badly-produced and in some cases woefully acted, it is only lifted by Hiroyuki Sanada's performance (and even he starts looking bored after the first few episodes) and by those amazing corridors. The show is airing on SyFy in the United States and now not at all in the UK (Channel 5 dropped it after the sixth episode).
Posted by Adam Whitehead at 09:40

"I will speak slowly in a low gravelly voice and you will think it great acting only in comparison..."

There was a scene - don't remember if it was in the first 6 eps - where one character has a dream about several other characters and I was surprised at how much better Hayes was once the script lets her character have more than one emotion.

And it gets even more soapy in later episodes. Families separated long ago. "No, I am your father." The infected worshiping one of their own and no one seems curious about it. An Achilles heel for the infected is discovered and it is NOT used to capture/contain/(kill?) them. And they probably won't try it again in later episodes even though it worked. Rant off.

I think Helix is moving to Channel 5* later in the year. They definitely stated during the credits of the last episode aired that it would be back.

Was far better than defiance.

I haven't seen Defiance yet, so cannot comment to that :)