Forty years ago the great dragon Feuerschwinge went on a rampage across Germany, destroying vast areas of land. It was finally killed by the Luftwaffe, working in concert with a dragon-slaying scientist named Vauclair. This event, the Dragonfall, was soon overshadowed as other, even greater disasters threatened humanity. 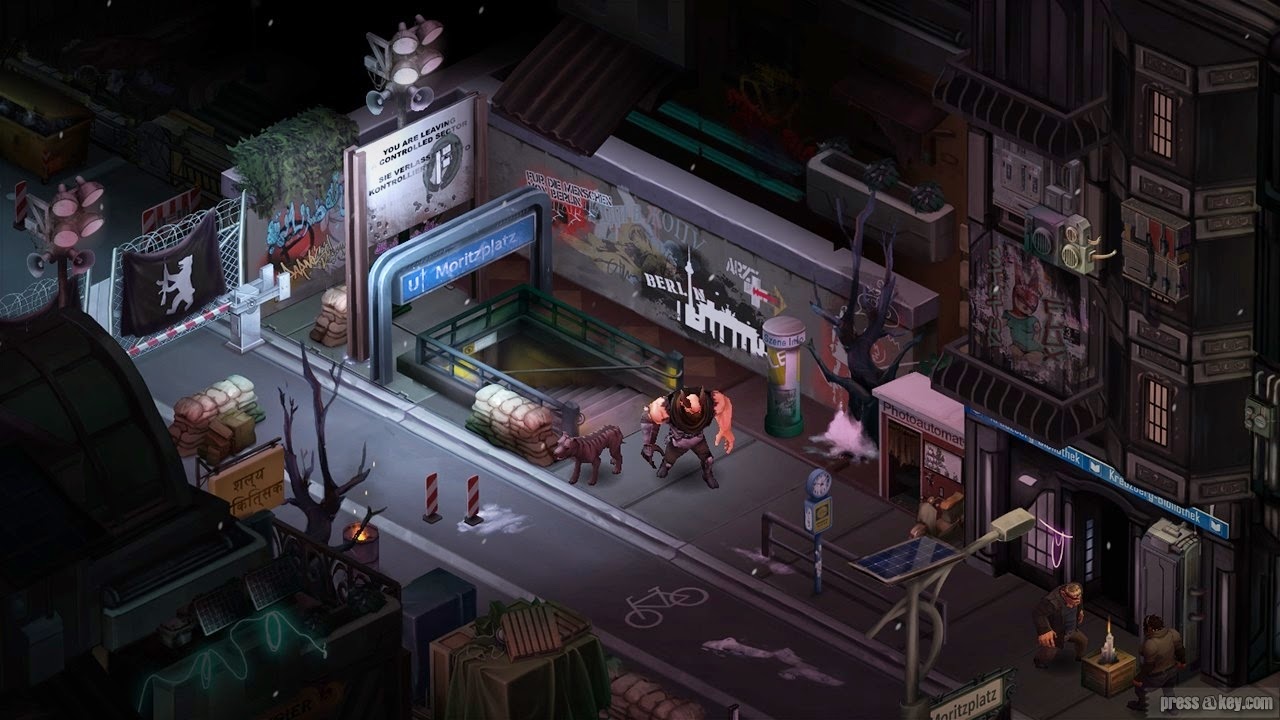 A band of shadowrunners in Berlin uncover evidence that Feuerschwinge is not dead, and may soon return to destroy the Flux-State. They also discover that something is wrong in the Matrix, with deckers dying whilst trying to access information related to the dragon. The shadowrunners may soon hold the fate of Berlin, and possibly the wider world, in their hands.

Dragonfall is the first expansion to last year's Shadowrun Returns. Calling it an expansion is to actually do it a disservice: it is a larger, more satisfying and better-written game than its forebear. It clocks in at between 15 and 20 hours in length (compared to the original's 10) and addresses most of the first game's technical issues as well as its creative ones.

Once again you start off creating a new character from scratch (you can't port over your character from Dead Man's Switch, the original base campaign) and receiving a message from an old friend. This time you team up with an established band of runners trying to carry out a heist at a remote mansion. Needless to say, things go wrong and soon your band of heroes or, more accurately, morally ambiguous protagonists are laying low at their safehouse. After initial resistance, you manage to take command of the band and have to find out what happened at the mansion, who wants you dead and what the hell is going on. Unlike the original game, you have a full band of runners who accompanies you through the game (though you can still recruit more skilled - but expensive - runners for hire if you really want). This immediately leads to much richer characterisation and character interplay, with you able to check in with your team between missions, learn more about them and help them to deal with their own problems.

Early in the game you are floundering in the dark, so have to take on side-missions to raise funds to hire a data expert to work out what's happening. This gives early missions a sense of freeform structure, with you both heading off to other parts of the city on missions and helping out in the deprived neighbourhood where your base is located. The neighbourhood is home to all manner of individuals and taking the time to get to know them early on pays off later, when you can ask them for aid or get additional missions from them. The game is still linear, but it hides its linearity much better than the original campaign, with you able to tackle missions in a variety of different orders. Completing runs gives you karma points which you can use to upgrade your main character's skills. Again, success is not dependent on combat and, indeed, resolving situations without resorting to guns can give you more karma points then wading in and shooting everything in sight (though this also works). Dragonfall is a more confident, assured game than its forebear. The writing is stronger, the dialogue smarter and funnier ("Can you sing?" "I was the frontman for a punk band. No, I cannot sing,") and the characters are much more complex, messier people. The game acknowledges that people who'd rather hang out in grotty bars and risk getting killed for a living are likely to have severe issues, and exploits that to provide some rich (and occasionally disturbing) backgrounds. The game offers up a lot of moral quandaries but these are often even nastier and more difficult to deal with than the previous game's, with plenty of moments when it feels you are trying to make the least-worst choice rather than a 'good' one.

The better writing (and the original was pretty good) accompanies some very wise gameplay improvements from the first game. You can now save anywhere, with both quicksave and regular saving options on top of the autosaves. You can even save mid-combat. This eases frustration in the later, epic-length battle sequences. These improvements are also retrofitted into the original Dead Man's Switch campaign. The game also takes you out of turn-based mode once all the enemies in battle are dead rather than forcing you to laboriously move around locations character-by-character, which gets old quickly. The decking sequences in cyberspace are also more optional than necessary, making tasks easier rather than them being mandatory.

On the weaker side of things, the game is still focused on combat. There's more ways to avoid it than before and more satisfying conversation options, but almost all of your skills are based on their value in combat. Given that the pen-and-paper Shadowrun RPG is based more around small-scale heists, trying to extract information without the enemy ever being aware of your presence and fighting in the shadows, Dragonfall's emphasis on combat and massive explosions over stealth is a bit odd. There's also the fact that, for the second game in a row, you are trying to save the world, which is much higher stakes than normal for the setting. At least this time around the plot ties in with a core part of Shadowrun lore and is set up from the off, rather than Dead Man Switch's abrupt and unconvincing stakes escalation in its closing hour or so.

Dragonfall (****½) is not flawless, but it builds on the impressive foundations of Shadowrun Returns to deliver a well-written, compelling adventure. Much-improved gameplay systems make the game far more rewarding, with some very memorable characters and very satisfying combat. It is available now via Steam.
Posted by Adam Whitehead at 19:39

Wow this looks awesome. Makes me nostalgic for the old SNES and Sega Genesis games (and all my old rulebooks for the pen and paper game, which I never played but loved anyway). Thanks for the write-up.