WORLD OF ICE AND FIRE completed, gets new cover art

George R.R. Martin has reported that the writing part of The World of Ice and Fire has been completed, with the book handed over to the editors for the last artwork to be added. Assuming no problems with the art, GRRM anticipates the book being published in October this year. 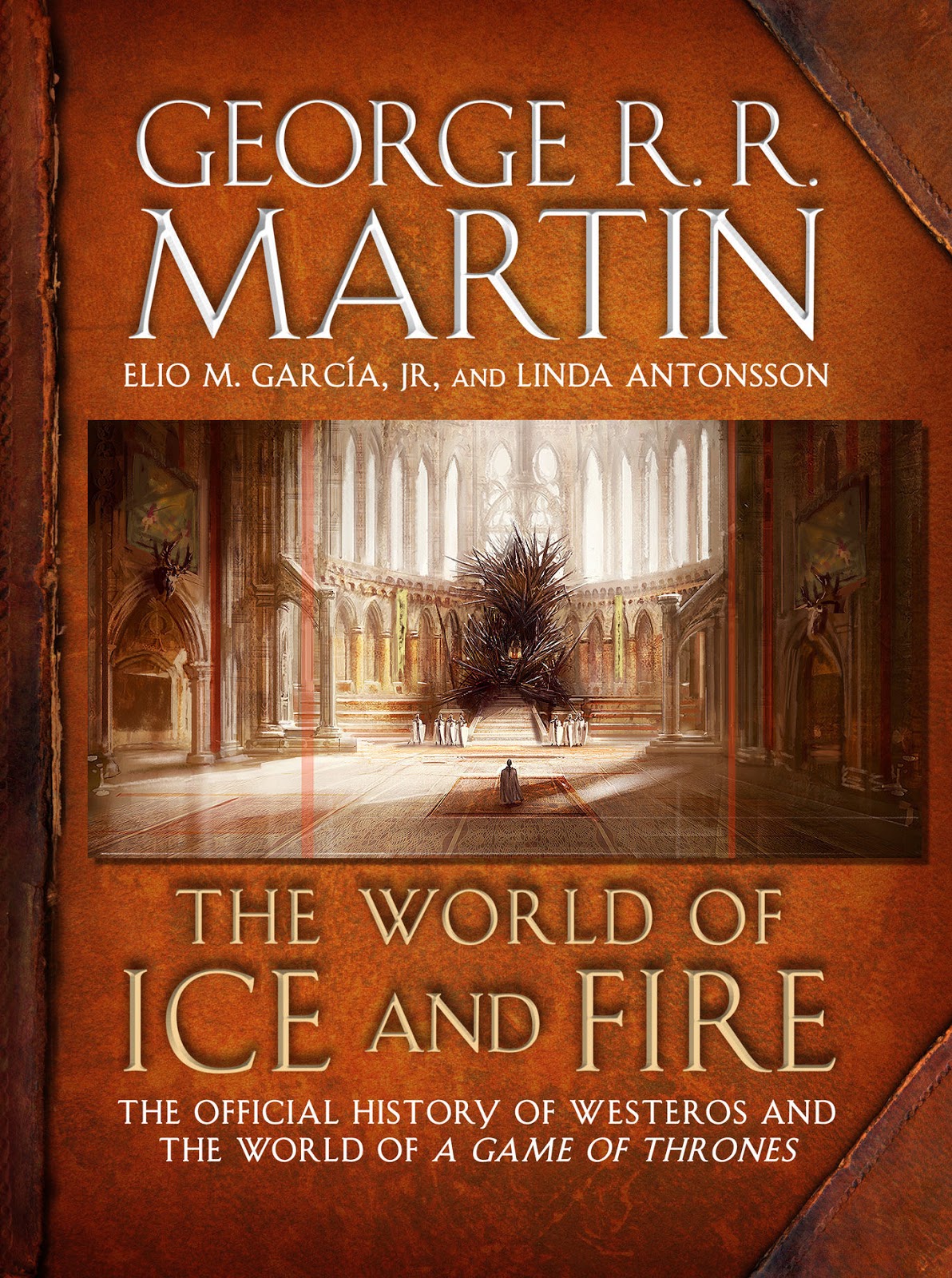 The book will feature a detailed history of Westeros (particularly focusing on the Targaryen era) as well as geographical information. Originally the book did not feature much of Essos and the east, but at popular request the writers have added more detail to those sections.

Expanding on GRRM's information over at Westeros.org, co-author Elio 'Ran' Garcia confirms that the bulk of the work was done last year and most of GRRM's writing time since has been dedicated to The Winds of Winter, returning to finish off a couple of last pieces for the world book before the copy-edit.

The book will be over 150,000 words in length with well over 200 illustrations, the majority new (although Ted Naismith's castle artwork from a calendar a couple of years ago will be reused, as will some material from the card game). The book will probably come in between 300 and 400 large-format pages in length.

Work on The World of Ice and Fire began way back in 2007, so it'll be good to finally see it hit the shelves and hopefully clear up a lot of questions about the world of Westeros and Essos.
Posted by Adam Whitehead at 10:11

So your comment that GRRM was finished with this in the first half of 2013 was, again, a total rubbish statement.

Wert, do you have any news on when they will release the Dunk and Egg omnibus?

As Ran points out, the text was mostly done (from GRRM's end) in the first half of 2013. Then, as the book moved into the final edit, they realised they needed a few more bits and pieces and added them in. Perfectly normal editing procedure.

The Dunk and Egg omnibus is out now in several territories (Germany and I think Brazil), but the UK and USA are not getting it until August 2015. I don't know why there's such a delay.

I'm sorry, Adam, in sounding like a detractor, but why do you insist on making up excuses for George's diabolical work ethic. This tome is already, what, five years late? They wouldn't have needed a few more bits and pieces to add if George hadn't ripped 80,000 words from it just so he could have something in 'Legends,' due to his complete inability to actually finish writing anything these days. Let's look at the evidence: Poul Anderson tribute anthology - gave up; Dunk & Egg - indefinitely postponed; ADwD - six years to come out, and even then it wasn't really finished as the climaxes George intended would've taken another year to write, at least. If you want to be really pedantic, it could be argued that AFfC still isn't finished after 14 years! I would love for George to finish the series - I just don't think he wants to.

Does anyone know if the recent novella 'The Princess and the Queen' is included? I heard there was a longer version to come and figured this would be its likely destination.

'The Princess and the Queen' situation is complicated. It appears that GRRM wrote an 80,000-odd-word version, which of course couldn't fit into the world book (it'd take up more than half its length!). Gardner Dozois edited that down to a 30,000-word version, which is the version that has been published in DANGEROUS WOMEN. Then Ran and Linda have further edited the whole 80,000-word story (including the exercised bits) into a much shorter summary of unknown length, maybe a couple of thousand words, which is what will appear in the world book.

The 'full' 'Princess and the Queen' will appear in the so-called 'GRRMarillion', a book of myths, stories and legends from the history of Westeros, which will only appear once the rest of the series is done.

"Why do you insist on making up excuses for George's diabolical work ethic. This tome is already, what, five years late?"

As has become apparent (though, regrettably, not always to GRRM), it is necessary to frame any bit of GRRM-related news in how it impacts on the writing of ASoIaF. If we didn't do that, the first comment would be someone asking if he was doing that instead of ASoIaF itself. GRRM's work on TWoIaF (and LANDS) clearly did impact on the writing of TWoW in 2011-12, because he said so. What was being made clear (by Ran) was that it wasn't impacting on the current situation with TWoW, for whatever that's worth.

That said, we were told that the world book was going to be held back until after ADWD was published because then it could include information from it. However, the information ADWD gave us could have been included regardless (does it matter if ADWD is out to get a detailed description of say Volantis?) and obviously no spoilery information is going to be included (the world book isn't telling us anything new about Summerhall, Jon's parentage or whether Aegon is a fake or not). So I don't see why they needed to delay it until post-ADWD, aside from the workload issue. Post-TV show it'll probably sell a lot more, but that's a fairly recent development.

Here are a list of side projects and completion dates since Martin declared Dance complete in 2011. 2 things stand out to me:

1. 3 year anniversery of Dance being done coming up next month.

2. The amount of effort to produce these items makes me think a 2015 release is highly unlikely.

The scripts aren't too much of a problem: about 2 weeks each is my understanding for how long they take to write. That's actually a bit slow for episodic television in which 5-7 days per script is more the norm, but HBO doesn't have as tight a turnaround schedule as the networks.

The editing stuff is basically the same as was going on during ADWD, which GRRM swore blind did not impact on the delays to the book. Allegedly he edits in down-time from his writing time. Whether that's true or not I don't know, but that's certainly the claim. There are those who have drawn up elaborate charts of when editing work has been down and how this 'clearly' delayed AFFC and ADWD (although such editing work was much rarer during AFFC and that still took 5 years to come out). Having been through the editorial process myself now on a few works, I think people are majorly overestimating how time-consuming editing work can be, especially when you're dealing with professionals and have help (Dozois on the other stuff, Snodgrass on WILD CARDS).

The world book and LANDS were apparently the major problems and the major causes of delays to TWoW. Whilst it's nice to get those things, I agree that TWoW should have been prioritised, especially in the light of the TV series catching up.

So it's pretty much Ran's fault that TWoW is so late! :)

Thanks for the info Mr. Whitehead.The 'GRRMarillion' will hopefully be worth the wait.