Gearbox have expanded on their plans for re-releasing Homeworld and Homeworld 2 later this year. The developers bought the rights to the Homeworld franchise last year when the previous company to hold them, THQ, went bust. Since then Gearbox have been working alongside the original developers (formerly at Relic, now at Blackbird Entertainment) to bring the games back to life for a new generation of gamers. 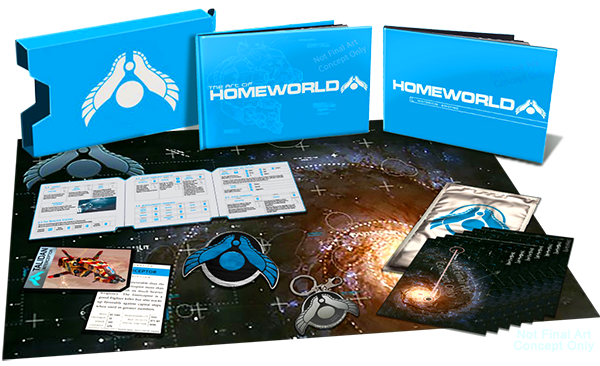 The most exciting part of this plan is the release of a brand new game, Homeworld: Shipbreakers, which will serve as a prequel to the series. That still seems a way off, however, with Gearbox's immediate focus being on re-releasing the original games. This project is now called Homeworld Remastered, as the work they are doing goes beyond a paint-and-touch-up job. There will be expanded game systems, whole new (and far more detailed) models and textures, upgraded audio and completely redone cut scenes by the original artists. However, for those fearing for the purity of the originals, the original, untouched versions will also be included with the Remastered editions, just brought up to compatibility with modern operating systems.

The games will be released digitally, but Gearbox are also planning a limited edition which will include an art book, the original game manuals, keychains and possibly a map of the Whirlpool Galaxy (where the games are set). Fans are being asked for their input on the Gearbox forums (so far, most are also asking for a soundtrack CD). Most notable is a replica of the Mothership from the game, with a 12" model with internal LED lighting being mooted. Generally I am immune to this sort of merchandising appeal, but frankly I'd sell a kidney for one of these.

Originally released by Relic Entertainment and Vivendi in 1999, Homeworld was the very first real-time strategy game to be set in full, 3D space with movement possible on all planes. It depicted the flight of a few tens of thousands of refugees from the destruction of their planet and the discovery that their true homeworld, Hiigara, lies halfway across the galaxy with enemies harrying them all the way. The game was noted for its atmosphere, vivid setting, awesome music and cutting-edge visuals (inspired by the art of SF cover artists Chris Foss and Peter Elson), as well as its sublime gameplay. A stand-alone spin-off game, Homeworld: Cataclysm, was released in 2000, followed by a full sequel, Homeworld 2, in 2003. Unfortunately, the original code and assets for Cataclysm have gone missing over the years, so at the moment only Homeworld and Homeworld 2 are being updated.

Most of the team involved in the creation of the franchise left Relic after 2006 to found a new studio, Blackbird Entertainment. After working on ports and supporting other projects, they began work on Shipbreakers, a new 3D RTS game, in 2010. Last year Gearbox rescued the game rights to the Homeworld series and teamed up with Blackbird to relaunch the franchise. Shipbreakers was retooled as a Homeworld prequel and is hoped for release in 2014 or 2015.
Posted by Adam Whitehead at 10:33

It's remarkable how little graphical grunt you need to make a space game look lovely, and from a fairly recent play, Homeworld still looks nice, even given the limitations of the original texture resolutions.

I'm hoping the remasters wont be quite so difficult though :/

Between Homeworld 2 and Nexus: The Jupiter Incident, I really wanted more games like the later. But, guess I have to be content that there are going to be new fleet combat space games at all these days.

Oooh man, can't wait. The Homeworld opening, and the music, and the narrator, still stick with me to this day.

Luckily I have a boxed version of Cataclysm too, so I'll just have to figure out how to install that!