Square Enix have confirmed that Final Fantasy X and its slightly bizarrely-named sequel, Final Fantasy X-II, will be released on Steam this week in a remastered form. 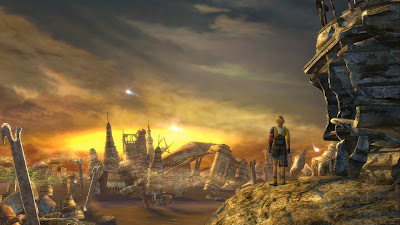 This continues Square's push into the PC game space, having recently released or re-released Final Fantasy III through IX, as well as XIII, XIII-II and Lightning Returns, as well as Type-0 (XI and XIV, being multiplayer-focused games, were already on the platform). The remaster of X was known to be on the cards for a while since Square had announced it was coming to mobile devices, with the PC versions of the games being a result of those remasterings.

Sales for the PC versions of these older RPGs have been apparently very impressive, with each port getting more care and attention than the last one. This bodes well for a good technical port of the two RPGs.

Whether the upcoming Final Fantasy XV and the comprehensive remake of the classic Final Fantasy VII will also be released on PC alongside their PlayStation 4 and X-Box One versions remains to be seen.

Final Fantasy X was originally released in 2001 and was the first game in the series to be released on the PlayStation 2. It was also the first game in the series to have a full 3D world (rather than the hybrid 3D characters/2D backdrops of FF VII through IX) and voice acting. Controversially, it was the first game to remove the overworld map and limit the freedom of the characters to travel where they liked. The main character Tidus also received criticism for awful dialogue. Despite these weaknesses, the game received generally good reviews and sold very well. Final Fantasy X-II, the first direct sequel Square has ever made to a Final Fantasy game (each game is set in its own world and possibly its own universe), was released in 2003 and is a much lighter game, more reliant on humour. For the first time in a Final Fantasy title, the entire main cast is also female, which was seen as a interesting shift away from the balanced or male-dominated casts of the earlier games. X-II was also well-received, particularly its battle system and much more freeform style of gameplay.

This flurry of re-releases leaves only Final Fantasy XII unavailable on PC. It is unknown if this will follow, but on the basis of the other re-releases this appears to be likely.

Final Fantasy X/X-II HD Remaster will be released on Steam on May 12th.
Posted by Adam Whitehead at 15:12