Star Trek at 50: Building the Next Generation

In 1977 Star Trek nearly returned to television screens as Phase II, a series that would star both the original cast and a number of newer, younger characters who would, over a long period of time, take over the reigns of the franchise as a new generation of stars. In the event, the TV series was cancelled in favour of Star Trek: The Motion Picture (1979). Made with the heavy involvement of original Star Trek creator Gene Roddenberry, the film went drastically over-budget and attracted mixed reviews, although its commercial performance was reasonable. Roddenberry's involvement was scaled back and three sequels - The Wrath of Khan (1982), The Search for Spock (1984) and The Voyage Home (1986) - were both critically more successful and more profitable. 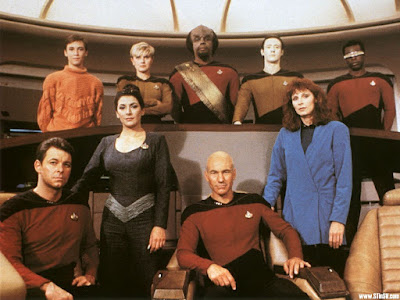 The original cast of Star Trek: The Next Generation.

However, as the movie series continued and became more successful, Paramount had to accept both wage hikes and production agreements to keep the original series stars on board. William Shatner returned for The Voyage Home only after a pay rise and an understanding was reached that he would direct the fifth movie (after his co-star Leonard Nimoy had directed the previous two films). With the actors also ageing and the appeal of visual effects-heavy SF movies featuring characters in their fifties and sixties questionable, the future of the franchise looked less certain.

The decision was made by Paramount to start work on a new Star Trek TV series, with early development work undertaken by writer/producer Greg Strangis. They decided that the new series would feature all-new characters and an all-new Enterprise, and be set considerably further in the future than the original show. Creating an entirely new Star Trek paradigm was considered risky without fan support, and to bring them on board Paramount decided to ask Leonard Nimoy to join in either a consulting role or a more hands-on producing capacity. However, Nimoy was busy with Star Trek IV and didn't want to dive straight from that film's post-production into a gruelling television schedule.

After some debate, Paramount decided to ask Gene Roddenberry to take the helm of the new series. After Roddenberry's handling of Star Trek: The Motion Picture, this raised alarms in some quarters but it was also noted that the first two seasons of the original Star Trek, made with Roddenberry's direct involvement, had been brought in at cost and were generally considered superior to the third season where he took a back seat. Much to their surprise, Roddenberry initially turned them down. He'd felt shut out of the production process on the second through fourth movies and was unhappy with what he felt was a move away from his original, utopian vision. Paramount wooed him back by granting him showrunner status. Paramount's own reservations about using Roddenberry were assuaged when Roddenberry himself requested that a Paramount executive be assigned to him as a co-producer to handle the day-to-day demands of production, freeing Roddenberry up to focus on the writing and casting. Paramount assigned Rick Berman, an up-and-coming producer noted for his strong negotiating skills and his cost-conscious production style, to the new project.

Star Trek: The Next Generation was formally announced on 10 October 1986 as a new, relatively big-budget TV production that would air directly in syndication. It would debut the following September, not giving Roddenberry and Berman much time to get production underway. They decided to assemble a team tapping into some of the talent from the original show, including writers D.C. Fontana and David Gerrold and producers Robert Justman and Eddie Milkis (who would leave towards the end of the first season). Designer Andrew Probert also joined from the film series, along with scenic artist Mike Okuda and production designer Rich Sternbach. Working from Roddenberry's ideas, Gerrold wrote a series bible drawing on inspiration from the original series and some of the follow-ups. 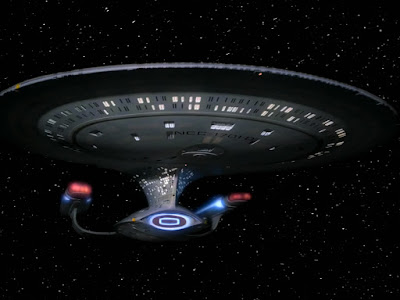 The new series featured a number of ideas that had been developed for Phase II and The Motion Picture. Most notably, this included an empathic counsellor (Counsellor Troi, replacing Lt. Ilia) and a younger, more dynamic first officer who would command away teams (Commander Riker, replacing Commander Decker). Initially Roddenberry didn't want to use the Klingons at all, but was intrigued by one idea raised by Greg Strangis during the initial brainstorming phase. This idea was that Klingons and the Federation had made peace and were now allies. In the glasnost-driven era of the late 1980s, Roddenberry felt this was a fine notion and took it further by assigning a permanent Klingon character to the show, Lt. Worf. Roddenberry also didn't want to repeat himself with a Vulcan crewmember but was delighted by one idea that emerged from the brainstorming sessions: an android who wanted to be human and developed a kind of Pinocchio complex. Roddenberry himself developed the notion of the Federation as having evolved further into a utopian society since Kirk's day, with want and need eliminated and humanity's primary desire now being to evolve and enrich itself with knowledge and equality. Slightly paradoxically, however, he was also inspired by the character of Vasquez in the film Aliens (1986) into including a hot-headed, trigger-happy female security officer (who eventually became Lt. Yar).

The writing of scripts became problematic due to salary issues, with Roddenberry trying to impose less-than-union rates for some of the writers and even script editor D.C. Fontana. Relations between the two deteriorated, with Fontana recording conversations with Roddenberry and Roddenberry bringing his lawyer Leonard Maizlish to meetings. After co-writing the pilot and several draft scripts, Fontana left and Maizlish, despite having no official standing, became de facto script editor. David Gerrold hung around for longer, but after being called "disloyal" several times by Roddenberry also quit at the end of the first season. Writer-producer Maurice Hurley joined partway through Season 1 and his influence was credited with stabilising the chaotic writing room.

Design-wise, things went much more smoothly. In fact, Andrew Probert designed the brand new Enterprise by simply pulling out an unused concept from The Motion Picture which Roddenberry approved almost instantly. The new Enterprise was designed NCC-1701-7, but after "1701-A" was used for the second Enterprise in The Voyage Home this was changed to "1701-G" and then "1701-D", by which time it was also being described as a Galaxy-class starship. The designers came up with the idea for smooth, touch-control surfaces with no obvious buttons, and the control panels reconfiguring themselves for different modes or to the user's preference. They also developed the idea for ultrathin, tablet-like computer devices called PADDs, which designers from Apple would later cite as an influence on their thinking for the iPad.

Casting went somewhat smoothly, with a mixture of new faces (Jonathan Frakes, Marina Sirtis, Denise Crosby, Brent Spiner, Michael Dorn), experienced-but-not-well-known hands (Patrick Stewart, Gates McFadden) and a couple of noted up-and-comers (LeVar Burton and Wil Wheaton). Roddenberry initially opposed the casting of Stewart as Captain Jean-Luc Picard, not wanting to cast a "bald British guy" but with Berman highly in favour of the idea, which he thought would defy expectations. Stewart was called in to test for the Paramount execs in a wig, but was told to lose it for the series. The main cast was announced in May 1987.

The production of the first season of Star Trek: The Next Generation was infamously chaotic, with Roddenberry often rewriting scripts to their detriment and his lawyer Leonard Maizlish meddling in almost every part of production. Patrick Stewart, unused to the rigours and intense schedule of American network television, was initially stuffy and disliked his co-stars' habit of joking around between takes. However, within a few episodes the ice had been broken and the cast began to meld together into a strong team. 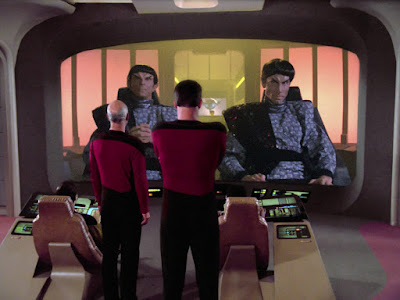 Although the first season was mostly critically derided, late-season episodes such as the finale, The Neutral Zone, which reintroduced the Romulans and hinted at the existence of the Borg, were much better-received.

The chaos began to diminish towards the end of the season as Rick Berman informally made Maurice Hurley a sub-showrunner under his and Roddenberry's overall leadership and reduced Maizlish's involvement in the show. Hurley brought in some longer-form storylines, such as arranging the return of the Romulans and hinting at a much bigger threat lurking on the horizon, which he intended to be an insectoid species with highly advanced technology and a hive mind. This strengthened the writing direction of the series and led to the noted improvement in quality at the end of the first season. However, it also caused controversy amongst the cast when Hurley decided that Gates McFadden's character, Dr. Beverly Crusher, was too passive a character and moved to remove her at the end of the first season. This decision did not sit well with the rest of the cast, particularly Stewart. This also came after the resignation of Denise Crosby as Lt. Yar, who became the first regular Star Trek character in history to be killed off (in the episode Skin of Evil). Crosby later came to regret this decision.

Despite the chaos behind the scenes, Star Trek: The Next Generation debuted in first-run syndication in the United States on 28 September 1987. It's first-run ratings were 15.7 million. When all re-runs were included, this increased to 27 million, making the show a colossal success. First-run ratings fell to about 8 million, but then returned to around 10-11 million by the end of the season. Because of the syndication model, Paramount recorded a 40% rate of return over the course of the first season, despite the show's very high (for the time) budget of $1.3 million per episode. This made renewal an easy decision.

Critically, the first season was mostly panned, although late-season episodes such as Heart of Glory (which focused on Klingons) and The Neutral Zone (the season finale, reintroducing the Romulans) were much more warmly received. Also, although many episodes were torn apart critically (most notably Justice and Code of Honour), the show received generally positive reviews for its design work and casting.

With a second season confirmed, Star Trek: The Next Generation was established as a hit series and everything was set for the show to go on to bigger and better things.

And then every scriptwriter in Hollywood went on strike.
Posted by Adam Whitehead at 18:43

Is it correct that Edward J. Olmos was offered the role of Picard?