The Great Ordeal marches onwards under the leadership of its Aspect-Emperor, Anasurimbor Kellhus. Hundreds of thousands of soldiers, drawn from all corners of the Three Seas, and hundreds of sorcerers haven been assembled in the greatest army to march for thousands of years. Its goal: to cross the vast, sranc-infested northern plains and reach fell Golgotterath, the resting place of the Ark of the Heavens. There the Ordeal will destroy the dreaded, unholy Consult and prevent the second coming of the No-God and the onset of the Second Apocalypse.

As the Ordeal marches, the New Empire Kellhus established to build it teeters on the brink of ruin. The fanatical Fanim have besieged the imperial capital at Momemn, but Empress Esmenet is distracted by the plight of her disturbed children. Sorweel, the Believer-King of Sakarpus, has been sent with Kellhus's daughter Serwa to establish an alliance with Ishterebinth, the last extant stronghold of the mighty Nonmen, but he is unprepared for what awaits him there. And in the Mountains of Demua, the wizard Drusus Achamian and Esmenet's daughter Mimara have located Ishual, the stronghold of the Dunyain and the birthplace of Kellhus. There Achamian hopes to find the information he needs to expose Kellhus as a fraud and determine whether he leads humanity to salvation or damnation. 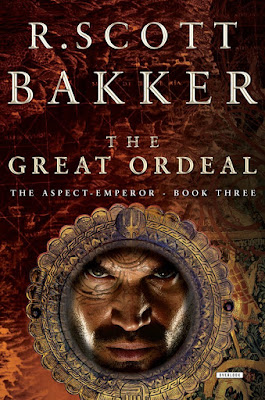 The Great Ordeal is the third and penultimate volume of The Aspect-Emperor, itself the second of three great movements in a larger, over-arching series called The Second Apocalypse. If you are invested already in this series, then this is the easiest review in history: The Great Ordeal is a stunning addition to the series, go and buy it as soon as it is available. For those who remain unconvinced, it's rather unlikely this book will do anything to change your minds.

The Great Ordeal is ultimately a novel of change and revelation. The Great Ordeal and its participants have been tested before, but never as they are in this book. Dark horrors - psychological and physical - await the characters as fresh revelations about the Dunyain, the Nonmen, the Hundred Gods, the Judging Eye, the Logos, the nature of the No-God and Kellhus's own designs are made. Characters grapple with decisions: in the dark shadow of the looming confrontation with Golgotterath there seems to be little hope of salvation, only survival, and a path of least harm may be the best that can be hoped for. It is a dark novel where characters struggle against the fact that some of them are only chess pieces in a grander design set by the gods, the Consult or the Aspect-Emperor, but some of them also discover new ways of gaining agency and thwarting the grand designs that seek to enslave them.

As with previous Bakker novels, the novel mixes political intrigue with religious musings with philosophical insights with scenes of horror and warfare, the author moving smoothly between such elements with a skill and ease of prose that grows more enviable with each volume. There is also a formidable display of imagination, with new worldbuilding concepts and ideas being introduced into the narrative with assured confidence and ease. Characterisation is, as usual, very strong and Bakker seems to tacitly acknowledge the criticisms he has had in the past with a very limited roster of female characters by increasing the amount of screentime for Serwa, Kellhus's daughter and the most intriguing of the new generation of characters. Mimara's importance also increases dramatically in this volume, as it begins to appear that her Judging Eye may hold the ultimate answer to the questions so many characters hold about the Consult and Kellhus himself. The metaphysics of Earwa which seem to hold - on this world anyway - women as an inferior sex are also better explained and shown to be the fault of men and religious dogma (rather than some kind of deep-seated authorial problem) more explicitly than before.

The book is deeply concerned with such metaphysics and Bakker is forced to engage with longer musings on the nature of reality, damnation and salvation. These ideas are key to the storyline and plot of the novel, but are also complex and could risk slowing down the pace of the novel. However, Bakker keeps things moving briskly and (mostly) avoids getting bogged down in philosophy at the expense of the main narrative drive.

The Great Ordeal was originally the first half of a much longer book that had to be split for publication. The risk here was that it may only feel like half a novel, but this is not the case at all. Events are set in motion at the start of the book which culminate in the caverns of Ishterebinth, in the forests of Kuniuri, on the streets of Momemn and, most spectacularly, on the summit of Dagliash. This multi-stranded finale is epic and breathtaking, among the greatest convergences in modern epic fantasy, and the notion it was originally supposed to be a mid-novel climax makes you wonder what exactly Bakker is holding back for the second half. The problem with this climax is that only a couple of strands are firmly resolved, with the rest ending on a series of absolutely titanic cliffhangers (as in, Dance with Dragons levels of cliffhangers or greater).

For those who find Bakker's vision too bleak, his world too grim and his imagination too strewn with horror, The Great Ordeal will do little to reassure them. Occasionally the darkness gets a little too oppressive and the deployment of (mostly implied and off-screen) sexual violence (mostly by men against other men) risks feeling rote, but it does start to feel like there is a method in the madness of Earwa, and the first inklings that some may harbour ambitions to deliver the world not just from the Consult but from the actual darkness it is trapped in beyond that. Whether that is a deliverance to a better existence or something even more appalling remains to be seen.

The Great Ordeal (****½) fairly seethes with intelligence, action and revelation and is a worthwhile continuation of the smartest epic fantasy of our generation. It is also grim and challenging in a manner that won't do much to resolve Bakker's reputation as the most divisive author in modern fantasy. The novel will be published on 5 July 2016 in the United States and on 29 September 2016 in the United Kingdom. The Aspect-Emperor series will conclude with The Unholy Consult, which is already complete and will be published in early-to-mid 2017.
Posted by Adam Whitehead at 14:12

Email ThisBlogThis!Share to TwitterShare to FacebookShare to Pinterest
Labels: r. scott bakker, the aspect-emperor, the great ordeal, the unholy consult

Cannot wait. Cannot fucking wait. Wait, I can fucking not.

Lend me your copy?

Nice one. Looking forward to it!

I'm in the 4th week of my reread, started TWLW today.