In 1991 Brandon Tartikoff - a legendary television executive who'd turned around the declining fortunes of NBC in the 1980s - moved to work at Paramount. One of the first things he did was summon Star Trek: The Next Generation executive producer and showrunner Rick Berman into his office. Berman braced himself for possible bad news, but Tartikoff instead told him he was impressed with the performance of TNG and wanted to know what they were doing to build on that success. In particular, with TNG in its fourth season, the show would be ending in a few years and something was needed to take the franchise forward. 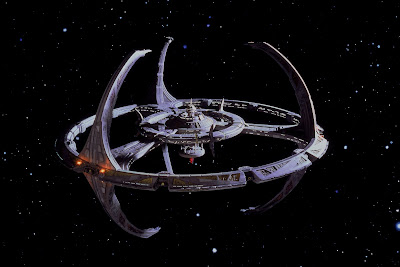 Deep Space Nine was built by the Cardassians and meant to be a more dangerous, more alien and less perfect location for stories than a cutting-edge Federation starship.


Rick Berman was immediately stumped for ideas. The Next Generation was about the starship Enterprise exploring final frontiers and seeking out new worlds and civilisations. Wasn't that what Star Trek was? But Tartikoff suggested using the vast universe that the original series and TNG had established to tell a new kind of story, in the same way that in the 1950s Westerns had told different kinds of narratives in the same setting. In particular, if Star Trek was "Wagon Train to the Stars", as Gene Roddenberry had described it, than the new show could be "The Rifleman in Space". The Rifleman had told the story of a man and his son living in a frontier town and had developed storylines on the basis of staying where you were and making a life in one place rather than constantly travelling.

Berman sat down with TNG producer/writer Michael Piller and started brainstorming ideas, but they kept returning to Tartikoff's idea because it was the one that made the most sense. If one setting for a Star Trek story was a starship, than clearly the two obvious alternatives were a space station or a colony planet. The colony idea was briefly developed, but they realised that the amount of location filming required per episode would be ruinous and would also limit the number of stories that could be told. Setting the new Star Trek series on a space station was therefore the only real alternative. Rather than come up with completely new concepts, the producers looked at the races, concepts and ideas developed on The Next Generation for inspiration. The Ferengi, who had originally been developed as antagonists on TNG, had become too comical and two-dimensional to fulfil that role and had been supplanted by the Borg. However, Berman and Piller saw an opportunity to rehabilitate the Ferengi and use them as commentary on the benefits and disadvantages of capitalism, as compared to the moneyless society of the Federation depicted on TNG. They also wanted the new show to stand apart from the original series and decided against using any of the long-established races like the Klingons, Romulans or Vulcans. Instead, the Cardassians were chosen as the primary antagonists. The Cardassians had been developed in the fourth season TNG episode The Wounded and were shown to be a proud, patriotic race who filled a niche between the honour-bound Klingons and the deceptive Romulans. The producers were also intrigued by the Trill, a race of symbionts developed for the fourth season TNG episode The Host. The idea of a symbiont living for centuries and transferring memories and personalities from humanoid host to humanoid host seemed a rich source of stories and drama. In the wake of the success of Terminator 2: Judgement Day and its shapeshifting antagonist, the producers were also keen to use the same technology to include a shapeshifting character. Star Trek had employed shapeshifters in the past but they had always been let down by the technology.

Berman and Piller were also inspired by contemporary events. The collapse of the Soviet Union and the outbreak of war in the Balkans, with the United Nations helpless to intervene in a partially religiously-motivated conflict, inspired them to place the space station in orbit around a planet which had recently broke free from the control of a larger empire and now faced a rough path to freedom and self-determination. It was decided to make the Cardassians the former empire in charge of the planet and the builders of the space station. This would fulfil something that Piller was keen on, on a move away from the shiny, almost flawless technology of the Federation towards something that was a little rougher around the edges and more alien. The decision to focus on the Cardassians also allowed the producers to do something they'd wanted for a while. They'd been tremendously impressed with the performance of Colm Meaney as Chief O'Brien on TNG, even developing a backstory for him (as a veteran of the long war against Cardassia) and allowing him to get married, but had struggled to find ways to get him involved in the stories enough to justify promoting him to a regular castmember. They decided to transfer him to the new station as its chief engineer. Despite the risks of leaving a successful show to join a brand new one, Meaney jumped at the chance to work more regularly and have a starring role in a series. 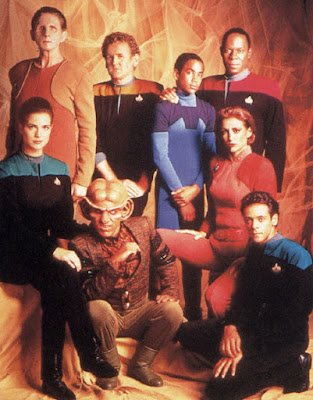 The cast of Star Trek: Deep Space Nine in its first season. The decision to include non-Starfleet, alien characters was meant to help generate conflict and drama without breaking Gene Roddenberry's rules about 24th Century humans being free of the failings of the past.

The series began to come together, but the lead time was enough for the writers to use the fifth season of TNG to start seeding ideas for the new series. Bajor, the planet the new station orbited, was introduced in the episode Ensign Ro. This also introduced the character of Ensign Ro Laren, who would go on to become a recurring character in the fifth and sixth seasons of TNG. The producers were blown away by the performance of Michelle Forbes and offered her a starring role on the new series, but she turned them down in favour of pursuing guest roles on other shows.

Deep Space Nine was formally announced in late 1991. The original title was in fact Deep Space IX, but after several magazines misspelled this as "Deep Space Ix" the producers decided to spell out the number. The announcement of DS9 came just weeks after Warner Brothers had announced its own space station-set TV show, Babylon 5, and this led to brief controversy as that show's creator, J. Michael Straczynski had proposed the series to Paramount in 1989 and wondered if they were copying the idea. However, Straczynski later backed off on this, as he was aware of the professional reputations of Tartikoff, Berman and Piller and also that a space station setting was a very obvious one for an SF show, especially if you are deliberately avoiding a spaceship setting. 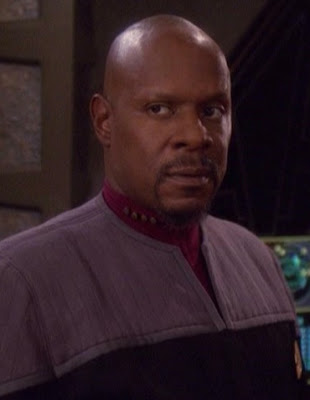 Avery Brooks became the first African-American actor to headline an American drama series in twenty-five years when he was cast as Commander Ben Sisko on Star Trek: Deep Space Nine.

Casting continued and the producers began a gruelling auditioning process for the new commanding officer of the station, Benjamin Sisko. More than one hundred actors were considered before the producers chose Avery Brooks, best known for his supporting role as Hawk on Spenser: For Hire. According to the producers, the fact that Brooks was African-American was not a major reason for casting him but they were nevertheles gratified that it was Star Trek that became the first TV show since The Mod Squad in 1968 to cast a black actor in a leading role in a drama, rather than a supporting one. Keeping up with Tartikoff's original idea of a man and his son living on the frontier, the producers also decided to give Sisko a son, Jake, and cast Cirroc Lofton to play him. Brooks was keen to ensure that Sisko's relationship with Jake was shown to be responsible and strong (despite natural occasional conflicts) as he felt that too many TV shows depicted the lives of African American men and their fathers as dysfunctional or rooted in crime.

The writers and producers also had to confront a problem that had stymied them on TNG. As per Gene Roddenberry's direction, the characters on TNG were pure and free of conflict. This occasionally made finding dramatic stories extremely difficult. For DS9, the writers decided to have a mix of Starfleet, civilian and non-Federation characters which could allow conflict to be generated without breaking Roddenberry's rule of no conflict between the human characters. The producers were extremely happy with the conflict that was generated between Sisko and his first officer, Bajoran Major Kira Nerys (Nana Visitor), a former freedom fighter/terrorist who is now in a responsible military position. This conflict was rooted in cultural issues and radically different mindsets but later developed into real mutual respect.

In the summer of 1992 production began of the show's two-hour pilot, Emissary. One of TNG's most acclaimed directors, David Carson, was called in to helm the pilot and Paramount gave the production a budget of $12 million just for the first episode, a jaw-dropping amount that set a record that was not beaten until Lost spent $14 million on its pilot twelve years later. Paramount also greenlit the entire first season of twenty episodes before a single frame of footage was shot, a stunning display of confidence in the Star Trek brand.

Now the producers just had to deliver.
Posted by Adam Whitehead at 13:19

The fact that the record for most expensive pilot wasn't beaten for TWELVE YEARS shows how crazy having a pilot be that expensive at the time was. They really went all out on getting DS9 going.

In fact, if the inflation calculator at http://inflationdata.com/Inflation/Inflation_Calculators/Inflation_Rate_Calculator.asp can be trusted (the first one to come up with a quick google search) then 12 million in 1992 would easily beat the Lost pilot when adjusted for inflation...

It strikes me that there remain a lot of fans who reject Deep Space Nine because it explored Star Trek canon rather than create its own (until, of course, the Dominion arc expanded, which a lot of these fans may not even know about). It's easier to appear remaining eternally fresh, like Doctor Who, when the main character is recast every few years, even though the storytelling remains essentially the same. What fans complain about can be some of the most interesting stuff to follow...