Star Trek at 50: The Best of All Worlds

Star Trek: The Next Generation entered its second season in 1988 as a proven success, with massive ratings and generating significant profit for Paramount. However, it had suffered a critical drubbing for most of its first season and behind the scenes the production of the series was a chaotic mess. The long-term future of the series was in doubt, and then every scriptwriter in Hollywood went on strike for six months. 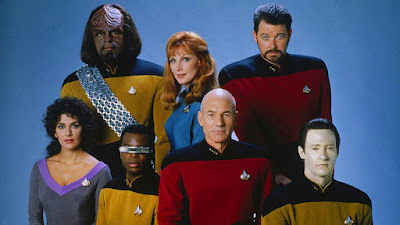 The results were not great. Episodes for the second season had to go into production with only their first, early draft scripts completed (no rewrites allowed under the terms of the strike). One eleven-year-old script from the abandoned Phase II project had to be quickly recycled to serve as the season opener. Producer-writer Maurice Hurley had prepared an elaborate, multi-episode arc continuing from the end of Season 1 showing the Federation and Romulans collaborating to find the race responsible for the attacks in the Neutral Zone, which would have resulted in the unveiling of a new, terrifying insectoid race with a hive mind and superior technology, but this had to be jettisoned in favour of stand-alones.

Somehow, the second season ended up being okay and a much-needed improvement over the first, with several all-time classic episodes. The Measure of a Man was a brilliant morality tale of the kind Star Trek had traditionally excelled at making. Matters of Honour put Riker on board a Klingon Bird of Prey and gave us our first look at a Star Trek story from the POV of the supposed bad guys. But the season will forever be remembered for Q Who?, the episode that introduced the Borg. The original plan for a race of hive-minded insects proved too expensive to realise on screen, so Hurley replaced them with a race of cybernetically-enhanced humanoids, obsessed with absorbing technology from other races. The script also called for the Borg not to be defeated at the end of the episode, with the Enterprise only barely escaping from the Borg threat after Picard begged Q to save them. Patrick Stewart was not keen on this ending but later admitted he was wrong, with the episode winning immense critical acclaim.

However, Hurley had become frustrated at dealing with Gene Roddenberry, in particular when Roddenberry would break his own rules about "perfect" characters that other writers would get chewed out for. In addition, Patrick Stewart had become increasingly aware of the power he held as the star of the show and was volubly campaigning for Gates McFadden (fired at Hurley's direction) to return. These were power struggles that Hurley was increasingly unwilling to fight, so quit at the end of the second season. He did suggest his replacement, however: a young and talented writer named Michael Piller.

When Piller came on board at the start of the third season, he found a show that was still in chaos. With Hurley gone, Rick Berman had acquiesced to Patrick Stewart's demands and Gates McFadden had come back onto the show. But a large swathe of writers had departed and Piller now had to rebuild his writing team from scratch. He assembled a mixture of more experienced hands like Ira Steven Behr and fresh-faced youngsters like Ronald D. Moore and also laid down a series of rules. One of his most far-reaching and successful was the idea that the show was about the regular characters, not the guest stars. The weekly guest stars were there to flesh out stories about the regular, not vice versa. This idea helped strengthen the scripts. Piller was also able to take advantage of Roddenberry's declining involvement in the show to push through scripts based more around conflict and drama. 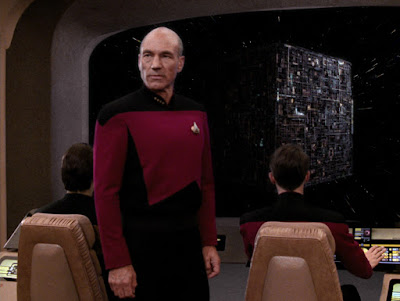 Piller proved to be an able showrunner and provided tremendous stability and direction, even in the most chaotic of conditions. The most heavily-rewritten and expensive script of the season, which people were writing off as a confusing mess at the script stage, became Yesterday's Enterprise, which met with blanket critical praise. Ron Moore was allowed bring Star Trek to the Klingon homeworld for the very first time in Sins of the Father and broke a cardinal rule of Trek by leaving the story unresolved at the end. The story of Lt. Worf and his struggles with his Klingon heritage would span not just the rest of The Next Generation but expand into the spin-off series as well. Numerous other classics dot the season, but it was the finale that completely transformed the fortunes of the franchise. The Best of Both Worlds saw the Borg return in full force, cutting a swathe of destruction across Federation space before, in a cliffhanger ending, kidnapping Captain Picard and transforming him into one of them.

The episode electrified audiences, with both fans and casual viewers eagerly debating what was going to happen next. Patrick Stewart was taken aback to be in his car and have people yelling "Locutus!" at him from neighbouring vehicles. The fourth season opened with a strong run of episodes even after the cliffhanger was resolved, and the show never looked back. Shortly after this the Cardassians were introduced, and a compelling, multi-episode storyline unfolded over the entire season which eventually ended with the Klingon Empire being plunged into civil war by the machinations of the Romulans. The show overtook the episode count of the original Star Trek and, at the start of the fifth season (around the time Gene Roddenberry sadly passed away), passed 100 episodes. More great episodes followed, the producers started talking about spin-offs and a movie and, most impressively, other science fiction shows started appearing on TV. These started with "soft" SF series which had minor SF elements wedded to more standard forms of storytelling, such as with Quantum Leap and The X-Files, but by the end of Trek's run other space operas had started appearing, such as the short-lived Space Rangers and the much more successful Babylon 5.

Star Trek: The Next Generation concluded in early 1994 after seven seasons and 178 episodes. The show had surpassed the original series in popularity and critical acclaim and the cast and crew were keen to take the show to the next level: by following the original crew onto the big screen.
Posted by Adam Whitehead at 20:39

I just wanted to say I'm enjoying the heck out of these Star Trek posts (and I'm not even that much of a Trekkie!).