Star Trek at 50: The Next Generation on Screen


In 1992 Rick Berman summoned scriptwriters Brannon Braga and Ronald D. Moore, along with executive producer Michael Piller and retired TNG writer Maurice Hurley, to a series of meetings. Initially Braga and Moore thought that TNG was about to be cancelled, so were surprised to be offered the chance to write a Star Trek movie. The directive from Paramount was that the film would see the final appearance of the original series crewmembers and see the transition of the TNG crew to the big screen. Hurley and Piller were also invited to write scripts, but Piller turned down the opportunity because he thought it was calling for too much competition between colleagues. In the event, Hurley's script took too long to write and Paramount instead put Braga and Moore's script into pre-production.

The moment fans had been waiting for.


Paramount handing over control of its biggest and longest-running movie franchise to a bunch of TV writers was remarkable, but it was also a display of confidence in the (mostly) young and inexperienced team who had turned The Next Generation into one of the biggest and most successful TV shows in the world. However, it nearly ended up misfiring. Braga and Moore were among the more prolific writers on the series with multiple scripts to write for the final two seasons, including the two-hour TNG finale, All Good Things. Agreeing to write the seventh movie on top of that proved to be a stretch too far, and the writers later admitted they had spread themselves too thin. Leonard Nimoy had also been approached to direct and appear as Spock, but Nimoy voiced concerns over the script and also about the limited nature of his role. In particular, he pointed out his lines could be given to another character with barely any alteration. Ironically, when he passed, that's exactly what happened when his material was instead split between the characters of Scotty and Chekov. British director David Carson was called on to direct, having hugely impressed Paramount with his TNG episode Yesterday's Enterprise and the pilot episode for Deep Space Nine.

The script was a busy one, using Guinan (played by major Star Trek fan Whoopi Goldberg) and a mysterious energy ribbon known as the Nexus to bridge the two time periods, along with the sole live-action depiction of the Enterprise-B, introducing all of the TNG characters to a more casual cinema audience and killing Kirk. The idea of killing Kirk came up in story development meetings where it was felt that the script lacked a big enough climax. Destroying the Enterprise-D was also a surprising move, but one the producers felt was emotionally correct (putting a capstone on the TNG TV show era) as well as having practical value, freeing up studio space until the next film was produced. To help publicise the film, Paramount decided to make use of the nascent Internet and created one of the first-ever websites designed to publicise a specific feature film (the website for the film StarGate went live almost simultaneously, leading to occasional disputes over which film achieved the distinction first).

Star Trek: Generations was released on 18 November 1994 to fairly indifferent reviews. However, some impressive visual effects, a decent couple of trailers, the mass crossover appeal of The Next Generation and rumours of Kirk's death ensured a strong turn-out. Generations was made on a budget of $33 million, the same as Star Trek V, but at just under $120 million made twice as much at the box office. It was a huge success for Paramount, who greenlit an eighth movie in February 1995.

Rick Berman re-hired Moore and Braga to write the script, taking time away from their new day jobs (Moore was working on Star Trek: Deep Space Nine whilst Braga had transferred to the new, second TNG spin-off, Star Trek: Voyager). Brainstorming ideas and aware they would have a larger budget to play with, they decided to combine two notions that had come up early: time travel and the Borg. The Borg had been lightly used on TNG following their defeat in The Best of Both Worlds, with the fear that over-using them would rob them of their unstoppable power. Moore believed that they would make for a fine enemy for a movie. A film would also allow the Borg to be depicted as more powerful and threatening. Their previous appearances had been cut down due to budget issues, with the iconic Battle of Wolf 359 in The Best of Both Worlds happening off-screen. Braga's notion was to have the time travel involving Earth's first contact with the Vulcans, an iconic moment in the history of Star Trek which led to the founding of the Federation. This would also allow the film to help celebrate the 30th anniversary of the franchise. 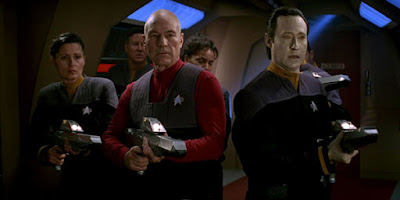 Jonathan Frakes, who had played Commander Riker on The Next Generation, was selected to direct the film. Frakes had directed multiple episodes of TNG, DS9 and Voyager and had won plaudits for his visual style as well as his professional attitude. Frakes won the role after several other directors were rejected for their lack of familiarity with the franchise. Patrick Stewart exercised his considerable influence on the production to give Picard a more action-heavy role in fighting the Borg on the new Enterprise-E.

The movie was originally entitled Star Trek: Resurrection (a title everyone seemed to like), but this was changed to First Contact when 20th Century Fox announced that the fourth Alien movie would have the same title.

Star Trek: First Contact was released on 22 November 1996. The movie grossed $146 million worldwide, an all-time franchise high (not beaten until thirteen years later and the J.J. Abrams movie), against a budget of $45 million (quite modest even by 1996 standards). The critical reception was mostly positive, despite some criticisms of the Earthbound storyline being lacking compared to the space-borne battle between the Borg and the Enterprise crew. One common thread amongst reviews was that First Contact was the first Star Trek movie in a long time that felt like a big event, something more than just a TV episode dragged out to two hours in length.

The ninth Star Trek movie was greenlit a few months later. Paramount were keen to revisit the success of Star Trek IV: The Voyage Home, which had been a massive box office success as a more light-hearted, even comedic film built around a central strong SF idea. With Moore and Braga firmly committed to their respective TV series, Rick Berman called upon former TNG executive producer Michael Piller to write the screenplay. Patrick Stewart, who had a managed to get a production credit on the new film, also suggested ideas. He was particularly keen to build on the idea of Picard as an unconventional, older action hero established in First Contact. For the new movie Picard was cast as a moral rebel, who rejects an alliance of convenience between the Federation and the brutal Son'a to protect an exploited, less powerful race. In later drafts Piller ran into some problems finding the through-line of the story, but Ira Steven Behr, the showrunner of DS9, reviewed the script and helped Piller resolve several issues with it. Paramount showered the script with praise, to Piller's unexpected pleasure, and Patrick Stewart also approved of it. 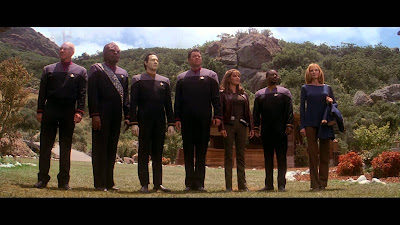 Star Trek: Insurrection was criticised for a lack of ambition.

Jonathan Frakes agreed to return to direct, with Paramount impressed by his work on First Contact. The production team floundered for some time to find a title before settling on Insurrection.

The film was released on 11 December 1998, somewhat bafflingly marketed as the first "Star Trek date movie" for its focus on humour and romance. The film received mixed reviews, which surprised the studio after what they believed was a very strong script. Most of the reviews felt that the producers had made a mistake by moving away from what had worked in First Contact and instead making a glorified TV episode, and not a good one either. Many reviews criticised this lack of ambition (especially after the darker, more action-oriented and even horror-influenced First Contact), although the film certainly was not slated to the same level as The Final Frontier. Much to Paramount's relief, the critical indifference was not reflected in the box office. Against a budget of $58 million, the film took home $112 million worldwide, enough to be judged a reasonable success.

The 1990s were drawing to a close, and with it, Star Trek's golden age. The financial success of the four movies released in the decade was indisputable, but there remained the feeling that Star Trek's true home was on television. When The Next Generation began winding down back at the start of the decade, it was decided that the Trek universe was a big enough place for many different kinds of story...even one where the crew explored the final frontier by standing still.
Posted by Adam Whitehead at 21:49