The Galactic Republic and the Confederacy of Independent Systems are at war. From one end of the galaxy to another, vast armies of clones (fighting for the Republic) and battle droids (fighting for the Confederacy) fight for control of key systems. The Jedi Knights play an important role in the war, moving from flashpoint to flashpoint as they try to bring about the enemy's defeat...unaware that they are being manipulated from behind the scenes by the Sith. 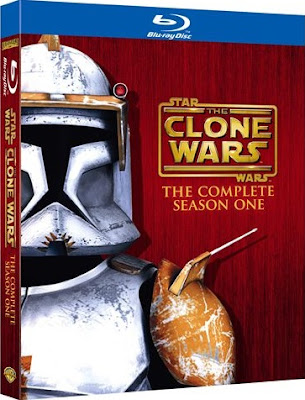 The Clone Wars is an animated, five-season TV series which fills in the three-year narrative gap between the Star Wars films Attack of the Clones and Revenge of the Sith. The Clone Wars have been a source for great speculation and discussion for fans since their fleeting mention in the original movies, and fans were disappointed that the movies only depicted the very beginnings and very end of the conflict. It falls to this CG show to fill in the bit in the middle. However, it's surprising how many Star Wars fans have avoided the series, possibly due to the prequel trilogy being a less-than-compelling series of films.

The Clone Wars actually works very well, and the first season by itself is far more entertaining than the entire prequel trilogy. One reason for this is that it taps into George Lucas's original vision for Star Wars, as an updated and more impressive version of the 1930s Flash Gordon and Buck Rogers movie serials starring Buster Crabbe. Like those old serials, The Clone Wars is a series of punchy, short episodes. Unlike those serials, The Clone Wars is not one big story. Instead, it mixes up stand-alone adventures with longer arcs and moves backwards and forwards in the chronology of the wars. This can be confusing. Several times I thought I'd missed an intervening episode, but the short run-time of the episodes (20 minutes or so each) requires them to move some scene-setting material into an opening flashback sequence, which is also used as a "Story So Far" device on multi-part stories. Just to add to the potential confusion, some stories in Season 1 are revisited in the third season and later.

You can mostly ignore this. In fact, the choppiness of the series does make it feel like a real war story, almost like a series of WWII news reports that flit from Stalingrad to the Pacific to North Africa in rapid succession. This feeling is helped by the show's willingness to change casts on the fly. Although Obi-Wan Kenobi, Anakin Skywalker and Ashoka Tano (Anakin's own padawan apprentice) appear in many of the episodes, the series is happy to switch to a story focusing on another hitherto under-represented Jedi character or on a bunch of ordinary clones trying to defend an outpost with no reinforcements. The series also moves through a strong variety of locations, from familiar places like Naboo and Kamino to completely new worlds to places mentioned before but not seen (like Ryloth and Rodia). In short, The Clone Wars has the entire Star Wars universe to play in and goes wild with it. 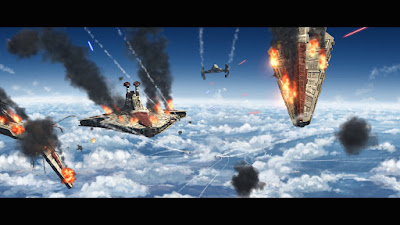 The result is a fun romp which, at its best, is pure pulp SF fun: dastardly robots, colourful villains and heroic Jedi clashing in often visually-stunning set pieces (and space battles far better-choreographed than the hideous messes in the prequel movies). But where The Clone Wars really wins points is how effectively it handles characterisation - especially Anakin's growing frustration and willingness to bend the rules, which is depicted with much greater subtlety than the films - and tonal changes. Some stories are surprisingly grim, like a detachment of clone troopers gradually being whittled down whilst defending an outpost to the last man, or the battle for the Twi'lek homeworld of Ryloth showing the shattered cities and destroyed lives of the civilians caught in the crossfire. The Clone Wars is a fun romp, but that doesn't mean it lacks depth or intelligence.

This first season is mostly a success, although early episodes feel a little hamstrung by limited art assets and budgetary issues. These mostly vanish by the end of the season, especially the gripping three-part story which depicts the liberation of Ryloth by first focusing on Anakin leading the space battle, Obi-Wan on the initial ground assault and then on Mace Windu leading the urban assault on the planetary capital. The quality of the stories is quite high, though a couple of Jar-Jar centric episodes are slightly tiresome. The episodes are also definitely aimed at children, but there are many nods to adult fans as well, and the series does not pull away from the harsher aspects of warfare (it's unusual for the good guys not to take casualties during their adventures, and the moral cost of the violence is always highlighted).

Season 1 of The Clone Wars (****) is available now as part of the Complete Season 1-5 box set (UK, USA). Note that the 2008 Clone Wars movie, which effectively sets up the series (and the Season 1 finale is a sequel to it), is not part of this collection and needs to be purchased separately.
Posted by Adam Whitehead at 12:32

So best to watch the movie before starting the series?

It's not necessary and the movie isn't very good (it was supposed to be the first 3 episodes of the TV series, so was made with a lot less experience and assets than they had later on), to be honest. If you can pick up the film really cheap, then go for it but otherwise I'd just jump straight into the series.

No mention of Ahsoka at all? She's.... fairly pivotal and arguably the entire point of the series, love or hate her (I love her).
There are also many order-lists for watching this show but this one seems pretty decent:
https://www.reddit.com/r/StarWars/comments/35ex94/the_clone_wars_ultimate_episode_order/
Additionally, it went to 6 seasons, whilst the 6th came a little later after the significant events at the end of season 5.