This weekend has seen BaltiCon 50 in full flow, where George R.R. Martin is one of a number of guests attending. During a signing, Martin confirmed a fan theory that's been doing the rounds ever since A Feast for Crows was published. 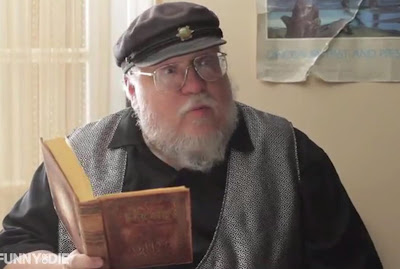 Note that this is not a major theory (it's not one of the "Big Ones") and will mean little to TV viewers, but it's a nice minor theory that has engendered a lot of discussion over the last decade.

Spoiler after the cut: 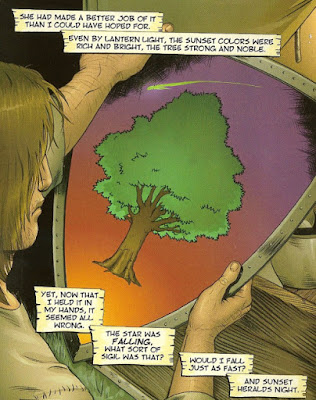 From the comic book adaptation of The Hedge Knight, art by Mike S. Miller (pencils) and Mike Crowell (inks).

The theory is that Brienne of Tarth is the descendant of Ser Duncan the Tall, the companion of the young Aegon V Targaryen and protagonist of Martin's Tales of Dunk and Egg novellas, recently collected in A Knight of the Seven Kingdoms. This is based on the fact that the shield that Ser Duncan has commissioned in The Hedge Knight somehow ended up in the armoury on Tarth, the Sapphire Isle, when Brienne was younger. She recalls seeing it there in A Feast for Crows. Although there are other ways it could have been there, the most obvious is that Dunk married a daughter of House Tarth and they had a son, who became Lord of Tarth (presumably because the daughter had no brothers). The daughter died at some point, allowing Duncan to later become a member of the Kingsguard, rising to become Lord Commander and meet his ultimate fate on the night of the Great Fire of Summerhall.

George also once said that we'd meet a descendant of Dunk's, and a clue would be found in A Feast for Crows. Brienne's shield is the only thing that really comes to mind.

At BaltiCon,  fan Kristen Reed Treado asked, "Will we ever learn how Brienne descends from Dunk?"
GRRM replied, "Eventually. All will be revealed in time."

Other sources have confirmed that George meant that yes, Brienne is descended from Dunk but we won't learn more about the lineage until either later novels or further Dunk & Egg stories clear up the puzzle.

As I said, not one of the critical theories but it's certainly nice to get at least one mystery cleared up.

George also confirmed that he was working on The Winds of Winter and had been writing a Cersei chapter before attending the convention. No new estimate was given as to when the book would be finished.
Posted by Adam Whitehead at 18:43

You should credit the fan, Kristen Reed Treado, as the source of the question.

Indeed. I know Kristen but I was just double checking to see if she wanted to be credited. Since she's fine with it, I've updated the post.

Seems to me that GRRM meant his response to be entirely non-committal: Eventually, all will be revealed. If the precise way it is transcribed (from memory) implies otherwise, remember the transcriber already assumes that Brienne is Dunk's descendant.

You mention sources that allegedly confirm that GRRM meant what I suspect he did not necessarily mean. Are these sources more convincing than this one?

Yes. One of George's minions witnessed the conversation and clarified later on. And George did know he was confirming something not 100% set in stone, but he'd also told us explicitly that something in AFFC would have confirmed the identity of Dunk's descendant, and the only candidate was Brienne.

It's still not 100% clear what you are saying. If GRRM's minion asked GRRM what he meant, and GRRM said, "Yes, Brienne is Dunk's descendant", or something like that, then that is convincing.

You then switch to an argument on the basis of prior evidence, suggesting you are already convinced by prior evidence. But my problem is, I never believed that Brienne was "the only candidate" when he said he left a clue in AFFC. There was also a reference to a "stork of a man", without known heritage, who was a promising tournament knight in his youth (which, from his age, would have been back when Duncan was still at court). It's not much, but neither is there any logical connection between a shield in the Lord of Tarth's armory and the idea that the owner of the shield cuckolded the Lord of Tarth.

Let's put the question this way: Let's say (hypothetically) the book series ends, and we find out who Dunk's descendants are, and it turns out this little mystery has nothing to do with Brienne at all. Let's say we find out that Dunk is Bonifer's father, Bonifer is Rhaegar's father, and Rhaegar in turn is the father of the Prince that was Promised (Jon Snow or whoever). Or let's say that the solution to this mystery turns out to be something nobody has thought of.

If that happens, will anyone be able to say that GRRM has lied to us?

Why would it be someone other than Brienne of Tarth? What would the point be? I don't think it is important- it's just a connection.