Further to George R.R. Martin's earlier confirmation of a fan theory at BaltiCon, he rounded off the day by reading a new Winds of Winter chapter for the very first time. This chapter is called "The Forsaken" and revolves around Aeron "Damphair" Greyjoy. A summary after the jump. 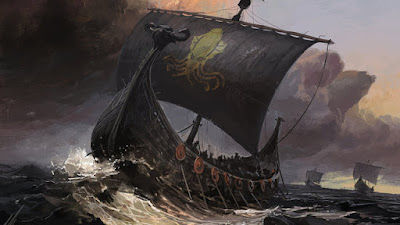 Aeron Greyjoy's plan to raise the Iron Islands against Euron didn't exactly work. In fact, he was almost immediately taken prisoner and chained up in the hold of the Silence (meaning he's been there for weeks or months, including during Victarion's last chapter in A Feast for Crows). Euron comes down to taunt him occasionally.

The Silence departs from the Shield Islands. Euron says he doesn't care what happens to him, they're for their new lords to defend. The Redwyne fleet is sailing west, Leyton Hightower is mustering ships at Oldtown, more ships are gathering on the Mander and the Tyrell host is marching west overland, but Euron doesn't seem concerned. He talks to Aeron, having produced another mute to serve him. Aeron is covered in lice and fleas. Euron says he has had a vision of himself sacking the Arbor and killing the Drowned God. Aeron spits at Euron but Euron just licks it up. They talk about gods and blasphemy and so on. Aeron recalls loving Asha the most of Balon's children and wondering if she could marry Victarion to consolidate enough power to overthrow Euron.

Euron continues to taunt Aeron and we learn that Euron molested Aeron when they were both younger. Euron also confirms that he murdered both Harlon and Robin Greyjoy as well as Balon, making him a kinslayer three times over. Euron also confirms that he sent Victarion to find Daenerys. Aeron tells Euron that he is a demon in human skin. Some of Euron's religious cohorts are there, including a red priest and a warlock from Qarth whose legs have been cut off. He keeps screeching "Pree! Pree!", suggesting that he is Pyat Pree. Euron has taken to wearing an iron crown with shark teeth on it, along with ornate new armour covered in runes and glyphs. Apparently the entire armour is made of Valyrian steel.

Falia Flowers, the bastard daughter of Lord Humfrey Hewett whom Euron took as a lover on the Shield Islands, tells Aeron that she is going to be Euron's salt wife and will thus be "safe". She also says that she and Daenerys will be as close as sisters.

Lucas Codd, who appears to be serving as Euron's right-hand man, disagrees. "Words are wind but blood is power." On Euron's order, Falia's tongue is cut out and she and Aeron are both lashed naked to the prow of the Silence. The chapter apparently ends with Aeron telling Falia, "Take heart, girl. We'll be feasting in the Drowned God's hall soon."

This chapter seems to take place before Sam's last chapter in A Feast for Crows. In that chapter, Vinetown and Starfish Harbour on the Arbor had both been sacked and the ironborn had already besieged Oldtown's harbour. In this chapter it appears that the ironborn fleet has only just left the Shields. It also seems that Euron is moving against the Arbor, not following Victarion at a distance as some readers had theorised. The Redwyne fleet has still not engaged as of the end of AFFC.

Although it's not impossible he survives, it certainly seems like Aeron is about to die at the end of the chapter. This would seem to contradict early reports from GRRM that Aeron was going to have an entire storyline about raising the ironborn against Euron. Either he changed his mind or this is that entire storyline. If Aeron does die, that removes a POV keeping an eye on Euron, which would seem to suggest that Euron will either next show up in a Victarion chapter or his next move will be against Oldtown and we will hear more about that from Sam. If Euron is going to attack Oldtown, that also suggests how Sam's storyline can unfold in a relatively limited timeframe: rather than him going through a full, normal process of joining the maesters and learning (which would take too long) he might be just shooting into the Citadel, finds some valuable intel on the Others with the help of Alleras and co. and then gets the hell out of there and back to the Wall before it all comes crashing down. Certainly it looks like some kind of much-needed consolidation of characters and storylines will be happening in the south of Westeros.

Something that remains curious is how Euron expects to win. Sacking Oldtown or even Highgarden is possible, if difficult, but he is badly outnumbered and outgunned (so to speak) by the Redwyne fleet. I suspect Euron will use his captive warlocks to pull off some crazy magic to destroy the Redwyne fleet before going on the rampage.

Also, it appears that Aeron is the figure Daenerys saw in the House of the Undying in A Clash of Kings:


A corpse stood at the prow of a ship, eyes bright in his dead face, grey lips smiling sadly.

Of course, we will have to wait for the full novel to find out for sure.

ETA: Ran at Westeros has posited a theory that Euron was born a dreamer (his suggestion that he dreamed he could fly mirrors Bran's dreams) but may have been subverted by the Others. This is a bold and interesting theory, suggesting that the Others may be considering things more tactically and using agents in Westeros to undermine the Seven Kingdoms from within. Or it might be totally wrong. But an interesting idea nevertheless.
Posted by Adam Whitehead at 22:22

Email ThisBlogThis!Share to TwitterShare to FacebookShare to Pinterest
Labels: a song of ice and fire, george r.r. martin, news, previews, the winds of winter

Do we know if this is the Aeron chapter he removed from Dance almost 6 years ago?

I think it started out as that one, but got completely rewritten somewhere along the line. George said at one point we'd see and hear more about Aeron raising the Iron Islands against Euron and that'd be a plot point, so it looks like he completely changed his mind and decided to wrap up Aeron's storyline in just one more chapter. Either that, or he was being a bit creative with describing how Aeron's storyline was going to pan out. Someone did point out in Victarion's last AFFC chapter that one of the ironborn got annoyed about Aeron disappearing after the Kingsmoot and Euron laughs in a way that makes a lot more sense if he had him locked up in the Silence all along.