All of STAR TREK now available on Netflix UK

The Star Trek franchise recently disappeared from the US version of Amazon Prime, along with many of the movies from Netflix, as it is all moving over to CBS's inhouse on-demand service, CBS All Access. It is likely that the remaining TV series and movies will follow suit from other streaming services as their contracts expire. CBS All Access will also be the home of the new, still-unnamed Star Trek series which will debut at the end of January. However, the UK (and Irish) version of Netflix has picked up the slack. 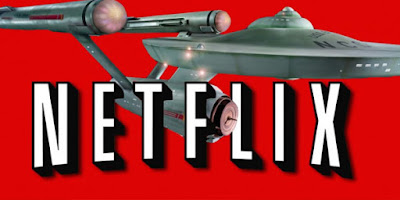 As of yesterday, all 30 seasons and 725 episodes of Star Trek across all of its different incarnations are available. For the count, that's:
In addition, all of the original series, The Next Generation and Enterprise are available in HD as well as standard definition. I strongly recommend watching the HD version of ST:TNG, as they job they've done on it is absolutely phenomenal. DS9 and Voyager have not had the remastering treatment (yet, and possibly ever), but The Animated Series has also been transferred to HD. It's unclear if that version will also be available after it's released on Blu-Ray in the next few weeks.

In addition, Netflix UK is negotiating with CBS to bring the new Star Trek series to the on-demand service at the same time it launches (or, at most, a day later) in the US.
Posted by Adam Whitehead at 21:30

I thought just the movies were exiting US Netflix? Today at least the series' are still on it.

HD remaster of DS9 would be an easy driver to watch the series again. Hopefully they follow through and do it. At that point Voyager would be the only one left in SD.

I can still watch all of the Star Trek series on Netflix here in the US. Are you sure they're going to remove them? If so, what a bummer!

Just to clarify - only TOS movies were removed from Netflix. All of the TV shows and First Contact are still on US Netflix. At least, I watched Measure of a Man last night!