It's been announced tonight that Jerry Doyle, best-known for his role as Michael Garibaldi on Babylon 5, has passed away at his home in Las Vegas at the age of 60. 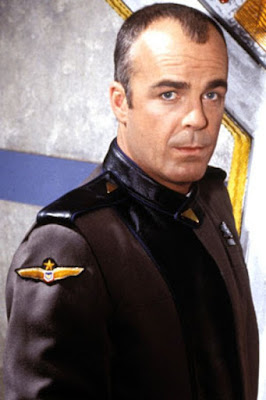 Gerald "Jerry" Doyle had an unusual career trajectory, first training as a commercial pilot before switching gears and going to work as a stock broker in New York for ten years. In 1991 he decided to try his hand at acting and moved to Hollywood. This wasn't completely out of left field, as in 1987 he'd been hired for a guest shot on Moonlighting, based primarily on his resemblance to star Bruce Willis. Shortly after arriving in Hollywood full-time, he won a recurring role on soap opera The Bold and the Beautiful and guest shots on Homefront and Reasonable Doubts before he auditioned for a new science fiction show from J. Michael Straczynski, Babylon 5. Straczynski and his fellow producers responded to Doyle's no-nonsense attitude and cast him in the role of Garibaldi, the titular space station's ex-marine security chief.

Jerry Doyle ended up being one of only four regular actors on the show to make it from the pilot to the finale, and was also the most prolific actor on the series: he appeared in every episode of the series bar one. He also appeared in two of the spin-off TV movies, River of Souls and Call to Arms. Doyle was noted for his mixture of professionalism on-set with playing practical jokes on his co-stars. Doyle was noted for his right-wing political views and enjoyed backstage discussions with his fellow castmembers (particularly the very liberal Stephen Furst, whom Doyle liked to wind up). The Babylon 5 set was a very demanding work environment, as the show's cripplingly low budget meant that there was no overtime budget and the series had to be filmed in strict time limits without the usual Hollywood allowance for re-shoots. This particularly required all of the actors to be on their game, especially the guest stars. When one guest star showed up not having learned his lines, Doyle angrily chewed him out on set.

After Babylon 5 ended, Doyle ran as a Republican candidate for the House of Representatives. Joe Straczynski, although mainly a Democrat, donated to his campaign out of respect for Doyle's convictions. Doyle failed to win office, but later won a new level of fame as a radio talk show host with a nationally syndicated show. He also continued to act on shows such as Martial Law (during which he was used as makeshift weapon by Sammo Hung), Sliders, JAG, NYPD Blue and Open House. He mostly retired from acting in 2004 to focus on his radio work. Appropriately enough, his final acting role was a guest slot on a crime show called Republic of Doyle in 2010.

Joe Straczynski has penned a memorial to Doyle here.

I very briefly met Jerry Doyle at the BabCom '96 convention in London. Held the weekend after the classic episode Severed Dreams aired in the UK for the first time, the convention celebrated Babylon 5 at the very height of its success and popularity (B5 - arguably - was a better-known and more successful SF show in the UK and most of Europe than it was in the States). Doyle, then still married to co-star Andrea Thompson (who played Talia Winters in the first two seasons), was highly charismatic, telling stories about life on set and acting as a impromptu compere and stand-up. As Joe Straczynski was not attending, Doyle also took it on himself to brush up on news about the show and some of the spin-off media to handle the more hardcore questions. He was very funny and clearly enjoyed his time on the series.

Not having any clue about discussions he had with castmates, when I first saw Jerry Doyle pop up as a political commentator, I had to do a double-take to make sure I wasn't mistaken as to who he was. I didn't like Bablyon 5 as much as some other viewers, but I always thought Doyle was at the heart of what was best about it. He'll be missed.