Commissar Ciaphas Cain's adventures continue! This time we return to the beginning of his career, when he is still assigned to the 12th Valhallan Field Artillery. With the last few cushy years of the assignment on Keffia coming to an end, Cain and his unit are reassigned to Perlia, a world which has been deadlocked between the Imperium and a huge Ork invasion force for some months. Cain and his forces are part of a reinforcing army, but the Orks, aware that they are on their way, have laid a trap in the Warp. With Cain's ship heavily damaged, he and his constant companion Jurgen bail out in an escape pod and crash-land thousands of miles behind enemy lines, with hundreds of thousands of Orks lying between them and salvation. Cain, reluctantly, has to find his way through the Ork lines back to safety, only to find himself saddled with a band of gung-ho rebels and a train of civilian refugees... 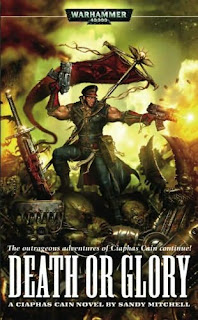 Death or Glory is the fourth Ciaphas Cain novel and author Sandy Mitchell decides to shake things up a little by rewinding to his early days when he wasn't as well-known with such a formidable reputation. On the one hand it's sad not to see the familiar faces of the Valhallan 597th knocking around, but on the other Mitchell's decision to shake things up pays off handsomely, as Death or Glory is the best book in the sequence to date.

The structure is a sort-of demented black humour version of Erikson's Chain of Dogs, as a terrified Cain tries desperately to avoid confronting the enemy and hopes to be able to sneak past them. Instead he ends up escorting hundreds of civilians and isolated Planetary Defence Forces from behind enemy lines through several major battles towards safety. Along the way he meets a bunch of colourful characters and forges his later reputation, as Cain's actions inspire the demoralised defenders elsewhere to great deeds. As usual Cain is self-deprecating and makes claims of cowardice, but Mitchell seems to finally get a handle on the dissonance between Cain's self-professed cowardice and lack of acumen with the self-evident skills the character displays, by citing Cain's arrogance and his love of having an amazing reputation which he cannot risk being besmirched, possibly even at the cost of his own life. This realisation allows Cain to shake off the Flashman-in-space tag and begin developing more satisfyingly as a character in his own right.

Death or Glory is also the funniest book in the series so far. We learn that after Cain is reported KIA, the resulting bureaucratic controversy to get him undeclared dead takes so long to sort out that eventually a standing order is given that Cain is never to be reported KIA until he's been missing for several years (this order is not rescinded even when Cain apparently does die of extreme old age, meaning he's still on the active duty roster years after being buried with full military honours in front of the Imperium's most senior military personnel). Elsewhere we learn that a scholarly work on the Orks has the frankly brilliant title Waaagh! and Peace ("Waaagh!" being the traditional Ork battlecry in the WH40K universe), whilst the Orks have an apparently religious belief that any vehicle painted red or given red strips will go faster than anything else (solidifying the characterisation of the Orks as demented Essex lads and Cockney wide-boys). One of the members of Cain's convoy is a vet based on a character from the All Creatures Great and Small novels and TV series. And so on.

Weaknesses? Only a few niggles. Whilst it's great the book doesn't outstay it's welcome, at 250 pages (in the omnibus) it does feel a little short for its epic scope. A few more episodes of Cain's journey (which he admits he skips over) wouldn't have gone amiss. It also would have been interesting to see Cain reunited with his unit at the end given his CO's constant doubts over Cain's abilities, but alas we are denied this potentially amusing scene.

Death or Glory (****½) is ridiculously entertaining fun, written with verve and wit. Not high literature, but terrifically engaging and sure to leave a smile on your face. The novel is available now in the UK and USA as part of the Defender of the Imperium omnibus.
Posted by Adam Whitehead at 10:26