Shadowmarch Castle is in crisis. Barrick Eddon is missing, presumed killed in battle, whilst his sister Briony has also vanished from the castle, leaving it under the redoubtable stewardship of the ambitious and scheming Hendon Tolly. An army of the Twilight Folk has occupied the landward side of the fortress but not besieged the castle proper, but far to the south the great city of Hierosol is under attack by the armies of Xis, threatening the safety of both the fugitive Quinnitan and King Olin Eddon, a captive of the city's rulers. 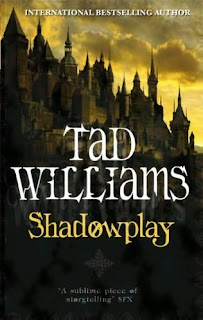 Shadowplay is the second volume in the Shadowmarch quartet and carries the series past its halfway point. As with the first volume it's a competently-executed, traditional secondary world fantasy, but as a novel it's even slower-moving and more badly-paced than the first book.

The book is divided into several widely-separated narratives: Barrick and Ferras Vansen's adventures beyond the Shadowline, Briony on the run with a bunch of theatrical players, Olin as a captive in Hierosol, Chert the Funderling trying to help his amnesiac, adopted son and various characters in Southmarch living under the new regime. Unfortunately these narratives aren't really tied together well. They also vary wildly in quality and execution. The autarch's assault on Hierosol is tense and well-handled, but Briony on the road with the travelling players is dull. Even worse is Barrick's adventures beyond the Shadowline, where Williams aims for a kind of surreal mysticism and ends up with turgid boredom (though a few moments are genuinely unsettling). Chert, the most interesting character from the first book, is also hugely reduced in importance and gets little to do here. 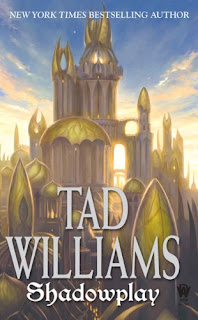 The book's biggest problem is that whilst we have some big battles, some ominous scenes and some intriguing (if sometimes soap opera-ish) developments, the overall storyline doesn't develop very far. For only the second in a four-book series, it feels like Williams has far too many balls in play and is only able to move each of them forward a very small amount rather than the whole thing forward decisively (probably a reason why this trilogy expanded to four volumes).

The book is somewhat frustrating as Williams is still a good writer and some storylines and characters are well-handled, but overall the book's pace feels misjudged and there are no real surprises here.

Shadowplay (***) is a competently-executed fantasy novel, but the plot is slow to develop and there are too many storylines which feel extraneous or badly-handled to be really satisfying. The novel is available now in the UK and USA.
Posted by Adam Whitehead at 15:48

I thought Shadowplay was much better than Shadowmarch. I really enjoyed Barrick/Vansen chapters, they were the best parts of the book. I would give Shadowplay five stars or four-and-half.

I've read the series through to the end, and thought the fourth and final volume really came together and was quite exciting. In Williams' other series, I felt the stories built well but had a weak endings, particularly the Otherland series, so it's interesting to me that in this series the opposite seems true -- slow to start out, but ending quite nicely.

I haven't read any of his fantasy, but I thought the Otherland series suffered - to an increasing degree as I progressed through the four books - from being the same thing over and over again: travel through an endless series of simulated worlds with very little getting accomplished. Despite the potential of the story and the writing, it ended up being utterly tedious. Shadowplay sounds the same.

Evan as a Williams fan the similarities to the earlier trilogy & the generic fantasyland did bother me with this series but the themes & characters are developed-e.g Vansen becomes more interesting