Decades from now, the polluted, overcrowded Earth is dying, wracked by natural disasters and war. Seventy thousand people have escaped to colonise the planet Carpathia, founding the settlement of Forthaven. After ten years, the final transporter from Earth is due to arrive but is suffering technical problems. As the personnel of Forthaven struggle to survive, they are wracked by internal dissent, problems with a group of outcasts from the settlement and other, more mysterious problems from elsewhere... 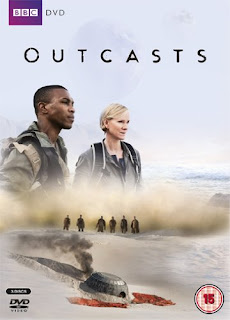 Outcasts is an eight-episode series which recently aired on the BBC. Intended to be a returning series, the show was axed after its first (and only) season due to low ratings but high costs. It would be an understatement to also say it had a 'mixed' reception.

Outcasts looks great. Filmed on location in South Africa, the show's location shooting (enhanced by subtle CGI and other effects) adds a distinctly alien feeling to the show, helping the sense of otherworldliness that the producers were aiming for. However, whilst it looks big-budget there are clear limitations on this shooting: all of the action in the series seems to happen in a radius of about ten miles from Forthaven, on either side of one distinctive mountain, and after a while the impressive scenery becomes increasingly over-familiar (the same problem Lost suffered from). Forthaven itself is convincingly downbeat and lived-in, made up of box containers dropped from orbit which have been emptied and turned into cheap living quarters. There's also a nice contrast between the down-and-dirty living quarters to the high-tech HQ (actually a parked transport craft) and medical facility, though this doesn't quite transfer into the sociology of the settlement as much as you'd expect (people living in shacks don't seem to really mind other people are living in air-conditioned comfort).

The quality of the performances is rather more variable. The stand-outs are Amy Manson as Fleur Morgan and Daniel Mays as Cass Cromwell, two of the settlement's security operatives who are usually at the forefront of any investigation that might be in progress, as well as serving as liaisons between the colony's government and its military wing of semi-autonomous 'expeditionaries'. These two actors have genre form - Manson from Being Human and Torchwood and Mays from Ashes to Ashes - and take their exposition-laden dialogue in their stride. Hermione Norris is much more out of her depth as Stella Isen (who is inexplicably pulling double time as head of security and chief medical officer), whilst Liam Cunningham veers from charismatic to wooden as President Tate (sometimes in the same scene), as if he can't quite get a handle on the character. Ex-BSGer Jamie Bamber is excellent in a role light-years away from Apollo, but his role in the series is somewhat less prominent than advertised. Ex-Ugly Betty star Eric Mabius gives a quite good performance as Julius Berger, the settlement's resident bad-but-charming powermonger, even if his tactics (playing the religious card, pursuing pragmatic politics or rallying the rabble) seem to shift randomly.

The series' general premise is also solid. The settlement is isolated with little news from Earth and there are unknown forces at work beyond its walls (although after ten years you'd think that the expeditionaries would have discovered some more hard information about the planet and perhaps established more than just one colony town), setting up a vibe somewhere between Battlestar Galactica's New Caprica arc and Lost, complete with a group of 'Others' stirring up trouble in the wilderness. A whole host of backstory issues are also waiting to be explored, such as characters' murky pasts, some dark secrets from the founding of the colony and the past lives on Earth that some of the characters are trying to escape.

So, we have a solid premise, some good actor, a reasonable budget and some great scenery. So what went wrong?

Basically, the writing is awful, jam-packed with cliched dialogue, painful amounts of exposition and some true howlers ("What are they after?" "I know what I'd want...revenge,") that would fail any basic Scriptwriting 101 class. The general story arc - relating to a virus that once ravaged the colony, a bunch of outcasts from the settlement and Berger's powerbase-building efforts - is okay, if a bit familiar, but executed sloppily and clumsily. The 'problem of the week' episodes mid-season are also formulaic: either a random person emerges from the 70,000 random extras who make up the population to cause some crisis or something weird happens outside the settlement which requires the intervention of the command staff.

Most of this is pretty tiresome, but Manson and Mays emerge as the best actors on the show because they just roll with it, whilst the others seem to struggle with their dialogue quite frequently. Even so, character motivations are often clumsily-established and somewhat vague. It's not until we're about three-quarters of the way through the season that that the sloppily-set-up threads start coming together more satisfyingly, with attempted coups, viral warfare and the introduction of new factions giving the show a late-season sense of dynamism and energy that it was sorely lacking at the start.

Unfortunately, this is too late in the day. Outcasts (**½) had a lot of promise and the ingredients are all solid, but the execution is all too frequently mediocre to rise above the barely-watchable. If you can hang on to the last two episodes, a great deal more potential appears, but is then scuppered by the cliffhanger ending you know is never going to be resolved. The show is available now on DVD and Blu-Ray in the UK, with no US release apparently planned at the moment.
Posted by Adam Whitehead at 18:52

Email ThisBlogThis!Share to TwitterShare to FacebookShare to Pinterest
Labels: outcasts

I've rather enjoyed the show and I would have continued to watch it if it weren't cancelled. I find your analysis spot on: good resources, interesting concept, bad script.

Basically, the writing is awful, jam-packed with cliched dialogue, painful amounts of exposition and some true howlers

This. Unfortunately. It all started out so well.

I watched the first 3 eps. First one was good, had a lot of promise. The next two were boring and crappy. Fleur was also developing nicely into an annoying Mary Sue.

for me (I'm french), it's the british accents who are prodigious in a sf theme like that! maybe it's stupid, but me and my wife watching tv show in original language, and because many of the american productions are weak, we turn to british ones (yeah, because in my country, it's impossible to watch sf or fantasy stuff... :-(
so, Outcasts is not BSG, but in my opinion, it's a pretty good tv show!

From Episode 5 onwards the show became much better. But by then the decision had been made to cancel with the moving of the timeslot after ep4.

Eric Mabius was fantastic in this megalomaniac bad guy role, he has a powerful screen presence.

Horrible show. It was almost like they were trying to show what happens when the bad guys win- but didn't actually know that that's what they were doing.