Horror author David Wellington is moving into fantasy, adopting the pseudonym David Chandler for his Ancient Blades Trilogy. The three books are being published in rapid succession: Den of Thieves in July, A Thief in the Night in October and Honor Among Thieves in December. The trilogy is also significant as it marks the launch of the UK-based HarperCollins Voyager as a worldwide brand, following in the success of Orbit going global a couple of years ago.

The UK cover artwork is as follows (thanks to Jussi at Westeros.org):

The US cover art is, erm, not quite as good: 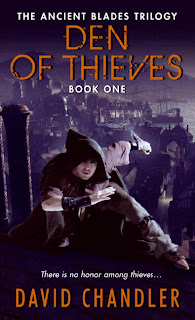 "A mix of pulp and high fantasy, at turns funny, suspenseful, and touching, David Chandler’s Ancient Blades trilogy is laden with twists and turns, high adventure, a little romance, and a lot of fun.

Croy is a knight errant, and bearer of an ancient blade with a powerful destiny. He's also kind of, well, dim. He believes in honour. He believes that people are fundamentally good, and will do the right thing if you give them a chance.

Unfortunately, Croy lives in the city of Ness. A thriving medieval city of fifty thousand people, none of whom are fundamentally even decent, and who will gleefully stab you in the back. If you give them a chance.

Ness is also the home to Malden. Malden is a thief. He lives by his wits, disarming cunning traps, sneaking past sleeping guards, and running away very fast whenever people are trying to kill him. Which is often. One time Malden stole a crown. And then he had to steal it back to avoid a civil war. Croy got the credit, of course, because he's a noble knight. Another time the two of them went into the tomb of an ancient warrior race, and Croy accidentally started a barbarian invasion. Guess who had to clean that up?

They probably wouldn't be friends at all if it wasn't for Cythera. Cythera is a witch. A mostly-good witch. And despite herself she can't stop thieves and knights falling in love with her… At the same time."

Voyager seem to be marketing this to the Joe Abercrombie/Scott Lynch crowd. If Chandler is as remotely as good as those guys, it should be good stuff :-)
Posted by Adam Whitehead at 19:52

wow, the US cover art is realy atrocious - especially when present next to the UK covert art which is pretty awesome.

I may have to do some digging to get copies of this one - unfortunately I seem to have a harder time getting HarperCollins books than I do others.

The Joe Abercrombie and Scott Lynch crowd are a single group? Because i would characterize their series' as... very different. Like way different. WHATEVER.

The UK covers are way better. Which just goes to show that US marketers think everyone who lives here is an idiot.

The blurb for this series sounds similar to Riyira Revelations by Michael J. Sullivan. Orbit recently announced that it would rerelease the six book Riyira Revelations in three books in Nov. and Dec. 2011, and the last book in Jan. 2012.

These do sound interesting. Those covers are a hell of a lot like JA's; surely a bit too close for comfort....

Heh, sounds quite fun, actually. I enjoy this type of thing, especially if it's more like Abercrombie's First Law trilogy than his two later books ( which I didn't enjoy too much, probably just because there's a point when gritty fantasy turns into pointless crude humour for me) But if it's anything like Lynch, I'm definitely going to be getting these.
Thanks for the post!

The US covers look to be aiming at the lucrative urban fantasy segment.

Normally I prefer US covers to their UK counterparts...but this one is atrocious :(

and I have to agree that it does look like an urban fantasy cover...and a bad one at that...

the books sounds good but with that cover I wouldn't pick it up at bookstore in a million years...if they want to follow Orbits's example they should keep the covers internationally:)

The UK art is definitely better.

Agreed w/Davieboy: The UK version might indeed be better but it's awfully close to Joe Abercrombie's BEST SERVED COLD UK cover. Looks like the US is going more for the Brent Weeks crowd.