More DANCE WITH DRAGONS and GAME OF THRONES news

HBO have released the first 'proper' publicity poster for the series. A version of this poster will also adorn the new TV tie-in editions of A Game of Thrones in both the UK and USA: 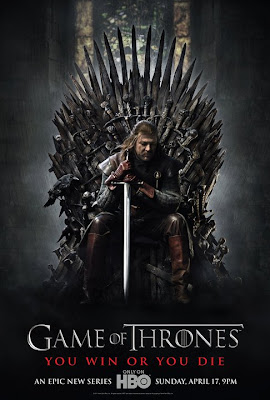 For something nifty that fans of the books should clock immediately, check out the mega-res version of the poster and pay careful attention to the crow...

HBO have also unveiled the titles of the first two episodes of the series. Winter is Coming will air on 17 April, followed by The Kingsroad on 24 April. You can also now view the first two full clips from the series on YouTube: Jon giving Needle to Arya, and Tyrion arriving at the Crossroads Inn.

The future of the Seven Kingdoms hangs in the balance. In the east, Daenerys, last scion of House Targaryen, her dragons grown to terrifying maturity, rules as queen of a city built on dust and death, beset by enemies. Now that her whereabouts are known many are seeking Daenerys and her dragons. Among them the dwarf, Tyrion Lannister, who has escaped King’s Landing with a price on his head, wrongfully condemned to death for the murder of his nephew, King Joffrey. But not before killing his hated father, Lord Tywin. To the north lies the great Wall of ice and stone – a structure only as strong as those guarding it. Eddard Stark's bastard son Jon Snow has been elected the 998th Lord Commander of the Night's Watch, but he has enemies both in the Watch and beyond the Wall, where the wildling armies are massing for an assault. On all sides bitter conflicts are reigniting, played out by a grand cast of outlaws and priests, soldiers and skinchangers, nobles and slaves. The tides of destiny will inevitably lead to the greatest dance of all…

Fantasy writer and occasional writing buddy of GRRM Daniel Abraham on his early reaction to the book:

"Apart from the overwhelming peer pressure that comes from everyone on God's green earth apparently looking forward to this one, I have a little insider information about this one. I started reading A Song of Ice and Fire over a decade ago, and from everything I've heard and what I've seen of the in-process manuscript, this is *the* book I've been waiting for. Not only is it made out of the characters I enjoy the most, but my sources inform me that the structure of the book is what I was hoping it would be. I am very, very optimistic about this one."

Also check out David Louis Edelman's interesting thoughts on the book in the same post, where he muses on how Martin can handle the pressure and the expectations for the book.
Posted by Adam Whitehead at 11:41

Email ThisBlogThis!Share to TwitterShare to FacebookShare to Pinterest
Labels: a dance with dragons, a game of thrones (TV series), a song of ice and fire, daniel abraham, george r.r. martin, hbo, news

The page where Daniel Abraham muses over ADwD also has some cool new cover art for FORT FREAK which I hadn't seen anywhere else before...

(I think it's Ramshead on the cover)

now, let's see how long martin takes to do THE WINDS OF WINTER:)

I see the crow, but what's so remarkable about it...

It's the Three-Eyed Crow from Bran's dreams :-) If you look at the mega-res version you can just see the third eye on its head.

Just kidding - this is so awesomely exciting!! IMO only second to Peter Jackson's LOTR films.. (but a very very close second!)

I saw the 3rd eye but it's been too long since my last read - i forgot about the 3-eyed crow.. cool..! (although you could interpret it as having 2 eyes - a bizarre flounder-crow mix!)

Good eye, Wert. I wouldn't have noticed that on my own.

adam: anon 2's right. unless martin says anything else, let the 5-10 year wait for THE WINDS OF WINTER begin.

For sanity's sake, I'm not expecting TWoW any earlier than late 2015-early 2016 at the earliest. Based on the last two books that strikes me as being at the optimistic side of realistic.

I was wondering if there's any way that you can put an embed of this on your blog:

Does nobody else have a problem with the fact that they changed the title? Or did that slip past everybody? They didn't put the actual title of the book on the cover, they put the name of the television show instead. I just think that's so incredibly lame, as if the tv show is more important than the books...the books must now bow to the wishes and publicity department of HBO! Sad.