HBO have released a metric ton of new promo material for Game of Thrones today, starting with the four posters shown below. 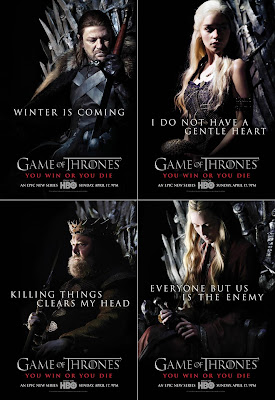 They've also released four 'House' videos, one each for Houses Targaryen, Stark, Lannister and Baratheon. The Lannister one is notable for our first glimpse of Charles Dance as Lord Tywin Lannister, whilst the Baratheon one makes a point of mentioning Stannis several times, though he won't be cast until the second season.

Those based in the USA should also note that Comcast have a ton of exclusive videos (USA-only at this time) on their site, including expanded behind-the-scene features and character profiles (including Jason Momoa characterising Khal Drogo as 'the biggest pimp'). Winter is Coming has YouTube links.

Excellent stuff, though I think HBO need to be careful lest they overload the potential viewer with featurettes, posters and teasers. There's quite a lot of material out there now.

Meanwhile, Bantam editor Anne Groell has released a picture of herself holding the manuscript of (95% of) A Dance with Dragons: 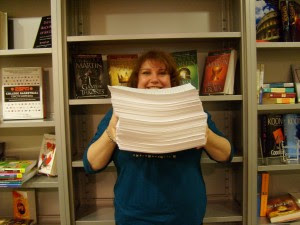 Impressive. And in a little under four months, everyone will be able to read it :-)
Posted by Adam Whitehead at 19:05

If it seems like they're overloading it's most likely because the suits and producers know exactly who is and isn't aware of the show. I work in film/tv and anything as large as this show will have a substantial amount of market research behind it. It feels like overkill to you and I, who would watch the show regardless of the marketing, but the mainstream viewer still needs a stick in the eye before they'll blindly watch a new show. And I suspect HBO is especially nervous given the monstrous budget, and occasional negative genre connotations. History has proven that Rome (the show, though I suppose the empire also works) was too large to support, and HBO will do everything they can to avoid a repeat of that sad situation.

Thanks for the links!

Yes, I agree with you. I think it is becoming a little bit too much. The series premiere is still some weeks away. I hope they don't keep pumping out material at this speed till then. I have not watched all the new clips yet. I want to have some surprises in the series:)

All these clips will probably end up on the DVD anyway. The "House" and "Character Profile" clips are remarkably like those featured on the Rome DVDs.
Olaf

I think they're trying to familiarize people with the world. When I talk to people that don't like fantasy, one of the most common complaints is that it takes them too long to get immersed and they feel lost. HBO is trying to avoid that.

A Read of Ice and Fire just started today on Tor.com