Some info on the sequel to THE PASSAGE

Justin Cronin's The Passage was one of the biggest-selling and highest-profile genre releases of last year. The American paperback is due to hit on 17 May with a new cover and also an extract from the sequel, now revealed to have the working title The Twelve. The Twelve is currently due for release in 2012. The UK paperback of The Passage is already available. 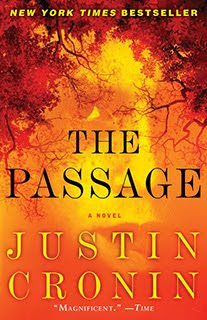 Email ThisBlogThis!Share to TwitterShare to FacebookShare to Pinterest
Labels: justin cronin, the passage

I heard the title for the sequel a few months back along with the tentative title for the third book in the trilogy: The City of Mirrors. If Cronin stays on track we'll see The Twelve next year in the summer with the third coming out at earliest in 2014.

I thought the beginning portion, featuring the FBI agent, was some of the best work I read last year. Once we got to the future society, I thought the book became pretty standard survival-horror.

Don't think I'd pick up the sequel.

Did The Passage really sell that well? USA Today posted a list of the top 100 best-selling novels of 2010 a few months back and Cronin was conspicuously absent. Considering the marketing push the book got, I wonder if it lived up to expectations.

I know in the UK that THE PASSAGE sold a monumental number of copies for what was effectively the first release from a debut author (I don't recall Cronin's two previous, non-genre authors even being published in the UK).

What the situation in the USA is, I'm not sure. I know it did very, very well over there, just not shifting the many hundreds of thousands that would be needed to get into even the Top 100.

I guess I just expected that the push it got -- and all the buzz -- would put it on the list, but I admit I'm not entirely sure what even constitutes "huge" book sales as the market is very different from films/music (moreover, sales numbers are rarely widely publicized).

I'm sure it will do very well in paperback though. The sequel could end up doing bugger numbers if the series increases in popularity (assuming all those first books get read... I made it all the way through mine but it was a commitment and occasionally a chore).