A planet-wide insurrection has broken out on Periremunda, necessitating the deployment of the Imperial Guard to the planet to help crush it. The Valhallan 597th is part of the deployment, along with its increasingly legendary commissar, Ciaphas Cain, hero of the Imperium. As usual, Cain hopes for a quiet, simple assignment where he can sit out the trouble, and also as usual he finds himself instead at the cutting edge of danger. This time, a simple rebellion is revealed to mask a whole number of other threats which Cain and his ever-faithful aide Jurgen have to deal with. In this case, operations are complicated by Periremunda's unique geography, a world of burning, uninhabitable deserts with settled plateaus rising above them. 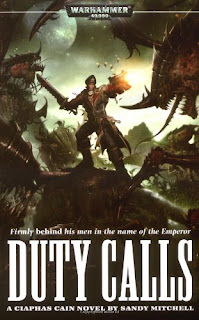 Duty Calls is the fifth Ciaphas Cain novel and, disappointingly, is a little bit of a let-down after the terrific Death or Glory. The good news is that we are reunited with the Valhallans 597th and also with Inquisitor Amberley Veil and her retinue of demented allies. The bad news is that Mitchell has seriously dialled down the humour and amusing references in this book. There are a few (mostly restricted to the footnotes and the extracts from General Sulla's ludicrously bombastic memoirs that provide a commentary on events where Cain is not present), but this is a more serious novel than its predecessors.

Not that this is a bad thing. Mitchell is great at describing the action which is the cornerstone of any Warhammer 40,000 novel, and is also solid at handling horror and drama as well as the traditional black humour of the books. So whilst Duty Calls won't have you laughing as much as its predecessor, it's still a solid and readable action-adventure tale, refreshingly short and to the point with a good line in characterisation. Whilst the book's main storyline is self-contained, some dangling storylines are picked up from Death or Glory and carried through to the next book in the series, Cain's Last Stand, resulting in the sense of bigger events unfolding outside of this one conflict.

Mitchell has created an interesting world in Periremunda and describes its scenery and geography with gusto. Elsewhere the book suffers from perhaps a tad too much reliance on the Ciaphas Cain formula - Cain is bluff and cowardly but emerges a hero, whilst Jurgen and his melta gun and psi-inhibiting abilities save the day more than once - as well as a sense of plot overload. As well as the rebellion, Mitchell also jams in genestealers, Chaos cults, a renegade Inquisitor and a meeting with a particularly fanatical branch of the Sisters of Battle. As a result some elements are under-developed. The planetary arbitrator goes from being a major character at the start to virtually vanishing altogether, whilst Cain's ideological clash between his pragmatism and the Sisters' idealism is never developed to its full potential.
Still, even slightly sub-par Cain remains highly entertaining and readable. Duty Calls (***½) is available now as part of the Defender of the Imperium omnibus in the UK and USA.
Posted by Adam Whitehead at 18:37