The Last Airbender: The Legend of Korra, the sequel series to the excellent animated series Avatar: The Last Airbender, has an air date: the series will debut in the USA on Nickelodeon in 2012. We also have our first look at Korra, the titular central character: 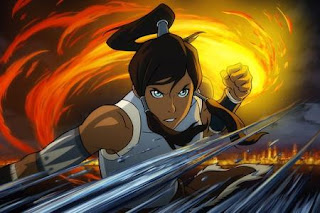 Korra lashing out with destructive magic, possibly having just sat through M. Night Shyamalan's film version of the original series.
The new series picks up the storyline seventy years after the events of Avatar. Aang has passed away and Korra has become the new Avatar. Having already mastered fire, water and earthbending, she travels to the steampunk-eqsque Republic City to seek out Aang's son, Tenzin, to learn the art of airbending. However, there is widespread distrust and paranoia over magic-users developing amongst the population, leading to civil unrest.

Originally mooted as a 12-episode mini-series, Nickelodeon have extended the first run to 26 half-hour episodes. Rather than a multi-year arc, the new series will apparently adopt the 24 model of having a different, over-arcing storyline each season (suggesting the project may be evolving into an ongoing series rather than a limited one). Original series producers Michael Dante DiMartino and Bryan Konietzko are on board to write every episode, whilst vocal talent will include familiar Avatar stalwarts such as Dante Basco (Zuko) and Dee Bradley Baker (Appa and Momo) in new roles, as well as relatively high-profile actors like J.K. Simmons (J. Jonah Jameson in the Raimi Spider-Man movies) playing Tenzin, Daniel Dae Kim (Jin from Lost) as Hiroshi Sato and Lance Henrickson (Bishop from Alien movies, amongst many other roles) in an undisclosed military role.

Avatar: The Last Airbender was a great show. Whilst it's sad to say goodbye to the old crew, it'll be interesting to see the world explored further in the new series.
Posted by Adam Whitehead at 17:31

Email ThisBlogThis!Share to TwitterShare to FacebookShare to Pinterest
Labels: avatar: the last airbender, avatar: the legend of korra, news

I'll admit, I had doubts when I first heard about this. I didn't see how they could possibly top, or extend, the awesomeness of the original series. The more I learn about it, however, the more excited I become. It actually seems like a fairly cool premise. Thanks for the info, it's always appreciated!