Songs of the Earth by Elspeth Cooper

Condemned to be burned as a witch for the heresy of using sorcery, young Gair is surprised when his life is spared by a whim of the Preceptor. Exiled from his homeland, Gair is taken into the care of Alderan, a man on the lookout for those with Gair's talents. Alderan takes Gair to a place of safety where he can learn to control his powers, but there are those within the Church who are not mollified by the Preceptor's pardon and have sent their witchfinders to track Gair down. 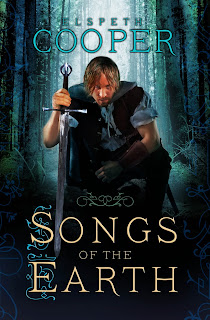 For himself, Preceptor Ansel is old and failing, near the end of his life. But before his time is done, he hopes to unveil a secret about the Endirion Church which will change everything...

Songs of the Earth is the debut novel by Elspeth Cooper, the first in The Wild Hunt Trilogy. It's a traditional secondary world fantasy with a number of interesting flourishes which rise it above the pack.

At first glance there is little new or surprising about the novel, which is firmly in the standard epic fantasy mould. Young orphan hero of uncertain birth (though there's some nice genre-nodding jokes about that), a magical academy, romance, elves (sort of) and so on. The academy stuff recalls The Name of the Wind (in a good way) whilst the notion of magic as a song is intriguingly-handled, but again unoriginal. Characterisation is solid and somewhat more subtle than first expected. Gair is the typical young hero protagonist, but he goes through some interesting and somewhat traumatic developments which start making him harder-edged and more ruthless. Alderan is pretty much the standard 'old wizard mentor' character, though amusingly tilted slightly more towards Bayaz than Belgarad. And so on.

What is interesting is that a number of the major characters are handicapped in some way: Gair is branded and recovering from torture and trauma; Ansel is old, infirm and suffering from a lung disease; Darin has diabetes; and Aysha has two crippled legs, but her shapeshifting skills enable her to avoid her disability for a few hours per day. Cooper doesn't beat the reader over the head with this (in fact I was halfway through the book before noting it), but it's interesting and all-too-rare to see handicapped and infirm characters depicted in a fantasy novel, with disabled issues viewed though the lens of a world where magic exists (but its healing properties have limits). It's not a huge deal, but it's an interesting minor theme that Cooper develops subtly through the book.

Elsewhere the plot develops nicely, the magic is intriguingly high-end (after a number of gritty, low-magic works it's good to see people throwing up fortress-enveloping shields or creating entire storms from scratch) and the characters work well. On the minus side, it's nothing we haven't seen before.

Songs of the Earth (***½) is a solid debut novel with plenty of promise but, as this stage, not a huge amount of originality. It will be published on 16 June 2011 in the UK and imports should be available in the USA.
Posted by Adam Whitehead at 16:16

Email ThisBlogThis!Share to TwitterShare to FacebookShare to Pinterest
Labels: elspeth cooper, songs of the earth