First up, a new trailer for the HBO series. Some cool elements here, such as the first dialogue from Varys (Conleth Hill), our first look at Old Nan (the late Margaret John) and, most impressive, the first long-shots of Winterfell and King's Landing.

Secondly, a featurette on House Stark, featuring some interesting musings on the house's honour and its members, featuring the first appearance of some actors in behind-the-scenes featurettes.

Finally, George R.R. Martin kills a panda with a Dance with Dragons hardcover, just because (thanks to Anon for the tip-off): 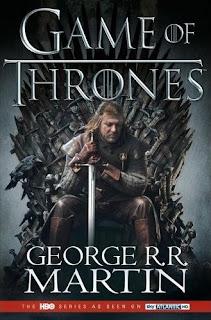 Email ThisBlogThis!Share to TwitterShare to FacebookShare to Pinterest
Labels: a dance with dragons, a game of thrones (TV series), a song of ice and fire, george r.r. martin, hbo, news

The UK tie-in cover has been revealed as wel on Amazon.

Ok, so seeing The Wall was freaking awesome, but that last video terrified me. Thanks a lot Wert.

Wert, I sure would appreciate your take on this:

I'm not sure what more I could add to that discussion. The editor in question has apologised quite profusely and Ian has been moved to a new editor and his next two books should hit the new dates. Other authors have been affected as well (at least two I'm hearing) and the situation is not great for the reputation of the editor or for Tor.

But there's quite a lot of discussion on the situation on Ian's blog and on some other blogs (Pat's just posted about it). I don't think I need to get into it as well.