A Dance with Doorstops

With the publishers gearing up for the release of A Dance with Dragons on 12 July, George R.R. Martin is continuing to round off the book, reporting that the novel has passed 1,600 pages in manuscript. In order to hit the July publishing date, the book apparently has to be handed in at some point in May; such is the manner in which the bulk of the book has already been edited, copy-edited and typeset, the publishers literally can get the book on shelves from delivery of the final pages in just a matter of weeks, which is an impressive achievement. 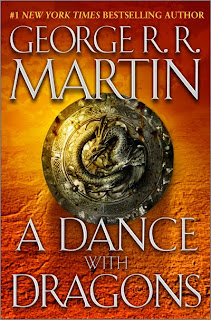 Will the book be thicker in size than it is wide?
Of course, the book passing 1,600 pages has triggered concerns about fitting the book into one volume. Martin has previously said that A Storm of Swords - 1,521 manuscript pages and 420,000 words - was at the upper limit of what his publishers could put in one book. More ominously, the decision to split A Feast for Crows came when the manuscript for that book also exceeded 1,600 pages.

No-one seems to have talking about a split - at least in the hardcover edition - just yet, indicating several factors have come into play. First off, sales of A Song of Ice and Fire have increased since 2000 to the point where a new George R.R. Martin novel is in the same sales bracket as a new Stephen King or a new Robert Jordan. Economies of scale mean that the publishers can now be much more confident of making a significant return and profit even given the greater production costs involved in producing a 1,000-1,100 page hardcover. Secondly, A Feast for Crows was split not just because of the 1,600 MS-page size, but also because Martin was still projecting that hundreds of more pages would be required at that point to bring the book to completion. For Dragons, Martin is projecting merely dozens more (and it appears all or most of these pages exist in draft, needing only finalisation rather than writing from scratch).

For comparison with other SFF novels of immense length, Tad Williams' To Green Angel Tower is 520,000 words, Peter F. Hamilton's The Naked God has been estimated at 470,000 words and the complete, one-volume Lord of the Rings is around 460,000 words. Recent doorstops The Way of Kings (by Brandon Sanderson) and The Wise Man's Fear (by Patrick Rothfuss) are positively modest in comparison, coming in at 385,000 and 395,000 words respectively.

Of course, whilst the size of the book is impressive, far more telling is how well the narrative supports that immense length. If Martin delivers a huge novel which also furthers the overall storyline of A Song of Ice and Fire decisively, that will be a great achievement, but a filler-filled book will be less popular. I guess in 104 days, we'll find out for sure.
Posted by Adam Whitehead at 20:04

So I drag out my marvelous book stand, a gift from the gracious Parris long ago, because my wrists sure won't be happy holding it up for more than 5 minutes at a time. LOL

I think I'm going to have to find a coles notes on the previous books; it has been so long, and there's no way I'm re-reading all of them in preparation.

Mr. Whitehead, your blog would be worth reading for the headers and "explaining lines" of the illustrations alone! ;-)

Of course, the rest is just as spectacular - no, MORE spectacular. Which is why you were nominated for a blogger's award (http://thewertzone.blogspot.com/2011/03/wertzone-is-up-for-sfx-award.html ).

ooh, it's supposed to come out on my birthday! happy birthday to me!

and I wonder how many hours long the audio version will be. . . .

My main concern is that there will be too many pages about Dany ruling Meereen before any characters from Westeros get there, and without getting any closer to invading Westeros. It would be easy to have that drag on I think.

More and more, the issue of book size is becoming moot to me. I hate to admit this, but I'm quite addicted to buying digital books for my Kindle app (on my iPad), so book length means little to me anymore. I have a ridiculously large library of books under my arm everywhere I go now. So I say, at least in this case, "Add as many pages as you want to, GRRM! I'mma read'em all!"

All the more reason to buy it in EBook format.

I've got a first print of To Green Angel Tower in hardback (UK version) and you just don't see the quality of binding and the rest of what goes into a book nowadays. Best quality book I've got :)

Personally, I look forward to exercising my muscles with Dance this summer!

ASOIAF is definitely one of the truly good fantasy series out there, but it has always had a huge amount of padding.

IMHO Storm of Swords, which is 1/3 longer than Game of Thrones , has about the same amount of plot movement, maybe even a bit less than GOT.

AFFC is a 1104 pages long, a huge book by anyone’s standard, but doesn’t have much movement at all in my opinion.

Hopefully ADWD dragons will be great, but the page count certainly doesn’t signify how good the book will be. The idea that an editor wont get the time to take a good look at the book as a whole is really, really troubling.

AFFC is a ludicrously large size in paperback. It's almost like one of those books with text to help the blind, the font is so big. Just completely unnecessary.

ACoK in the UK paperback goes the other way though. Whilst it's nice it's quite short (800 pages) the font size is so small it's uncomfortable to read.

i also think that GRRM started getting too "in love" with his universe from book 3 on - books 1 and 2 are among my all time fantasies, but 3 and 4 are of the "superb moments but so much filler" kind, like the recent Rothfuss or Sanderson - but in defense to editors I think that in this case as opposed to the two above I mentioned where editing would have done wonders, there is no way anyone can change a comma in the books if GRRM does not approve it...

I second what Liviu said, although I still love the series.

My biggest concern is as well that the publishers won't have enough time to decently edit the book - and whenever such a thing happened in the past, in most cases the result turned out to be not as good as it would have been, had a good editor put his/her hands on it...

The lack of plot movement given the size of the later books was one of my wife's major complaints and one of the reasons she ultimately abandoned the series. here's hoping ADWD will move things along.

After reading the previous comments I begin to worry whether the really tight deadline might not be a little too tight.
Given the long wait a couple of weeks wouldn't really matter anymore but might indeed be necessary for a healthy editing process.

GRRM's publishers had about three-quarters of the manuscript by the end of last year (some parts for much longer) and that material has already gone through the full editing process (my understanding is that this material is now considered 'locked' and GRRM can't fiddle with it unless a book-destroying problem is discovered).

As of right now, the edited and locked material is well north of 95% of the complete book, so when GRRM 'finishes' the book, it's just the last few chapters which need editing, not the whole behemoth.

Finally Mr Martin!Felt a bit let down by Feast for Crows,especially as imho the best character,Tyrion doesn't appear yet,also by the extraneous sub-plots.Still new ASOIF is an event.

I guess you don't speak french but today i found this article which is approximately a translation of yours but they don't even bother to quote you.
Maybe you knew already but just so you know
http://www.fantasy.fr/articles/view/16421/a-dance-with-dragons-pourra-t-il-sortir-en-1-seul-tome

Interesting, they're splitting the book in three in France and...hang on.