Paul Kearney's Sea-Beggars series got off to a roaring start in 2004 with the excellent The Mark of Ran, followed up by its sequel This Forsaken Earth in 2006. Unexpectedly, Bantam abruptly dropped the series, leaving Kearney briefly publisher-less before he was rescued by Solaris. 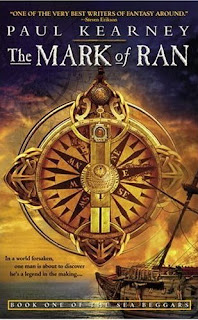 Unfortunately, Bantam UK held onto the rights to the Sea-Beggars series, preventing Kearney from completing the final book in the series, Storm of the Dead. He went on to write the well-received Macht trilogy (The Ten Thousand, Corvus and the forthcoming Kings of Morning) whilst the rights situation was thrashed out behind the scenes.

Happily, the situation has now been resolved. Solaris have acquired the rights to both the existing books and Storm of the Dead and will publish all three books in one omnibus volume in late 2012.

Jonathan Oliver, commissioning editor of Solaris Books, has acquired UK/US rights in the two previously-published SEA BEGGARS novels by Paul Kearney plus a third and final volume, STORM OF THE DEAD. They will be published in a one-volume omnibus, following the success of Kearney’s MONARCHIES OF GOD books in this form with Solaris (who also publish his Macht novels, THE TEN THOUSAND, CORVUS and the forthcoming KINGS OF MORNING). The book is due for publication late in 2012, and the agent was John Jarrold.

"Paul and I are both delighted that this series will be completed and published in its entirety by Solaris," said John Jarrold. "He is a major talent and anyone reading this or his other novels will see that very quickly."

"It’s a great pleasure to welcome Paul back to Solaris," editor-in-chief, Jonathan Oliver, said. "Fans of Paul’s will be delighted that the SEA BEGGARS series is finally seeing completion and new readers will be bowled over by the work of this brilliant and intelligent fantasy writer."

Excellent news for Paul and his fans, who'll finally be able to found out what happened to Rol Cortishane and his allies following the cliffhanger ending to This Forsaken Earth.
Posted by Adam Whitehead at 19:32

Email ThisBlogThis!Share to TwitterShare to FacebookShare to Pinterest
Labels: paul kearney, sea beggars, storm of the dead, the mark of ran, this forsaken earth

Will the series be complete with that book? I thought Sea Beggars was supposed to have four books...

I'd have to ask Paul, but I believe what's happened is that STORM OF THE DEAD now contains the material originally planned for Books 3-4. Whether that's cut down to the size of one book or it's one book which is now twice the size is unclear.

great news Adam ! thanks for posting.

Brilliant! Loved the Monarchies of God & The Ten Thousand, waiting for MMPB of Corvus and will definitely grab this omnibus. A very under appreciated writer who deserves many more sales than he gets.

That's good news. I loved the first book, liked the second, and could never figure out why there weren't any more. Thanks for the update!

Very awesome news. I've been hoping this series would get a second life after Bantam dropped the series. That's gonna be one sweet omnibus volume.

As far as I know, CORVUS is only available in mmpb or ebook. I haven't seen hardcover or tradeback editions. So you should be able to get it now.

Why on earth did Bantam act the way they did?

Urgh! Had no idea, going to grab it right now off BookDep.

good news indeed. haven't been impressed much with solaris' output (despite me wanting to) but their support of paul kearney is tops for me. at the very least, all of kearney's omnibus works in solaris will look good in any bookshelf.

About TIME! I really loved those first two books when I read them.

But now it's been so long, I've forgotten most of what happened to the characters.