Final cover art for the American ICE AND FIRE reissues

Bantam Spectra have released the finalised cover art for their new paperback and tradeback editions of A Song of Ice and Fire. As mentioned previously, this is the Larry Rostant art used on the current UK editions of the books, with some changes (A Game of Thrones has the cover from the UK A Dance with Dragons). The final covers differ from the drafts I've posted previously only in emphasising the HBO tie-in banner a bit more and changing the background colours on the first two books. 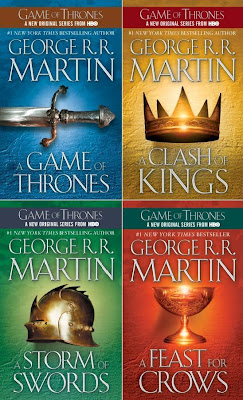 The new editions should hit American bookstores on 22 March, along with a special HBO tie-in edition of A Game of Thrones in tradeback and paperback (we're still waiting for the final version of that).

In the UK, Voyager have no plans to revise their artwork, I am informed, though the HBO tie-in edition will also be released (in a new typeset) here, possibly not until a week after the US.

EDIT: I've been told the new editions have already hit some bookstores in the USA and Canada already.

EDIT2: Winter is Coming has discovered the apparent final version of the HBO tie-in cover.

EDIT3: Sub Press are reprinting the first two limited editions of A Song of Ice and Fire (previously handled by Meisha Merlin before they imploded) and also have 30 completed pieces of art for A Dance with Dragons. There's just a couple more which will need to be inserted once they have the final manuscript, then they can move into production. So the limited ADWD should be available soon-ish after the regular edition.
Posted by Adam Whitehead at 15:38

Cool, I especially like the blue on AGoT. Not a fan of the banners but I understand why they need to be there.

I guess the hardcovers won't be changing...which is good but ADWD doesn't really match the first 4 US hardcover editions. That green one they scrapped about 4 years ago did though.

I've already seen them in stores here in Canada. I must admit, they look really sharp compared to the previous covers.

Yeah, they've had these at my bookstore for a week or so now. I like them, and they even re-issued the full size Trade Paperback of the TGOT one...I haven't decided yet whether I ought to replace my (now very) mismatched ASOIAF set...

I have a hardback ARC of AGOT with the spikey throne on the cover, two full size trade PB's (ACOK and ASOS) with the old medieval-ey art on the covers, and the AFFC one that is uber lame red with the crow on it.

Sigh. the new covers have taste though, so I dunno.

I believe the silver Iron Throne cover of AGoT is worth a small fortune these days.

So is Sub Press selling their special eds to the people who already own the Meisha Merlin ones? I sold my two MM ones to some dude in the US a few years ago - needed the money and was mega pissed off at how shitty MM were during the entire process.

Anyway, good luck to those who buy them, they will certainly nice books.

Does anybody know anything about the special hardcover edition that HarperCollins are realasing in July?