It is 1348 and the Black Death is sweeping the English countryside, killing tens of thousands. A young monk, Osmund, has fallen in love with a young girl who has taken refuge in his monastery. His actions lead him to joining a band of the King's men, led by the knight Ulric, on a mission to find a marshland village reputed to be in the grip of witchcraft. Along the way, he hopes to break off and run away with his love. But in the woodlands he finds himself drawn onto a far darker and crueler path. 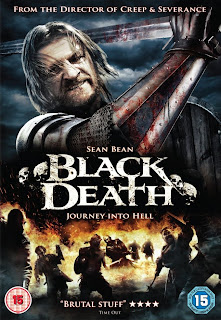 Black Death is a relatively low-budget movie financed and made in Germany, although the film is in English and has a mostly British cast. It stars Sean Bean as Ulric and Eddie Redmayne - the main character in the recent adaptation of Pillars of the Earth - as Osmund, with veteran actors David Warner (too many roles to list) and Tim McInnery (Blackadder) in support, along with rising star Carice van Houten (noted for recent roles in Black Book, Valkyrie and Repo Men). A bunch of solid supporting actors such as Emun Elliott (soon to be seen in Game of Thrones, along with Bean) and John Lynch (Merlin's father in the BBC series of the same name) line out the relatively small cast.

Given this is a small-budget movie with Sean Bean wearing armour and swinging a sword, the first impression is of a cheesy action flick. Nothing could be further from the truth. Black Death is a surprisingly bleak and dark movie about faith, power and fundamentalism. Sean Bean's Ulric is a far, far cry from his other heroic roles or his out-and-out villains. Instead he's a God-fearing knight who believes absolutely that the Black Death is God's punishment of humanity for its sins. He's a brave and capable warrior, but also utterly unrelenting and ruthless in his quest, capable of killing anyone who gets in his way. Redmayne's Osmund is idealistic and hopeful, shocked by the viciousness of the world and the perchance for violence demonstrated by his new associates.

The film unexpectedly moves into Wicker Man territory when our protagonists reach the supposedly witch-infested town and become engaged in a struggle of faith, reason and power. McInnery is cast against type as the the town headman, with Van Houten as the woman who has brought hope to it. Van Houten is a little too obviously villainous from the off, but her contempt of those who slavishly believe whatever they are told is well-played.

The director, Christopher Smith (best-known for Severance), seems to be aware of the potential for sniggering comparisons to Monty Python and the Holy Grail and with Blackadder, so tackles them head-on. McInnery's casting is possibly one allusion to this, whilst the scene with the monks flagellating themselves as they walk along seems to be a very overt reference to the Grail. Beyond these nods, there is little humour in the film, especially once it moves into its final, dark act.

The film's biggest weakness is that the supposedly wordly wise knights fall a little to easily into a certain and very obvious trap, and whilst the film's focus is commendable in an age of bloated 3D monsters, some side-elements and secondary characters could have done with a bit more fleshing out.

The film's ending is a startling, expectation-destroying sequence. Initially it appears to render the entire film pointless, but on further reflection it raises further questions over corruption and fundamentalism that are surprisingly effective.

Black Death (****) is a dark, bleak and occasionally powerful movie which poses hard questions of its audience. A sometimes uncomfortable watch, this is a far more intelligent and interesting movie than it looks like on first glance. It is available now in the UK (DVD, Blu-Ray) and, on Region 2 import only, USA (DVD, Blu-Ray).
Posted by Adam Whitehead at 15:23

I agree, I "enjoyed" (if that word can be used)this movie thoroughly and admired the twists and the shock the brutal violence brought to this film. Osmund's character becomes infinitely more interesting after the climax. I would love to see a follow up film on his path revealed in the conclusion of the movie. Complex characters thrown into an unsettling situation. Not for everybody, but I rank it as a hidden gem. So black and bleak it cuts the soul.

I really enjoyed this film. It is getting great reviews so far here in the states. It's having a limited screening (mostly indy type theaters) in a handful of cities starting this month....

I must admit your review has some what diminished my interest in seeing this film. It almost sounds like its a slightly less boring "Valhalla Rising"...

I found this movie really bland. Even Sean Bean's performance seemed called in. Entertaining for 2hrs but once it's over you will forget it.