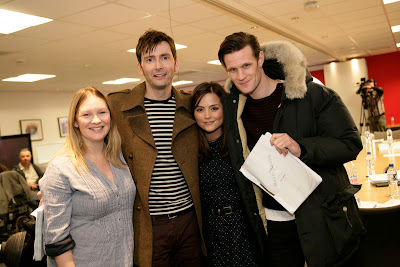 Joanna Page (playing a guest character), David Tennant, Jenna-Louise Coleman and Matt Smith at the script read-through for the special.

The BBC has concluded complex negotiations which will allow the episode to be screened simultaneously alongside its UK broadcast (likely to be around 7pm). Aside from a few live sporting events, this is likely to be biggest global simulcast ever, certainly for a drama show. The episode will also be aired in 3D and will be shown in selected cinemas worldwide, although the details of that have not been revealed yet.

The episode will see the Eleventh Doctor (Matt Smith in his penultimate adventure) and Clara Osborne (Jenna Louise Coleman) joining forces with the Tenth Doctor (David Tennant) and Rose Tyler (Billie Piper) to confront the menace of the Zygons. John Hurt will also star as a hitherto-unknown 'version' of the Doctor, although what exactly that means remains to be seen. A trailer shown only at Comic-Con hints that other enemies and familiar faces may also put in cameo appearances.
Posted by Adam Whitehead at 15:34

Oh wow! This will be amazing!!

If only they could do that with HBO shows. ;)

I tried watching one of the recent Dr Who eps but just couldn't get through it. Something about the acting was a bit goofy for my tastes. Not for me I guess. =/

I SO hope that it gets a theater release in the U. S. Seeing Doctor Who on the big screen would be AWESOME!

I wonder what's going to happen regarding commercials, though. In the U. S. the show airs on BBC America, with a commercial break every seven or eight minutes. I tend to buy downloads of the episodes the next day because I think that commercials really ruin the momentum of the show, but if it's being simulcast, I don't see how they can air commercials while maintaining the simulcast.