The SF of Gaming

Where would computer games be without science fiction? Alien bad guys, stonking great railguns, cyborg protagonists and post-apocalyptic landscapes are ten-a-penny in games. The number of games out there without any SF or fantasy elements is tiny; even the historical simulation Civilization games allows Gandhi to build an army of death-dealing laser tanks and then fly to Alpha Centauri, whilst the Crusader Kings series postulates fantastical alternate timelines where Wales is a European superpower. 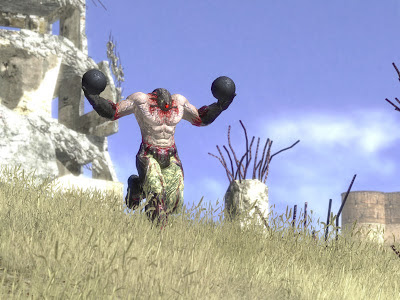 That said, SF in games is usually scenery rather than the focus of the setting. The socio-economic basis of why the alien Lord Mental, with access to vast resources and commanding a star-spanning empire, needs to invade Earth in the Serious Sam series remains resolutely unexplored. And how do those suicide bomber guys scream when they don't have a head anyway? The science in science fiction is often questionable in books (and almost non-existent on TV and in film), and even moreso in games.

Still, exceptions exist. Here's a look at some games which attempt to use real science as more than just wallpaper. 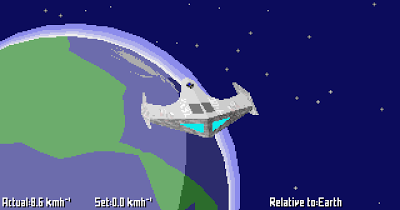 Released in 1993, Frontier was David Braben's ambitious follow-up to the classic, medium-defining 1984 space sim Elite. Frontier allows you to take on the role of the captain of a spacecraft. You can indulge in trading goods between star systems, fighting pirates (or turning pirate yourself) or undertaking missions for one of several interstellar powers (the Federation, the Empire or numerous independent worlds, as well as various corporations). You can switch between spacecraft and upgrade them.

Where the game was truly stunning was that it simulated the entire Milky Way Galaxy on just a single floppy disk. 100 billion stars were located in the galaxy, and the several hundred closest to Earth were placed in their (more or less) correct astronomical positions, along with a few hundred other major stars. You could fly to the Pleiades (though it'd take a while), check out Polaris or skim the surface of Arcturus. The game also used real Newtonian physics, complete with effectively infinite inertia once you had fired your engines in a particular direction, and space stations simulating gravity through centrifugal force. You could even fly over planetary surfaces and land at starports.

Of course, the game looks pretty primitive by modern standards, 99% of the stars in the game are randomly placed and named and the Newtonian physics make space combat unintuitive and almost ridiculously difficult to pull off (and the fact that few later space games - I-War and Tachyon's nods to it side - use real physics may be down to Frontier's problems). But the ambition and scope are there. It will be interesting to see if Elite: Dangerous, due in 2014, manages to solve the issues whilst retaining the immense scale, scope and ambition of its forebear.

Predating Frontier by a few years, Damocles similarly depicts an impressive 3D universe which allows you to land and take off from planets. The setting is much more limited, with just a single solar system on offer. The spacecraft is also merely a way of getting from planet to planet, with the focus being on your character wandering around (in first-person 3D; a stunning achievement in 1990). The premise is that the comet Damocles is about to crash into and destroy the planet Eris and your character has to find a way of stopping it. The game presents several possibilities, from the direct (finding and blowing up the comet with a mega-powerful antimatter bomb) to the sensible (redirecting the comet away from Eris onto a safer orbit by blowing up another, uninhabited body nearby).

One of the more interesting things about the game is that your spacecraft can accelerate to near-lightspeed to get around the system, but this results in time dilation. You can travel right across the system in minutes, but the doomsday clock will tick down at a ridiculous rate. This forces the player to find alternate ways of travelling around (teleporters being the favourite alternative, but their locations are unknown at the start of the game) to avoid the problem.

Also released in 1993, Syndicate was an action-strategy game set in a dystopian cyberpunk future, where the world is controlled by corporations who influence and pacify citizens via chips in their brains. These chips can be subverted by the player, allowing them to take control of huge crowds of people during missions to be used as cannon fodder or a distraction. This notion of human/computer interfaces is only lightly touched upon in the game due to control limitations, although it does bring in other SF ideas such as robot policemen and massive corporate advertising boards (influenced by Blade Runner). Most sinister is the way the game postulates a future where governments are rump states at best, with the real power held by corporations and their private armies.

A sequel, Syndicate Wars, moved the game into 3D in 1996. Recently, several of the design team for Syndicate and its sequel announced a Kickstarter campaign for a 'spiritual sequel', Satellite Reign, that will expand upon many of the ideas in the original game and allow for things like hacking and more freeform approaches to missions. 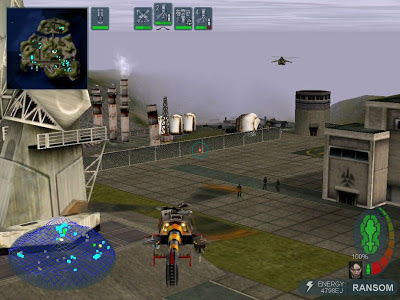 One of the greatest (though also underplayed) strategy games of all time, Hostile Waters (aka Antaeus Rising in the USA) places you in command of an immense aircraft carrier with orders to liberate a chain of newly-risen islands from the control of a hostile power. What at first appears to be a remake of the classic 1987 strategy title Carrier Command (itself given a lacklustre, official remake in 2012) quickly turns into a different beast. Part of this is down to the compelling fiction, created by writer Warren Ellis.

The game postulates a technological singularity (in 2012) which comes to pass due to the invention of Creation Engines, devices which use nanotechnology to break items apart and reassemble them at a molecular level. Anything can be turned into anything else. Rubbish can be transformed into food, sand into diamonds. This immediately removes scarcity - famine, lack of resources - as an issue for everyone on the planet and would seem to herald a golden age. The owners of the means of production, who are effectively out of a job, resist by trying to regulate the introduction of Creation Engines, resulting in a messy, bloody global civil war. At the end of the war the 'old guard' are defeated and everyone lives in a world of plenty. Needless to say, some of these old guard launch a new assault using weaponised Creation Engine technology...technology which gets out of hand very rapidly.

Dealing with SF hot topics like nanotechnology, the Singularity (not exactly in a robust way, though, as the post-2012 society is still pretty comprehensible to us), life-extension via 'saving' consciousness on AI systems, the conflicts of closed systems versus open ones and ideology versus religion, the game's storyline is surprisingly deep though arguably flawed: the world also being a secularist paradise with billions of people abandoning religion seems a bit far-fetched, though there are hints that the new society has a sinister side as well. All the more remarkable is that this background is there purely to explain the game's use of standard strategy tropes, like being able to build vehicles instantly on the battlefield. The fiction is impressive and well-thought-out, complementing the amazing gameplay very well. 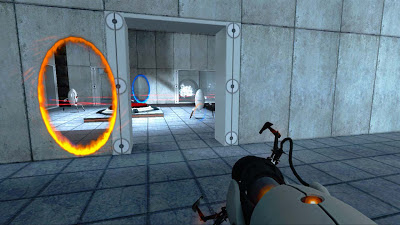 Released in 2007, Portal was a small game but a hugely influential one. The game is based around the idea that you can create two linked dimensional portals on certain surfaces, allowing for intelligent ways to solve apparently insurmountable puzzles. Jumping across a vast chasm is possible by creating a portal on the wall behind you and another at the bottom of the chasm: falling into the chasm builds up enough momentum to shoot through the portal, over the top of the chasm and landing safely on the other side.

The portal technology is of course highly speculative, but it's a rare example of a gaming taking its central scientific/technological premise (no matter how ludicrous) and exploring it intelligently. The 'science!' theme, the impressive AI antagonist, the game's remarkable sense of humour and it's bigger, better sequel all help cement the game's reputation as one of the finest first-person action games in existence. 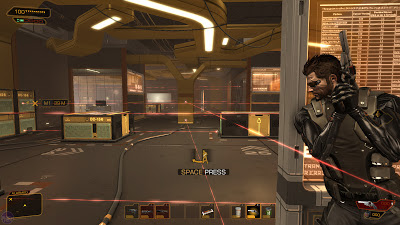 This prequel to 2000's classic Deus Ex deals with a number of important near-future issues. As well as the standard cyberpunk government/corporation tension, the game explores the theme of augmentation and using technology to enhance human abilities in depth and with intelligence. The notion of how much of our bodies we can replace and remain human is also a key theme: does the corporation 'own' protagonist Adam Jensen because they paid for the augmentations that allow him to live? A rich and involving game (let down a little by silly boss fights).

BioShock Infinite - An Infinity of Possibilities 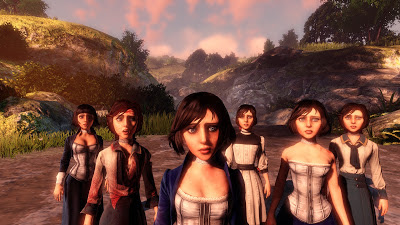 This recent game is set in an alternate timeline in which a huge flying city called Columbia was built in the early 20th Century thanks to the invention of quantum engines, technology that never existed in our world. As the game progresses, the protagonist and the girl he was sent to save find themselves passing through tears in the fabric of reality into other universes, including some similar to our own and others completely different.

The 'many worlds' theory of quantum reality is a common theme in modern SF, but this is the first time a game successfully explores the same theme with some intelligence and uses it to tie together the disjointed narrative in a manner which makes sense. 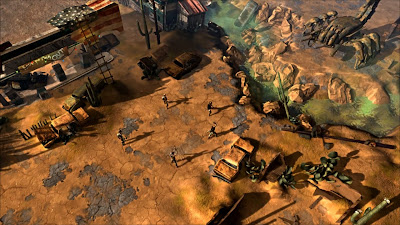 The upcoming Wasteland 2, from some of the same team that gave us the Fallout games, is a post-apocalyptic romp which makes few pretences towards scientific realism in its backstory or how anyone survived the nuclear apocalypse. However, the developers have called upon the services of real scientists to help portray environments and creatures, leading to the creation of the fearful giant hermit crab, which hides within the shells of abandoned and burned-out cars and gives the players a nasty surprise when they wander by.

As we can see, there are a few games around which do make more use of science and real SF ideas than as just a cheesy explanation for insane ultraviolence. Hopefully this is something we will see more of in the future.

See also: Polygon has interviews with the scientists who have consulted and advised on games such as Wasteland 2, BioShock Infinite, Deus Ex: Human Revolution and the upcoming Outlast.
Posted by Adam Whitehead at 15:14

One game that impressed me in this regard is Alien Legacy (1994), mostly because of how it simulates an entire solar system, the movement of planets and moons in particular. This results in realistic and very long traveling times to the outer planets if their orbit at a particular time puts them at the other end of the system from where a ship starts. I don't think time dilation is simulated, though.
Also, the game's research/tech tree is very much hard SF. An FTL drive is developed, but only at the very end, the crowning achievement of centuries of research.

Another space simulation game to keep an eye on is Kerbal Space Program which uses physics to simulate modern-era rocketry. Makes you deeply appreciate what the Apollo program accomplished.