Midkemia: The Chronicles of Pug by Raymond E. Feist and Stephen Abrams

Earlier this year, Raymond E. Feist concluded his Riftwar Cycle of epic fantasy novels. The sequence that began in 1982 with the publication of Magician concluded with Magician's End, resulting in a massive series consisting of thirty novels spread over ten sub-series. Six of the novels were co-written with other authors, but the rest are solely by Feist. However, it's less well-known that the world of Midkemia is not Feist's creation, instead being conceived by Stephen Abrams. Abrams and Feist attended the University of San Diego together in the 1970s and Abrams created the world for use in roleplaying games. Feist later (with Abrams's permission) used the setting for his novels, fleshing it out further. 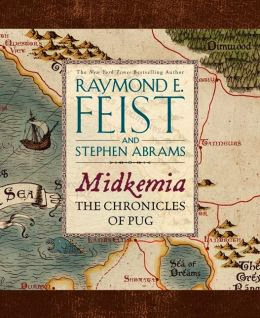 Thirty-five years later, Feist and Abrams have regrouped to deliver a companion book to The Riftwar Cycle, featuring maps, artwork and further information on the world of Midkemia not given out in the novels. Whilst I haven't followed the later Riftwar novels (I bowed out after the quite amazingly boring Talon the Silver Hawk), I did enjoy the early ones and particularly liked the worldbuilding (haphazard as it was) depicted in the books and the spin-off computer games (Betrayal at Krondor and Return to Krondor), so I was looking forward to seeing that background fleshed out.

I was disappointed. As a companion book, Midkemia: The Chronicles of Pug is sorely lacking in almost every department. The first thing that grates is a lack of proof-reading: the book is riddled with spelling errors on both the maps and in the text (Shamata is frequently rendered as 'Shomata', whilst 'Murmandamus' is spelt in several different ways depending on the writer's whim of the moment). The maps are pretty, but difficult to use. The fonts render many names difficult to read and the artist seems to frequently get bored and only fill in the trees around the edges of the forests, making it look like Midkemia's woodlands are all plains surrounded by a ring of trees. Also - though this is a long-standing problem from the book maps as well - the mountains are depicted as quite ludicrously-sized given the scale used. The continent of Novindus continues to look like a small island instead of a huge landmass. There is also a discrepancy between the size of the Empire of Great Kesh on the maps and its reported size in the books (several times that of the Kingdom, whilst the maps show it as roughly the same size), and contradictory statements in the book which say that Kesh is sparsely-populated with the cities separated by vast gulfs of wasteland, whilst the novels report that Kesh has many times the population of the Kingdom. There's also the problem of the maps featuring locations that don't actually exist when the map was supposedly made: Port Vykor (or Vikor, as the maps never seem to agree on a spelling), founded after Rage of a Demon King, is shown on maps pre-dating Magician, more than fifty years earlier. Oh yes, and there's supposed to be two world maps of Midkemia, showing the state of the world at the start of Magician and after Magician's End (both visible on various fansites promoting the book) but only one of the two world maps is actually in the book. The other one seems to have simply been forgotten. This is made more amusing by the surviving book having 'MAP II (2)' written on it with 'MAP I (1)' nowhere to be found (in the UK first edition, it should be noted).

Then there's the actual text itself. Those expecting a book which talks about geography, history, society, customs, cultures and so on will be in for disappointment. The text is a fairly basic plot summary of the events of The Riftwar Cycle. Sidebars and illustrations show there is some potential in this approach: a map of Sorcerer's Isle appears at the relevant point in the text, followed by maps of the Sunset Islands when they first appear and so on. Occasionally the summary of plot elements the reader is probably already familiar with is interrupted by a little bit of background information on politics or culture, but such moments are rare and fleeting. The depth and usefulness of the plot summary amusingly mirrors the general consensus of the quality of the books: the events of Magician are covered in substantial depth, then Silverthorn through Rage of a Demon King in somewhat less detail, and then all of the books afterwards (which is almost two-thirds of them) are covered in just a few pages of confusingly repeated names and events which sound generic to the point of painfulness (having bailed out after Talon of the Silver Hawk, I see I'm not missing very much).

Only one of these maps is actually in the book. Oops.

The book is accompanied by artwork from Steve Stone. These aren't actual illustrations, however, but rather stiff and unconvincing 'photo art' featuring posed models in front of CG backgrounds. Occasionally this is effective (Amos Trask's ship running the Straits of Darkness is pretty good) but most of the time it's awful, not helped by occasional re-use of the same model to depict completely different characters.

There are moments when the book comes to life: the opening couple of chapters feel more inspired and some of the maps expanding on the somewhat-confused geography of Silverthorn and A Darkness at Sethanon are genuinely useful. Occasional bursts of background material hint at much more interesting detail. Getting 'canon' maps of the Keshian Confederacy and the full Empire is also gratifying (though it turns out they are pretty much the same as the ones that have been available on the Elvandar website for many years). But ultimately this is a companion book which tells us almost nothing about the history, chronology, societies and cultures of the world it's named after, which is a baffling choice.

Midkemia: The Chronicles of Pug (**) is a disappointing volume, featuring almost none of the information that I suspect readers will really be interested in or expecting. Instead, it's an unproofed plot summary of books they've already read, interspersed with bad artwork, ill-detailed maps and an astonishing number of spelling mistakes. There are a few, scant interesting nuggets of new information to be found and some maps that helpfully clarify confusing descriptions in the books, but beyond that this book is not really that useful. One for die-hard fans and completists only. The book is available now in the UK and USA.
Posted by Adam Whitehead at 12:04

That's a shame. I was curious to see what Abrams had to say about what Feist did with the world he created, but this almost sounds like a haphazard fan project.

This is disappointing but unsurprising. With the exception of Tolkien-related books, I have yet to encounter a companion volume to a fantasy series that was worth the money I paid for it.

I remember being extremely disappointed in the Wheel of Time companion book. Not only was it released prematurely (aside from capitalizing on popularity and making a profit, I've never understood why anyone would want to release a companion book before a series is finished--it doesn't make any sense), but the artwork was absolutely horrible and it didn't really add anything interesting to what was already available in the books themselves.

I hope that the time that George Martin has reportedly been spending on the World of ASOIAF book is time well spent, though I think he'll still run into the inevitable problem of being constrained by the fact that he hasn't finished the story. At least he has a lot of history and new content to include in it, unlike most of the others out there.

Personally, when it comes to artwork, I'd rather have no artwork than bad artwork (the World of WoT artwork is laughably bad). It seems to me publishers would be better off licensing fan artwork from deviantArt than paying some professional to slap together some shoddy photoshop work.

Sounds dreadful. So why two stars? Call it what it is: a One Star Wonder.

You mentioned the first volume 'Magician' is worth reading. I'd be interested in how far in the series you'd recommend reading as I've never read the series. Or should I just not bother at all?

I have read every one of Feist's novels. I've been hooked from the start. He was unable, in his laters novels, to capture the brilliance of his earliest stories.

Yeah, I'd read the original RIFTWAY CYCLE (MAGICIAN, SILVERTHORN, A DARKNESS AT SETHANON), the stand-alones PRINCE OF THE BLOOD and THE KING'S BUCCANEER, the EMPIRE TRILOGY (DAUGHTER OF THE EMPIRE, SERVANT OF THE EMPIRE, MISTRESS OF THE EMPIRE) and the first three SERPENTWAR SAGA books (SHADOW OF A DARK QUEEN, RISE OF A MERCHANT PRINCE and RAGE OF A DEMON KING). After that point the series drops off a cliff in quality and never recovers.

It doesn't exactly shock me that this book is poor quality. I got the feeling around the time of the fourth Serpentwar book that Feist just wasn't trying any more, and nothing I read from him after that changed my opinion. It's a shame, I really enjoyed the earlier books.