Earnest "Earn" Marks is a man who feels his life is drifting aimlessly, with an unrewarding job and difficulties in supporting his young daughter and his on-off again girlfriend Van. When his cousin Alfred starts a rapping career under the stage name "Paper Boi", Earn convinces him to take him on as his manager. And then life gets even more complicated. 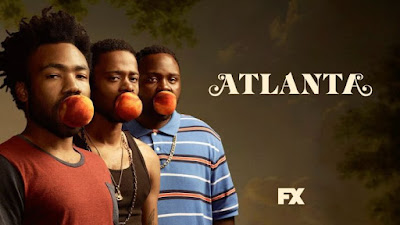 Atlanta is a very hard TV show to pin down. Created and partly written by Donald Glover (Community, Star Wars: Solo), who also stars as Earn, it's a strange show that moves between different tones with assured ease. It's a comedy about an intelligent young man who constantly feels let down by society and his idiotic peers, but who also makes plenty of his own mistakes. But it can also go quite dark: the first two episodes see Alfred shooting a man after a parking lot altercation and both him and Earn ending up in the police station, where Earn endures a stark and uncomfortable night alongside drug-dealers, violent criminals and brutal cops.

Later episodes go out-and-out surreal. An entire episode is spent with Alfred as a guest on a strange Atlanta talk show, whilst another is set in a nightclub with secret doors and a lunatic rich guy who apparently drives an invisible car. Another episode revolves entirely around a search for a missing jacket, and another feels like the prototype for the movie Get Out, with Earn enduring the increasingly disturbing attention of a middle-aged white man who is crawling with inappropriately over-earnest guilt for slavery (co-star Lakeith Stanfield also has a prominent role in Get Out, which feels appropriate).

Atlanta is weird and fluid, flowing from being a show about one thing into a show about another. At first it's difficult to know if you even like the show or not: is it a comedy? A drama? A surrealistic visual tone poem? But the final analysis is that Atlanta is meant to represent Earn's life, which for all of its specific elements is a life pretty much like anyone else's, which moves from being funny to sad to being busy to being boring and back again.

What Atlanta remains throughout, however, is both entertaining and compelling. The direction (some of it by Glover himself) is remarkable, drawing the viewer into each episode's unique set-up. The writing is always sharp, the dialogue often joyously clever (especially when Earn gets up to speed and starts cutting down other people's idiocies with withering contempt), the characters immensely interesting even when they're not the most likeable. Earn may be (most of the time) our viewpoint character, but it's his long-suffering sort-of girlfriend Vanessa (an assured performance by Zazie Beetz) who emerges as one of the strongest characters, someone with drive and ambition but lacking the resources to fully achieve her goals.

Atlanta may not always be a comedy (despite its billing as a comedy-drama), but when it is it's the funniest show on television. Lakeith Stanfield's performance as philosopher-stoner Darius, master of the non sequitur, provides some of the show's best moments, but all of the cast have their moment in the sun.

Atlanta's first season (****½) is smart, engaging and endlessly inventive television. A second season aired earlier this year and a third season has been commissioned.
Posted by Adam Whitehead at 22:16