Earth has just discovered that it is not alone in the universe. There's a multitude of alien races out there, not all of them very nice, and they recently only just avoided annihilating one another in the Sentience Wars, a conflict driven over what races were and were not intelligent. To replace interstellar warfare, they have introduced the Metagalactic Grand Prix, essentially a world-spanning singing contest. In order to prove itself worthy, Earth must send its finest musical artists to literally sing for the planet's survival. Unfortunately, the only artists acceptable to the aliens are washed-up has-been Decibel Jones and Oort St. Ultraviolet, whose brief superstardom years earlier has left both of them in very different conditions. To save the world, they have to put the band back together. 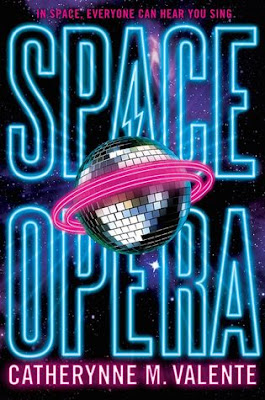 Space Opera is a comic SF novel written by Catherynne M. Valente, inspired by Douglas Adams and the Eurovision Song Contest, that kitsch and silly musical talent show which has replaced armoured warfare as the primary means of measuring international competition on the European continent. As the book is careful to make clear, this means it should be zany, crazy, neon-drenched, glitterball-kicking fun. And to be fair, Catherynne M. Valente has a go. There's a lot of invention in this novel, various original alien species and entertainingly bananas planets that are described with inventive glee.

The problem is that the book tells you it's going to be crazy fun, but never really kicks off into being zany fun on its own merits. It also tells you that it's inspired by Douglas Adams but doesn't really learn any of the lessons of Adams' work, which is centred in a dry wit, and a lot of English restraint which occasionally cuts loose in bananas set pieces which will leave you giggling in your chair like a loon. Instead, Space Opera has to settle for generating the occasional wry smile.

The book is oddly structured. At 290 pages of both large and very well-spaced type, it's very short (which is good, as the premise is too thin to support a prolonged narrative) but bizarrely lopsided. Approximately the first 200 pages of the book are dedicated to lengthy profiles of each alien race, the history of their worlds and the history of the Metagalactic Grand Prix. We're also introduced to our two protagonists and a couple of other alien characters, who explain the situation and travel to the planet where the Grand Prix is being hosted and, er, that's it. The actual plot of the book is rounded off in a mere 90 pages, the bulk of which is taken up by a drinks reception. The actual singing competition is over in a just a few pages. A compelling narrative this does not make.

The writing is meant to be witty and funny, but this is made difficult by the book being almost entirely written in long paragraphs, run-on sentences and an inventive but nonstandard use of commas (i.e. mostly forgetting there is any such thing as commas). It feels like this book should have been written in shorter bursts which made its points more succinctly. As it stands, despite the book's short length, reading it and parsing the enormous blocks of text feels like far more work than it should be for a book that is, by design, supposed to be short, zany and disposable fun.

The character work is fine, by which I mean protagonist Decibel Jones is a monumental tool it's hard to have much time for, but Oort St. Ultraviolet is a well-motivated fellow and we get some well-defined band dynamics. Mira is by far the most interesting character in the book, but gets the least amount of development by dint of having died some time before it starts. The story is okay, but so extremely brief that I wonder if this was originally supposed to be a short story and was padded out to novel length for commercial reasons.

A fairly major problem for the well-read SF and fantasy fan will be the nagging feeling this has been done before, and much better: Terry Pratchett's Soul Music and Robert Rankin's The Da-Da-De-Da-Da Code are both amusing and finely readable musical-influenced genre novels (although neither are the author's best). In fact, I kept wondering what madcap monk-genius Rankin would have made of this premise on one of his good days. I suspect it would have been a lot more entertaining. Rick and Morty also produced a reasonably entertaining episode with a similar premise a couple of years back, which was fine (although again not one of the show's best).

Space Opera (**½) is a weirdly-paced, oddly-structured novel which is nowhere near as amusing as it wants to be, manages to raise a few laughs here and there, but is also overwritten and overwrought with a thin story. A quintessentially non-essential read. The novel is available now in the UK and USA.
Posted by Adam Whitehead at 18:07

Jack Vance also has a book called "Space Opera". It is about an opera company touring in space.