Babylon 5 arrives on Amazon Prime in the United States as of today! You can watch the entire series right now for free if you're an Amazon Prime customer. 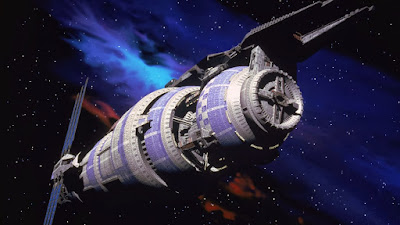 There are a few caveats. Amazon Prime's deal only includes the pilot movie, The Gathering, and the five seasons of the show itself. The six other TV movies (In the Beginning, Thirdspace, River of Souls, Call to Arms, Legends of the Rangers and The Lost Tales) are not included at present, although some reports are saying they may be added next month. Spin-off series Crusade is also not included at this time.

Also, awkwardly, Amazon have not placed The Gathering at the start of Season 1. Instead, it's listed under "Bonus Material" at the bottom of the Season 1 list, after the Season 1 finale. You should watch The Gathering first, followed by Midnight on the Firing Line and then on from there.

Babylon 5 is a great show, but it takes a while to really start firing on all cylinders. The early episodes are there to set up the world and characters, and some of them aren't great on their own terms. If you get to Episode 4, Infection, and find it's unwatchably awful, the show's creator agrees with you noting that he occasionally wishes the negatives would fall off a pier somewhere). Season 1 starts really taking off with episodes like The Parliament of Dreams (Episode 5), And the Sky Full of Stars (Episode 8) and Signs and Portents (Episode 13), and the last few episodes of the season are all absolute hum-dingers.

My own episode guide to Babylon 5 starts here and may be of interest (and yes, I need to go back and do Season 5 which can also be hard going).
Posted by Adam Whitehead at 00:42