Wolfgang is a prisoner of BPO, but his fellow sensates have taken the enigmatic "Whispers" prisoner in turn. The two sides arrange a prisoner swap in Paris, but both are eager to double-cross the other and gain the upper hand in their clandestine war. For BPO, the sensates are a weapon and a resource to be exploited. All the sensates want is freedom. The two sides are poised for a final confrontation. 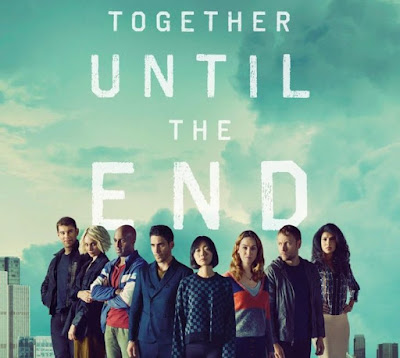 Sense8 is one of the oddest shows on television, an anthology show with eight main characters in which the central character of each story can call upon the skills and advice of the other seven, despite each story being very different in tone and ideas. It's also a show that is fairly over-brimming with positivity about humanity and about life. If the relentless cynicism of the likes of Game of Thrones and The Walking Dead gets too much for you, than Sense8 is the antidote, a show in which the characters can escape murderous torture, gun down some bad guys, and then get together with their cluster for a telepathically-communicated musical throwdown to Depeche Mode. As you do.

When Sense8 was cancelled after its second season, it was the raucous reception by the fans that saw Netflix agree to commission a TV movie to round off the story. This presented Lana Wachowski with a difficult choice to make. Sense8 was envisaged as a five-season project. With more than half of that material remaining, should she chuck all of that out and craft a simpler resolution to the story, or try to cram in another 36-odd episodes worth of plot into a single special? Her conclusion was to try to do a bit of both. So the central struggle of this finale is firmly on the sensates vs. BPO, with Whispers as the key in that conflict. That's fine and focused, but Wachowski also brings in a huge number of other elements which there is simply no time to develop, such as a neutral council of sensates who have so far stayed out of the struggle but are now willing to support one side and then don't do very much. Some of this excess baggage should have been dropped.

Sense8's finale gives fans a lot more of what they've seen so far: our characters swapping skills, having emotional heart-to-hearts and a couple of musical numbers and party scenes, along with the show's standard, fantastic location filming (the use of Naples is excellent, but the actual use of the real Eiffel Tower for the grand finale is jaw-dropping). However, it also drops the characters' individual storylines to focus on the grand mystery. This is possibly unwise, as the show's central storyline of shadowy government or trans-national organisations and mysteries dating back decades always felt a bit undercooked and took too much time away from the characters (a similar problem to Orphan Black and latter-day Lost). Still, at least the finale straightens out the show's mythology and resolves it with admirable efficiency.

Possibly less successful is the decision to pay off every single character in the show. And I mean every single character. Sylvester McCoy's elderly sensate has a part to play, as does Wolfgang's Conan the Barbarian-quoting best friend, and Kala's eternally confused husband and Capheus's political team and Will's cop partner from Chicago and Riley's chill hippy dad and Nomi's transphobic/homophobic mother and Sun's Korean cop nemesis/boyfriend and that bald girl from the second season and Angelica and her cluster (despite them all being dead) and pretty much everyone who hasn't been killed off. Jamming all of these characters into the special is nice, but unwieldy, massively self-indulgent and not very logical. Even worse, the proliferation of characters beyond the central eight means that some of the main cast of characters, most notably Capheus and Lito, don't really get much to do.

The finale also has some decidedly undercooked action scenes. Sense8's action scenes have always been phenomenal, the Wachowskis relishing their relatively low budget to get back to the ground-level tricks for shooting gunfights and martial arts they haven't had to employ since the original Matrix. For the finale, they clearly had much less money and time available than normal. The fight scenes feel perfunctory and the CG in the gunfights (to simulate bullet sparks) is poorly integrated with the live action. Given there's quite a few action scenes in the finale, this is definitely a bit of an issue, but ultimately a minor one.

But these questions of logistics and over-indulgence and logic are perhaps the wrong ones to address. Sense8 was a show about eight well-drawn characters from completely different backgrounds coming together and finding commonality despite their very different origins, and overcoming the obstacles in the way. The show wasn't perfect - bum dialogue and a tendency to schmaltz dogged it from early on - but its flaws were often endearing, its characters resolutely human and its message determinedly hopeful. Hopefully we will see its like again.

Sense8's finale (****) is available to watch on Netflix worldwide now, along with the rest of the series.
Posted by Adam Whitehead at 23:13

'...and then get together with their cluster for a telepathically-communicated musical throwdown to Depeche Mode...'

There's 3 in 24 episodes. Which to be fair is 3 more than in most shows, but it's not exactly something that overwhelms every second of the show.