Grimoak Press have announced they are releasing new, limited and illustrated editions of Raymond E. Feist's Riftwar Saga and the Empire Trilogy, co-written by Feist and Janny Wurts. 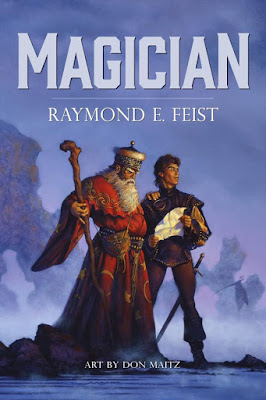 Fantasy artist Don Maitz will be handling both cover and interior artwork. Magician, Feist's seminal first novel, is first up for the treatment and will be followed by Silverthorn and A Darkness at Sethanon. Feist and Wurts' Empire Trilogy, usually acclaimed as one of the best epic fantasy trilogies of all time, will follow: Daughter of the Empire, Servant of the Empire and Mistress of the Empire.

Although much can be said about how the later books in the Riftwar Cycle (the 29-volume mega-series of which the Riftwar Saga and Empire Trilogy are the opening parts) went massively downhill, these early books are still exemplary, fun fantasy, the Empire Trilogy in particular impressive for its non-European setting, female protagonist and use of non-standard fantasy tropes.
Posted by Adam Whitehead at 19:05

Excuse my ignorance but who is the Gandalf in the picture? As I recall [spoiler!] Pug had no sage guidance when sent into the Black Robes wizard factory.