HBO has pulled the trigger on their plans for a Game of Thrones spin-off series, ordering a pilot from writer/producer/showrunner Jane Goldman. 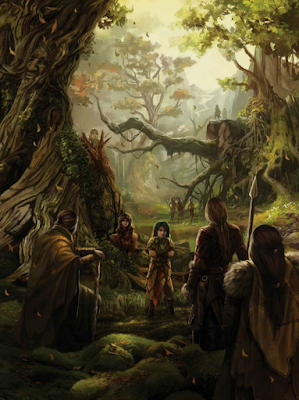 The First Men and the Children of the Forest forge the Pact on the Isle of Faces, thus beginning the Age of Heroes, four thousand years of peace that would end in the chaos and horror of the Long Night. Artwork by Magali Villeneuve for The World of Ice and Fire.

The spin-off series will be set in the Age of Heroes, the time period that began with the Pact - a peace treaty - being signed between the Children of the Forest (the original inhabitants of the continent of Westeros) and the invading First Men, and ended thousands of years later in the Long Night and the first war against the White Walkers. This is an intriguing time period, many thousands of years before the events of the series, with very little "canonical" information to go on. This will allow Goldman and her team of writers to create all-new stories in a much more primitive setting.

George R.R. Martin helped brainstorm ideas for the series as part of his longterm development contract with HBO, will be credited as a producer and will get a "story by" credit on the pilot, but will not take an active role in the series as he is focusing on completing the long-gestating sixth and (apparently) penultimate novel in the book series, The Winds of Winter.

Jane Goldman's involvement is particularly interesting. An experienced writer and producer, she wrote or co-wrote the scripts for Stardust, Kick-Ass, X-Men: First Class, X-Men: Days of Future Past, The Woman in Black, Kingsman and Kingsman: The Golden Circle. Game of Thrones producer Vince Gerardis will also work on the show as a producer, and Daniel Zelman (Damages, Bloodline) will also be working as a producer on the project. David Benioff and D.B. Weiss are likely to get an executive producer credit, but will have no day-to-day involvement as they will be moving from Game of Thrones' final season to developing a new Star Wars movie series for Lucasfilm next year.

The series doesn't have a title yet (although Game of Thrones: Age of Heroes sounds like it could work, in a sort of Masters of the Universe way...actually, they should think of something better) but it does have a logline:


"Taking place thousands of years before the events of Game of Thrones, the series chronicles the world’s descent from the golden Age of Heroes into its darkest hour. Only one thing is for sure: from the horrifying secrets of Westeros' history to the true origin of the White Walkers, the mysteries of the East to the Starks of legend… it's not the story we think we know."

Game of Thrones: The First Spin-Off will likely shoot its pilot next year and, if it gets a series order, will likely air in 2020 or 2021.

HBO are continuing to evaluate no less than four other pilot pitches for series set in the same world. Previously HBO have said they are likely to only order one to pilot, but this depends on the quality of the scripts they receive.
Posted by Adam Whitehead at 20:49

From some reports (the one from Deadline, especially) it would seem that GRRM's involvement was more than brainstorming. It reads "Created by Goldman & Martin and written by Goldman based on a story by her and Martin...", so it looks like they wrote an outline story that will be written into a series by Goldman. Not that it means that George will be actively involved in these further stages, of course.

That's Hollywoodese for George creating the story outline with Goldman, but Goldman being the one who went off to write it. It might be that Goldman actually wrote the outline and George just signed off on it, or vice versa.