The Ember Blade by Chris Wooding

Two great empires have dominated the east of Embria, the fall of the great subterranean empire of the urds heralding the rise of Ossia, protected by the Ember Blade and the sacred order of Dawnwardens. But thirty years ago Ossia was invaded in turn by Kroda, a kingdom of order, logic and science. Declaring itself the Third Empire, Kroda sees its destiny is to unite the continent through the Sword and the Word. 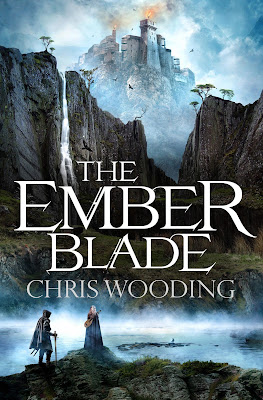 Although it is a land under occupation, life is good for many Ossians. The Krodans keep the bandits in check and the roads maintained. For young Aren, an Ossian noble son born into happy fortune, he sees his nation's destiny is in alliance with Kroda. That dream dies when he is betrayed by the empire he believes in. Left to rot in a prison camp, he is given an opportunity to strike back against his enemies...and help reclaim the Ember Blade.

Chris Wooding has been one of science fiction and fantasy's most interesting and restless voices for a long time now, moving from writing cracking YA reads to mature, thoughtful works of science fantasy like The Fade. His work in adult fantasy is mostly contained in the excellent Braided Path series, rooted in Asian mythology and influences, and the rollicking Tales of the Ketty Jay, a dieselpunk saga of airships, fighters, rampaging titans, surly cats and heroes whose buckles are, indeed, swashed.

The Darkwater Legacy is Wooding's back-to-basics take on the traditional fantasy saga (even the title feels like it was copyrighted in 1985). Ossia is a land under the grip of a cruel empire, a heroic band of freedom fighters are trying to save the day and a young man finds himself touched by destiny. It's like David Eddings, Margaret Weis, Tracey Hickman and Terry Brooks had a brainstorming session over a power lunch. If they did, though, then Wooding stole their notes, drank their beer and set about skewing everything slightly away from the way you think it's going to go.

The Ember Blade introduces us to Aren, the son of an Ossian noble who thinks himself destined for great things, unable to accept that his blood means that he will never be taken seriously by the Krodans. His best friend is Cade, a carpenter's son. They are separated by class and their feelings about the Krodan invaders, but they are soon bound together by profound misfortune. Along the way they meet up with a highly dubious warrior, thief and scoundrel, Grub the Skarl (master of the boastful non-sequitur), and a bunch of rebels led by the enigmatic "Hollow Man", before they find themselves on the run from supernatural trackers and gradually realise more is going on than it first appears. So far, so Lord of the Rings meets The Eye of the World. When our characters join forces with a druidess searching for a hero who is the fulfilment of prophecy and reach Skavenhald, a terrible ruin inhabited by a profound supernatural evil (Moria by way of Shadar Logoth, with a name that nods at Warhammer), you may be trying to keep your eyes from rolling. Wooding writes with skill but there's the feeling that maybe the traditional fantasy archetypes are being assembled a bit too familiarly here, as if assembled from an IKEA flatpack.

But then things get a lot more interesting. Skavenhald is weird and a distinctly Lovecraftian tone creeps in as screeching horrible things from other realms threaten to break through the skein of reality. It's more Dark Souls than Balrog Retirement Village, and all the better for it. After this the book becomes more engrossing as Wooding strips back the psychology of his characters, revealing them to be less the Fellowship of the Ring and more the Companions of Utter Dysfunction. One late-emerging main character is fascinating, a middle-aged teacher and patriot whose ruthlessness and resourcefulness dwarfs that of almost any of the other characters. The story takes several extremely unexpected swings (complete with a few shocking dispatches of characters you thought were around for the duration) before we reach the appropriately epic conclusion and the inevitably-frustrating wait for Book 2.

The Ember Blade is Wooding's longest novel to date - just under 800 pages in tradeback - but has more story in it than most entire trilogies. We have a prison break narrative, a horror story, a war story and an urban fantasy adventure. There's pirates, wolves, dodgy Viking warriors and some discomforting WWII allegories. One sequence feels like it's come out of Moby Dick, another out of Baldur's Gate. Wooding has had a frankly unseemly amount of fun in assembling his Big Fat Fantasy Saga and is keen to share that with the reader. The pages rattle by, the worldbuilding becomes more well-rounded and intriguing and the characters never stop growing and changing. It would be easy to condemn the author for writing "just" another throwback fantasy here, but it's also easy to forget that writing a good epic fantasy is still very difficult, and Wooding does it with aplomb.

The Ember Blade (****½) is great fun, a classic epic fantasy which, after a perhaps slightly too-traditional opening, avoids becoming too predictable. The characters are memorable and charismatic, but also flawed, with their darker moments that give them more edge than the one-note heroes of yesteryear. The tone is light and fun to start with, but matures throughout, with a few moments of real darkness at the end as things get real. The novel will be published on 20 September 2018 in the UK (and will be available on import in the USA).
Posted by Adam Whitehead at 19:59

Thanks for the advance review!