George R.R. Martin, a ton of fans and, er, the guy who founded Craigslist helped save THE EXPANSE

It was an impossible task: to convince Jeff Bezos, the richest man on Earth, to take mercy on the fans of an obscure science fiction show on SyFy and help save it after it had been cancelled. The fans rallied, sending cakes to Amazon TV headquarters, paying to fly a plane overhead for four hours with a banner saying "#SAVETHEEXPANSE" and even sending a model of the spaceship in the show, into space on a balloon. 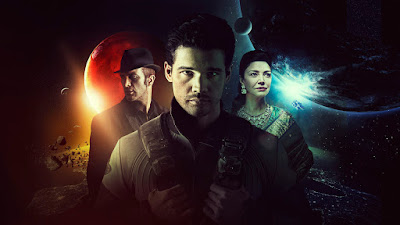 It all paid off. According to Jennifer Salke, the head of Amazon Studios, the outpouring of fan affection certainly helped save the show (along with sending her cake), but also key was a lot of critics recommending she watch the show (Bezos was already reportedly a fan of the books), which she did, bingeing the available episodes in just a couple of days. In an amusing moment, she confirms that Bezos was also receiving emails from the likes of George R.R. Martin and Craig Newmark (the founder of Craigslist) recommending he pick up the show.

Ultimately, Amazon decided to pick up the show and did the deal for the US rights from Alcon Entertainment. This is new information, as it suggests that Amazon may not yet have negotiated the international rights (currently held by Netflix), so we'll have to wait to hear about how fans outside the US will get to watch the show. Given that it was SyFy who insisted on the very silly six-month exclusivity period, it might be that, assuming Netflix holds onto the rights, future seasons will air much more closely with US transmission.
Posted by Adam Whitehead at 19:41