SF&F Questions: Has Disney turned a profit on its Lucasfilm purchase yet?

The Basics
In 2012 Disney bought Lucasfilm from founder George Lucas, paying $4.05 billion for the company, all of its assets and sub-divisions (including special effects company Industrial Light and Magic), and all of its franchises, most notably Star Wars and Indiana Jones.

A common question that's often been asked recently is if Disney has made back the money on this deal in the last four years, which has seen multiple Star Wars TV shows and video games made, along with dozens of novels and comics and, of course, four feature films (with many more coming).

The answer is that this is difficult to answer definitively - Disney are not exactly releasing detailed financials to the public - but we do have significant evidence to go on.


Profit from the Films: $1.5 billion
Disney, of course, have not just spent $4 billion on buying Lucasfilm, but have also spent significant money on producing the new movies and materials. For that reason we are not interested in the total gross of the movies, but the profit alone (as each film - with the possible exception of the underperforming Solo - has made a profit on an individual basis).

Fortunately, we have figures confirming the profit made from the new movies. This confirms that The Force Awakens made $780 million in pure profit for Disney and The Last Jedi made $415.5 million. That's around 1/3 of the total gross in each case (The Force Awakens' box office total was $2.06 billion and The Last Jedi was $1.3 billion). Extrapolating, Rogue One likely made around $300 million profit from its box office of $1.06 billion. Solo, at this rate, will struggle to break even at the box office and will likely rely on future home media and streaming releases to carry it across the line, so that can be disregarded for now.


Profit from Media Releases: $1 billion
These figures are harder to come by, but it has been confirmed that The Force Awakens has made $151 million in Blu-Ray sales in the USA alone, followed by Rogue One at $66 million and The Last Jedi at $56 million. Worldwide figures can comfortably double this and DVD sales (as DVD remains, bizarrely, a strong-selling format) can double that again. This is also not including media releases from The Clone Wars and Rebels, and Disney's legacy re-release of the original six movies in multiple formats.

Streaming rights to different channels worldwide is also a significant income. I would bet that the home media releases in varying formats match the $1.5 billion made by the films (matching the profitability of the original franchise at the moment Disney bought it in 2012, where home media and box office were at parity), but certainly well in excess of $1 billion.


Profit from the Toys: $300 million
Star Wars has been a phenomenon in toy sales, with combined action figure, vehicle, playset, Lego and costume sales exceeding an astonishing $14 billion by 2012. Sales since then have been more modest (a reflection of kids spending more time and money on video games and mobile devices than physical toys), but Star Wars was still the biggest-selling toy franchise in 2015 and 2016 before falling to second place in 2017. Star Wars toy sales exceeded $700 million in fiscal year 2015-16, did slightly less in 2016-17 and a lot less in 2017-18 (so far), the latter surprising as it's the first fiscal year to see two Star Wars movies released.

Thanks to Netflix documentary series The Toys That Made Us, we know that Lucasfilm's deal with Hasbro (inherited by Disney) gives them 16% of the income from the toys. Assuming $1.75 billion from toy income since 2015, this takes us up to around $280 million conservative.

These figures doesn't appear to include the adult collectable market (which is small in overall numbers but huge in margin), books, comic books, collected graphic novels and the adult-oriented board games and miniature games from Fantasy Flight. Crucially, this figure also doesn't include early sales from 2012-15 as well. On this basis, Disney's merchandising sales likely far exceed $300 million in terms of pure profit. 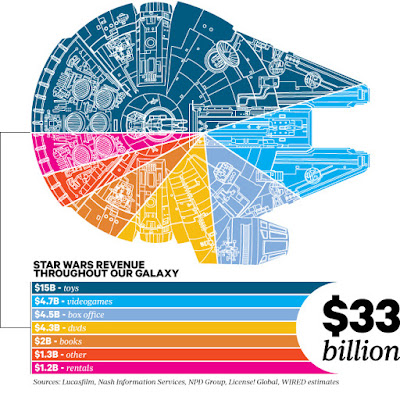 The total sales and profits of the Star Wars franchise between 1977 and 2012.


Video Games: $500 million
There have been two major video game releases since Disney took over the franchise: Star Wars Battlefront (2015) and Star Wars Battlefront II (2017), along with several spin-off Lego video games and legacy sales of earlier titles. Many classic Star Wars games have recently been released on the GoG store and have cumulatively sold hundreds of thousands of new copies. The MMORPG Star Wars: The Old Republic has also generated significant income ($140 million in 2013 alone, for example).

We are predominantly interested in the performance of the two Battlefront games. Together, the two titles have sold 22 million copies, Battlefront accounting for 14 million copies sold and Battlefront II about 8 million. This would generate almost $1.5 billion in revenue. Disney's cut is rumoured to be around 30% (which would certainly explain Electronic Arts' bizarre claims about the games "disappointing" in their performance, since their cut is significantly reduced), which gives us an approximate figure of $500 million in profit to Disney. This figure does not include Disney's cut of microtransactions or income from mobile games and services, which are also significant.


Industrial Light and Magic: $1 billion
When Disney bought Lucasfilm in 2012, they also acquired Industrial Light and Magic, a division of Lucasfilm that provides visual effects to the film industry. Since the 1980s, ILM has consistently been the largest and most successful provider of visual effects to the global film industry, despite challenges from the likes of Weta Digital and Framestore.

We know that ILM made over $180 million per year in the late 1990s, at a time when the global effects market was small fraction of its present day size. As a wholly-owned subsidiary of Lucasfilm and in turn Disney, ILM's profits are a mystery, but they appear to be significant, and certainly far higher than in 1997. The company is the largest employer of digital effects specialists in Hollywood, it has the largest render farm in the industry and it is capable of tackling half a dozen large movies simultaneously. As well as the Star Wars movies, it works on the Marvel Cinematic Universe and Disney's new live-action division, as well as providing visual effects for the Transformers franchise.

A reasonable and massively conservative estimate of ILM's profits would be $200 million per year, every year, in 2013-17. This is likely a gross underestimate, not accounting for the sheer magnitude of ILM's global operations and work on dozens of films in multiple countries and franchises. As ILM charges a flat market fee (which is not dependent on the film's final performance, so they still get paid regardless of the film's performance), this gives them a commanding presence in the industry.


Final Tally: $4.3 billion
The final and highly conservative tally falls somewhere around $4.3 billion in pure profit garnered by Disney since 2012. There are significant shortfalls in these figures, however. We don't know what revenues the TV series Star Wars: Rebels have brought in, or the novels or comics (it should be noted that the novels and comics were highly profitable in the pre-2012 era, cumulatively bringing in over $2 billion in profit), nor the amusement park rides and attractions.

The final figure will be somewhat higher than this.


Answer: Since the takeover by Disney, Lucasfilm's franchises and divisions have brought in well over $4 billion in profit alone. George Lucas may have even significantly underestimated the value of the company when he sold. Disney are now comfortably in profit on the overall deal.

Thank you for reading The Wertzone. To help me provide better content, please consider contributing to my Patreon page and other funding methods, which will also get you exclusive content weeks before it goes live on my blogs. SF&F Questions and The Cities of Fantasy series are debuting on my Patreon feed and you can read them there one month before being published on the Wertzone.
Posted by Adam Whitehead at 15:06

Nice article! You don't consider the alternative cost though,IE what the money would have made had it not been spent on Star Wars.

Had they invested in just small stock their annual return estimated conservatively would have been 7%, giving Disney in excess of 6 billion dollars.

In other words, Disney's investment in Star Wars is currently operating at a 1.7 billion loss compared to just investing in the stock market.

Comparing it to Disney's overall profitability it gets even worse. Since Disney bought Star Wars they have had a net margin of 15-20%. One would hope that one of their star properties would match that.

Taking the lower bound we get 9.36 billion. Taking that minus the initial investment leaves us with 5.31 billion dollars. In other words Star Wars has not made back the investment yet it is also falling behind Disney in general.

In my previous post I wrote alternative cost when and I later realized that it's called opportunity cost in English. Sorry!

You are correct in that the amount of profit they have made from Lucasfilm properties is lower than the amount they have made from Marvel or Pixar. But Disney will have also factored in the reasoning for that - the traditionally much weaker performance of Star Wars overseas versus Marvel - and will have also counted the strengths, namely that Star Wars makes vastly more money in toys, books and video games than either Marvel or Pixar.