The British government has issued a posthumous apology to Alan Turing, the WWII cryptanalyst who broke the German Enigma codes. The machines he used to do so are generally regarded as the earliest direct predecessors to modern computing. He also developed the 'Turing tests' which are still the basis for determining how well a computer can emulate human thought (and SF novels frequently use the term 'Turing scale' to determine if an AI has become sentient or self-aware). 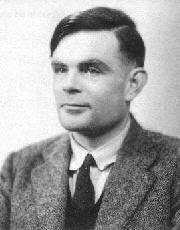 Despite his absolutely vital work, which led to massive boosts in gaining intelligence for the Allies, Turing was prosecuted for gross indecency in 1952 after admitting to being in a homosexual relationship (the same charges which had been brought against Oscar Wilde). He was given a hormonal drug, a so-called 'chemical castration', which resulted in him, among other things, developing breasts, something which deeply humiliated him. His security clearance was revoked and he was unable to continue his studies into computing. He committed suicide two years later.

Gordon Brown issued the apology today, acknowledging that the British government let down a man they owed a tremendous debt to.

It could have come sooner, a lot sooner, but with the 70th anniversary of WWII now underway, I suppose it's a good time to issue this apology and draw more attention to one of our more under-sung heroes of the Second World War.

In a more direct SF&F-related role, he also has a cameo appearance in Neal Stephenson's Cryptonomicon.
Posted by Adam Whitehead at 23:56

You should read Eat Reecebread by Peter F. Hamilton. A short story that just screams Turing, without actually mentioning his name. Incidentally I've read it just before I heard about this shameful story. Made an impact.