The mighty Jade Empire spans a vast amount of territory, protected by the Wall and ruled over by the Emperor, who commands a huge army, an elite cadre of warriors known as the Lotus Assassins and a fleet of heavily-armed aircraft. In a sleepy village called Two Rivers, Master Li runs a school teaching students in the ways of martial arts. Two of his students show high promise. When the school is attacked and Master Li is captured by the Lotus Assassins, his students have to make their way to the Imperial City and learn what is going on. 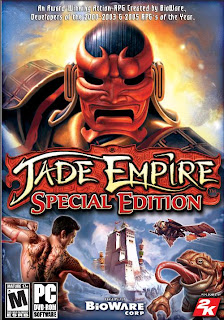 Jade Empire is a relatively minor entry to the BioWare canon, although still a very good one. It was their first attempt to make an original game not reliant on any existing franchise (their earlier games were set in the Forgotten Realms or Star Wars settings). It was also a direct attempt to appeal to a wider audience. Whilst still definitely an RPG, the more stat-heavy elements and inventory management were reduced in favour of action. In fact, the game is more of a contextualised beat 'em up rather than an RPG, although still featuring all the moral choices, excellent characterisation and twisting storyline that we have come to expect from BioWare over the years.

The Eastern setting, in stark contrast to the traditional Western fantasy of the earlier Baldur's Gate games, is interesting, original and vivid. The art design in Jade Empire is fantastic, with lots of colourful backdrops and interesting architecture. Character models are also highly detailed. The Special Edition, which is exclusive to the PC, made use of an extra two years of development to radically enhance the graphics, AI and controls far beyond the original X-Box settings, resulting in a considerably stronger and far more attractive game. This turned out to be a good move, as on its release in early 2007 the PC version of Jade Empire's visuals were immediately compared to the fantastic-looking Oblivion and withstood the comparison very well.

The story is pretty good, although BioWare do dip into some of their traditional archetypes and character twists from previous games. They spin them enough to come up with something that is still quite compelling, but veterans of BioWare's previous games may find some twists and characters more than a little familiar. The characters are similarly very strong, from the huge grizzled warrior to the little girl (willingly) possessed by a friendly demon to the princess trying to restore honour to the land. As with previous BioWare games, chatting to your companions regularly will open up further conversations, reveal more secrets and may trigger entire side-missions you'd otherwise miss. Dialogue is consistently well-written and sometimes flat-out hilarious.

Combat is pretty impressive, although they fact that you directly control your actions and blows means that hardcore RPGers who prefer to just click once and leave their characters to it may not find it to their liking. Combat involves employing a number of different martial art styles, switching between them on the fly to confound the enemy. It's a very well-thought-out system that rewards experimentation and innovation.

So we've got a great story with great characters with great controls and great combat told through great graphics. So surely this should be a five starrer?

Well, it almost is, but a few problems do blight it. The RPG-lite approach works quite well and even seasoned roleplayers are likely to enjoy the story and combat system. However, the result is that you accumulate a vast amount of money through the game and have absolutely nothing to spend it on, aside from the odd stat-enhancing power-up. There is no armour to buy, only the occasional weapon (as you can only have one melee weapon with you at any time, and will rarely use it since unarmed combat is usually faster and does more damage) or stat-enhancing gems, but you find so many of them through the game anyway that it's unnecessary to buy any more. A more well-thought-out economic system or maybe just dropping the whole concept would have added more depth to the game.

In addition, the game feels truncated. At 20 hours or so, it's BioWare's shortest game (aside from Mass Effect, although you can expand that out a fair bit longer by doing repetitive and pointless side-missions). It's divided into seven chapters, but whilst you'll spend quite a long time on Chapters 3 and 4 (hub regions with lots of quests to do), you'll breeze through the last three in about two hours. Due to the game's short length (by BioWare standards, it's still longer than 90% of modern games), it's also much more difficult to get the most out of it: there isn't really enough time to talk to all your companions, use different ones on different missions and get all their side-quests. BioWare try to make this a virtue by allowing you to start over the game with your levelled-up character once you've finished it, making for a much tougher challenge, but it's a bit half-hearted.

The biggest problem, however, is that you only get to wander around with one companion at a time (as opposed to two in Knights of the Old Republic and Mass Effect, and five of them in Baldur's Gate) and they are next to useless in combat. In the time that you take to kill nine bad guys, for example, your companion will have chipped about 20% off the health bar of one of them, leaving them for you to finish off. Your allies are better employed in 'support' mode, where they boost your own abilities in combat. The cumulative effect of this is that Jade Empire is a game where you have ten or so companions involved in the story with you, but you might as well be playing alone for the duration for all the difference they make.

Still, given these problems and limitations Jade Empire (****½) remains a cracking, fun game to play. The Special Edition is available now on PC (UK, USA) whilst the standard version remains available on the X-Box (UK, USA).
Posted by Adam Whitehead at 16:59