In the 1950s, young Tallis Keeton forms an unusual bond with the woodland that lies beyond her house, Ryhope Wood. But she cannot enter the wood until she learns the true name of the meadow that separates it from her home. As she struggles to achieve this, she realises her brother Harry is lost in the woodland, and to find him she must seek out the realm of ice and fire in the heart of the wood, the realm known as Lavondyss... 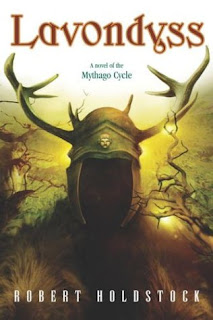 Lavondyss is a stand-alone companion novel to Robert Holdstock's earlier Mythago Wood. Although set after the earlier novel and exploring (tangentially) the fate of one of its characters, the book does not require foreknowledge of the first novel. Instead, it focuses on 13-year-old Tallis and her quest to find a way into the forest using rituals, masks and the power of myth and story.

Lavondyss is a brain-melting, complex novel that juggles a huge number of ideas and themes. Mythago Wood is an exemplary exploration of the ideas of mythology and where those images that resonate so strongly with us come from, but it's very much a high school diploma compared to Lavondyss' Ph.D in metamorphic imagery. Despite only being about 450 pages long, it took me weeks to read this book as I had to analyse and re-read almost every single paragraph to make sure I was grasping what the author was saying. Getting to the end and consulting the book's entry in The Encyclopedia of Fantasy, I'm still not entirely sure I did 'get' it in the end, but looking at other online reviews it appears that this reaction is not uncommon. Lavondyss is an astonishingly dense and layered novel that I suspect will require multiple re-reads before a true comprehension emerges. In this regard, it is reminiscent of the Book of the New Sun, complete with its own not entirely reliable narrator (a 13-year-old girl's understanding of the world and what is going on not being entirely reliable).

The book is rich in images and ideas, but it also works as an exploration of character, through Tallis, her father and Wynn-Jones (a character mentioned briefly in the first novel, but here fleshed out), and the nature of obsession also plays a role. Holdstock's powers of description remain impressive, and although there's less exploration of the actual woodland (we're nearly halfway through the book before a visit to the wood's interior takes place), Holdstock's formidable abilities to create a woodland environment and make it so real you can almost smell it remains intact.

Lavondyss is darker than its forebear, digging even deeper into the real roots of mythology, Celtic and otherwise, into the blood and earth and sacrifice that our ancient ancestors indulged in. It is not an easy or always a pleasant read, but it is always a fascinating and thought-provoking one.

Lavondyss (****½) is a rich, mind-bogglingly complex and dense novel that sucks you into its tangled branches. It is a hell of a difficult read, but is ultimately highly rewarding. It is available now in the UK (either by itself or as part of an omnibus with Mythago Wood) and in the USA.
Posted by Adam Whitehead at 00:58

Lavondyss may be one of my five favorite novels. It absolutely blew me away when I read it, um, I guess when it came out. Holdstock gets at stuff in this story that I think is tremendously difficult for writers to touch on, much less delve into and expose as he does.

I really need to pick up Mythago Wood. I've had it for a while, but haven't managed to start it yet - sounds like I'd better do so. Thanks for the review!

People have mixed feelings about this novel, a lot of folks seem to think Mythago Wood is much more palatable, but Lavondyss really enriches this world.

I love that cover btw, best cover of all of Holdstock's books.

Thanks for the recommendation. This sounds like an amazing book.

I believe that Lavondyss is the best fantasy novel I've ever read. Like you, I had to keep re-reading it, and I'm not 100% sure I actually know what happened... But it was jaw-droppingly superb.