Tim Powers' 1988 novel On Stranger Tides, featuring piracy and adventure on the high seas, has been an influential novel. A young Lucasfilm Games designer called Ron Gilbert read the novel, loved it, and used parts of it as inspiration for his classic Secret of Monkey Island computer game, along with Disney's 'Pirates of the Caribbean' adventure ride. In 2003 Disney released the Pirates of the Caribbean movie, a fine adventure yarn featuring a superb turn from Johnny Depp as Captain Jack Sparrow. It's storyline was also eyebrow-raisingly close to that of The Secret of Monkey Island (ghost pirates, unproven 'new' pirate hero, rescuing the governor/governor's daughter from the ghost pirate leader etc). 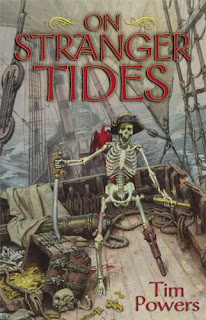 The movie was a huge success and two sequels followed. With the original movie working due to it being a fast-paced romp, the sequels naturally were slow-paced, grim-faced and overlong films which pretty much only worked through the sheer acting abilities of Depp (rejoined by Geoffrey Rush as able support in the third movie). The third film seemed to definitively close the story, but the fact that it became only the third film in history to take more than $1 billion at the box office meant further movies were inevitable. 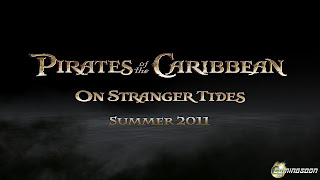 The fourth film was announced today as being named Pirates of the Caribbean: On Stranger Tides and (according to a report in the comments) that the fourth film will be a loose adaptation of Tim Powers' novel into the existing movie universe. Quite a lot of the book will have to be changed to reflect this (including the major characters), but Powers was amenable to the changes after getting a promise from Disney that Johnny Depp would have dinner with Powers and his wife and give them cameos in the film.*

An interesting choice. I wonder if this was a deliberate move and tip of the hat by the writers, or whether Disney was developing ideas that were close to the novel so they decided to snap up the rights to safeguard themselves? Either way, it should lead to multi-thousand percent increases in sales of the novel when the film comes out, which is a great result. And without Orlando Bloom and Keira Knightley, hopefully the new movie will be worth watching as well.

* Apprently this was a joke. What a missed opportunity!
Posted by Adam Whitehead at 01:51

Email ThisBlogThis!Share to TwitterShare to FacebookShare to Pinterest
Labels: on stranger tides, pirates of the caribbean, tim powers

I like that cover. Thanks for the heads-up on this book.

The remark about "dinner with Johnny Depp and cameo roles" was a joke!
-- Tim Powers

Well, at least it means the new movie should have a decent storyline, rather than the overblown tripe that was wheeled out in the third Pirates film. That really was an absolutely shit movie with barely any redeeming features.

Aww, I thought that remark about dinner with Depp was a fantastic idea.

"The remark about "dinner with Johnny Depp and cameo roles" was a joke!"

That was such a missed opportunity! :-)

Yay, the whole Turner/Swan thing really bummed me out, it was bearable in the first movie, but in the ohers it really got a bit on the annoying side.

Guess I'll buy the book and read it before the movie will skewer my perception of it, better safe than sorry. ;)

Wow! I'm not sure what the final product will turn out to be, but the source material is my favourite pirate book of all time. Congratulations to Mr Powers.

When I saw the trailer for the original Pirates film, I thought for an ecstatic moment that it was a preview for a film version of ON STRANGER TIDES. Obviously the ecstatic feeling faded quickly, though the film turned out to be quite decent. I'm thrilled that Mr. Powers' work is finally going to receive mass exposure to the general public.