Deep in the Pacific Ocean lies a chain of isolated islands which the reclusive Dr. Krieger has taken over in order to pursue his enigmatic 'research' into genetic engineering. Ex-special forces agent-turned-boat-captain Jack Carver is chartered to take an unusual young lady to the islands, but his boat promptly gets blown up by a bazooka. Before he knows what is going on, Jack's been drafted by the CIA and finds himself having to fight his way through multiple islands packed with heavy weaponry-wielding mercenaries and bizarre genetic mutants as well. 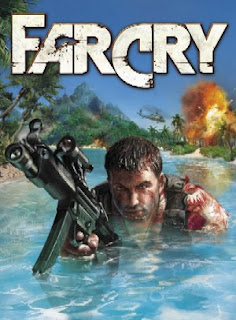 Far Cry was released in April 2004, with newbie developers CryTek getting their first game out ahead of that year's eagerly-anticipated Doom 3 and Half-Life 2. With the help of a demo tactically timed to come out two months before the game, the title blindsided many players who hadn't even heard of it before, but with its (for the time) awe-inspiring graphics and unusual amount of freedom for a first-person shooter, it quickly won over many fans. Although enjoyable, Doom 3 didn't really bring anything new to the table and its graphical thunder had definitely been stolen by Far Cry, and whilst Half-Life 2 did become a major success thanks to its tense, dramatic storyline and memorable characters, its extreme linearity did limit replayability.

Far Cry, despite a generic, corny story and a meathead protagonist, works so well because the game basically just sticks you on a boat or on the beach of an island with an objective, a gun, a hearty clap on the back and then lets you get on with it. There are multiple paths to each objective, some employing stealth, some allowing for a running-in-with-all-guns-blazing approach, sometimes with vehicles available for use, sometimes not.

This allows Far Cry to tap into the primeval appeal of the first-person shooter genre: running around with a gun shooting bad guys. All too often this very basic component of the genre is overlooked in favour of gimmicks like bullet-time or physics puzzles, but Far Cry puts it front-and-centre. Running around in the jungle outflanking squads of mercenaries, making use of cover, or shimmying up to a treehouse and deploying a sniper rifle to pick enemies off from 3km away is tremendously satisfying, as is executing a well-planned attack on a fortified enemy position after a careful and painstaking reconnaissance of the enemy position. You can use binoculars to 'mark' enemy troops on your radar which makes absolutely no sense in a literal context but gives you a feeling that recon missions are actually worthwhile. You also have a remote mike you can use to eavesdrop on enemy soldiers' conversations, which sometimes results in plot-advancing information or a random comic exchange, which adds to the game's atmosphere.

The game being five years old, it is now possible for most modern PCs to run the game with settings rammed up to the maximum. With the 1.4 version patch installed with new particle, smoke, haze and HD lighting effects, the game still looks jaw-droppingly good. Not as face-meltingly brilliant as Crysis with everything turned up to eleven, of course, but still pretty awesome. The sheer sense of scale is also incredible. These islands are vast and if you can see a location, you can probably travel there, whether it's by boat, car, hang-glider or on foot. In short, heavy weapons-driven ultraviolence has rarely looked so good or been so much fun.

There are several downers. Almost immediately noticeable is the total absence of a quick-save system in favour of a checkpoint system. Most of the time this is fine and it actually achieves its goal of making you genuinely think hard about your decisions, knowing that getting killed aimlessly will result in a 5-minute trek to get back to where you are right now. However, there are a few times when the checkpoints are way too far apart with several intense firefights and no health kits in between, and getting past those bits without ripping your monitor from its mount and hurling it through the window in rage can be quite difficult.

Rather more famous is the fact that whilst the mercenary enemies are clever, intelligent and satisfying opponents, the mutant enemies are a complete pain in the backside. Even the lowliest mutant grunts can jump about thirty feet through the air and kill you with one hit, and by the time the invisible ones armed with machine guns show up, the joke is starting to wear a little thin. That said, the mutants aren't actually the game-destroying factor they are sometimes represented as: unlike Crysis (where the human enemies vanish quite soon after the even more annoying aliens show up), the mutants and human enemies remain interspersed throughout the whole game, and the mutants actually disappear for quite long stretches of the later levels, but they are fairly irritating. Vehicle handling is also a bit on the oversensitive side and in some parts of the game walking is actually quicker than driving slowly so as not to wrap your jeep around the side of a tree.

As I mentioned earlier, the story is quite corny and your main character is a pretty unlikable dunderhead, but oddly this works in a sort of retro-1990s FPS flashback kind of way. Carver is cut from the same cloth as Duke Nuke'em (not quite so ludicrous though) and the fantastically-named John Blade from SiN, and his macho antics are almost endearing in an age of dark and tortured game heroes like that guy from FEAR and whatshisface from Splinter Cell.

But Far Cry is all about the gameplay, and the gameplay is superb. I played the game through from start to finish for about the fifth time for this review, and I was still finding new routes, new tactics and new combinations of weapons and vehicles to beat each map. Far Cry has greater replayability than almost any other FPS I can think of (discounting pseudo-RPGs like STALKER), even more than its quasi-successor Crysis. It is simply, an excellent and slightly underrated game.

A couple of words of clarification: there were several semi-spin-offs released on consoles with names such as Far Cry Instincts, which used a cut-down version of the main game engine and were not developed by CryTek. There is also an 'official' sequel called Far Cry 2 which has absolutely nothing to do with Far Cry at all and has had a very mixed reception.

Far Cry (*****) is available on the PC in the UK and USA. I'd steer clear of the X-Box conversions which are really not that great.
Posted by Adam Whitehead at 00:36

I bought a new computer in the fall of 2005 and the very first game I bought was Far Cry. My first hour with the game was amazing. When you haven't had a new computer in a while you are used to having to turn down all graphics on any relatively new games so the fact that I could turn up the detail and play a game was amazing. I played this game religiously until I got to the part with the mutants. That is when I lost interest and moved on to the million other games I had waiting. A few years later I went back and replayed Far Cry and eventually made it as far as I did the first time and, this time, determined to make it further. I think I played twenty minutes further the second time. The game's storyline was moving along fine until they threw in the sci-fi stuff. This is what ruined the game for me.

Ironically enough I purchased a new computer this year and one of the first games I played was Crysis. It definitely felt like the true sequel to Far Cry (Far Cry 2 felt like a bastard child). I even made it to the end.

Uncharted: Drake's Fortune is pretty much Far Cry but with a much better storyline. I am really looking forward to the sequel next month.

The way you opened that made it sound like something off 24.

This is a game I've never checked out before, strangely, but due to the Xbox conversions not being that good, it'll remain an unknown entity for me. I could buy it for the PC, but I don't do any PC gaming, really.

because this game i purchesed a new graphic card for 600$.it was worth the money,but after far cry there was a gap of games(or i was in a gap) and i played with my expensive gr.card spades on internet.